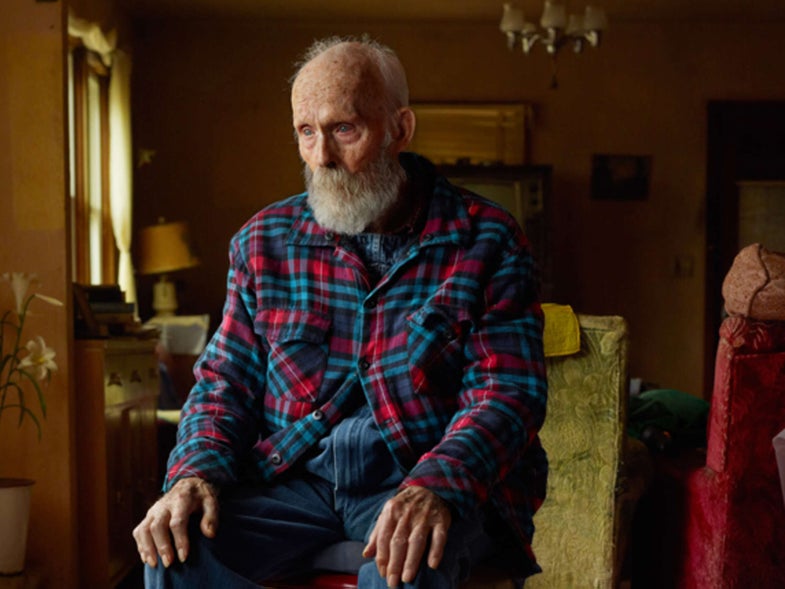 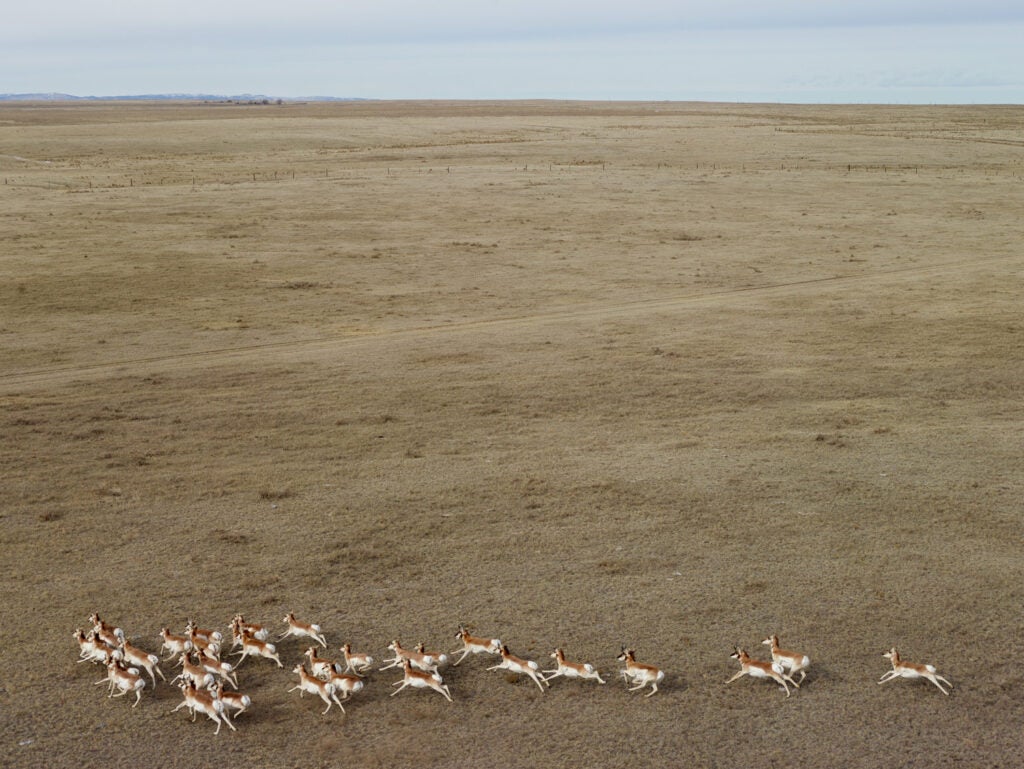 A herd of wild antelope, which in wintertime can number into the hundreds, roams the high plains that stretch towards the Big Horn Mountains in the background. Early pioneer cattlemen noticed that the native grass animals roaming this area tasted particularly good, and to this day Niobrara County grass has become famous among livestock buyers for the finish it gives cattle. 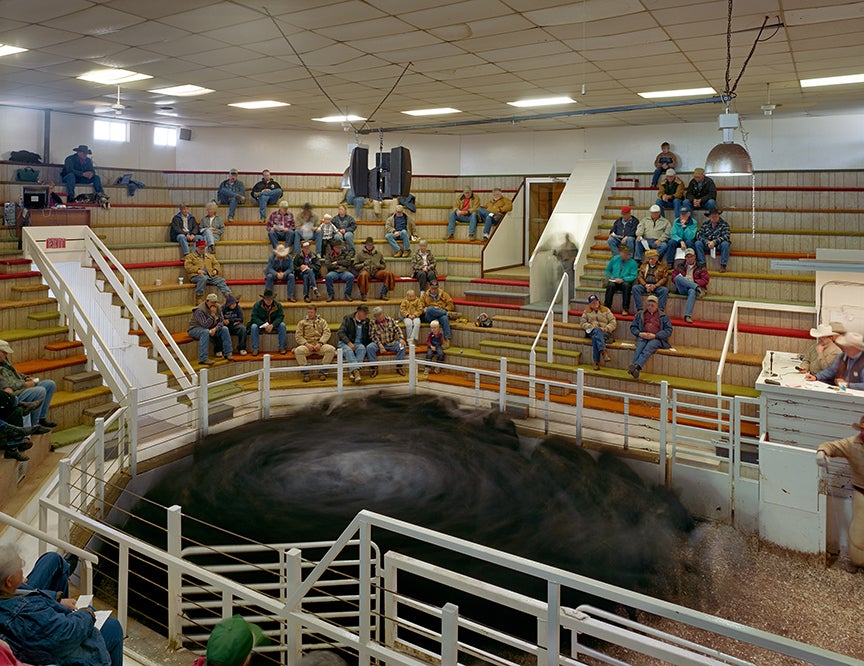 Bassett is one of the state’s top auction houses. But generally ranchers refer to these places as “sale barns.” Most towns of any size in cattle country have one. Be it for calves or cows, every rancher relies heavily on the sale barn to provide a market and buyers for his cattle. It is custom to stay until everyone’s livestock has been sold, no matter where your own cattle fall in the day’s program (the “poop sheet”), to show concern for your neighbors’ hard work. 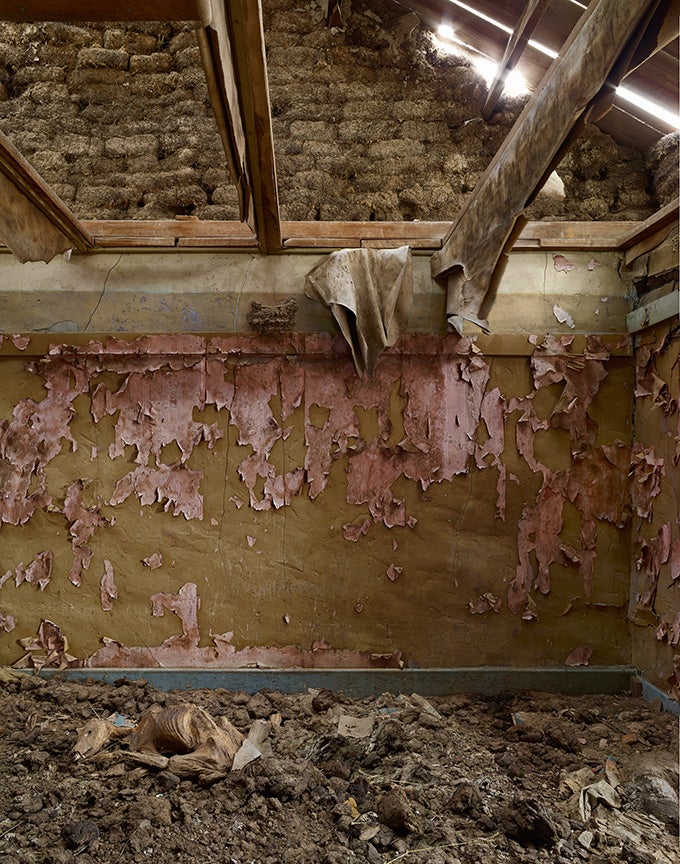 Mrs. Ferrell is said to have remarked that this one-and-a-half-story sod house was the warmest home she ever lived in. Homesteaders often built them because of the low costs and simplicity of construction. Sod was cut into ribbons three to six inches thick and one to three feet long, with the grass-side down, staggering the seams to form the walls. Two or three of these ribbons gave the walls thickness, and on every fourth layer sod bricks were laid crosswise for added strength. Some sod houses have been plastered over, fitted with new roofs and are still in use; unrestored examples are extremely rare. The skeletal remains here are those of a coyote. 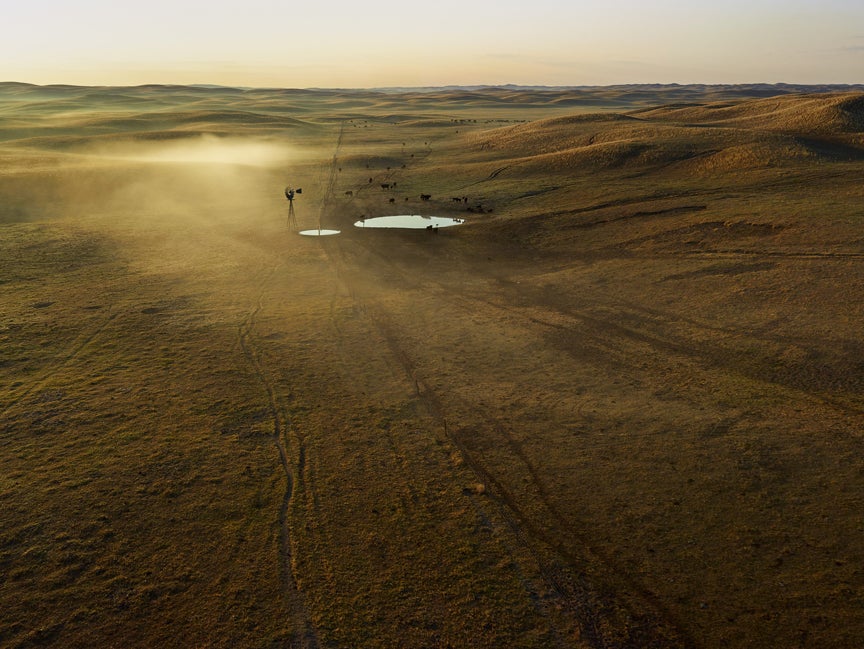 Cattle and a heron share a drink at the tank in the residual morning fog. Much of the success of cattle ranching in the Sandhills is due to the shallow reach down to the Ogallala Aquifer. In some places it’s only six feet to water, so one can easily and cheaply put down a windmill in order to water livestock anywhere in the vastness of this terrain. (There are many sub-irrigated meadows that provide hay at the driest of times.) The hilly landscape provides the herd with protection from the wind and snow. However the quality of the grass is not as good as on hard soil land, so it can still take twenty to thirty acres to support just one cow/calf pair. 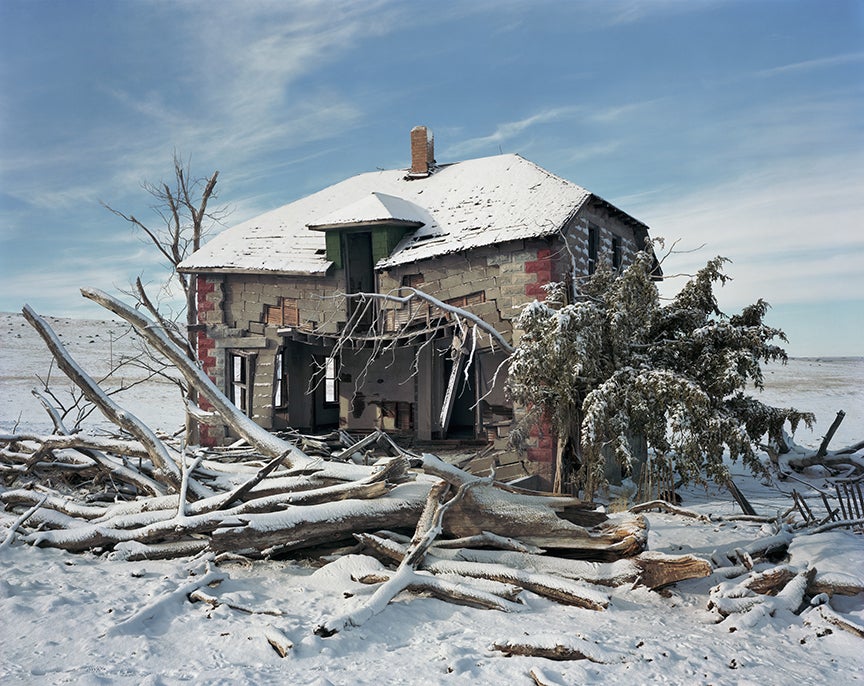 Susie Fehr Grossenbacher’s homestead was the scene of many parties, dances and other fancy affairs. For such events, guests might arrive in the late afternoon, be served dinner at midnight, and depart after breakfast. She was the sister of Mary Fehr Sandoz, the fourth wife of “Old Jules” Sandoz. The house is located between the Swiss-Beguin Cemetery and Old Jules’ home on the Niobrara. 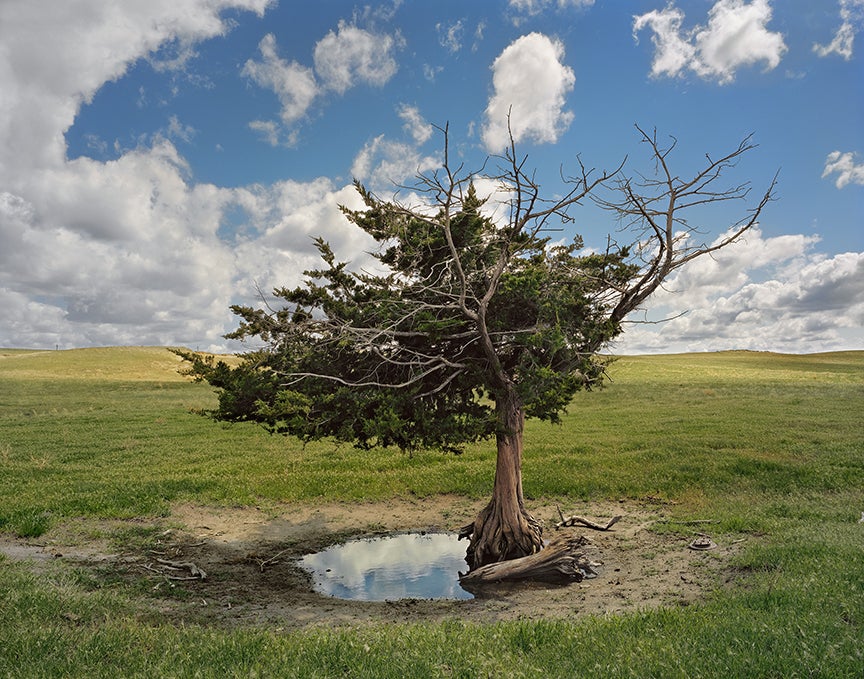 This tree originally stood in the yard of a two-story log house owned by Del Hatten. As the story was related to me, one day his wife left him and went back to her parents; Del, who was drunk, went looking for her, took a shot at her on her folks’ porch and, although he missed her, he assumed she was dead and promptly rode down to the river and killed himself. He was originally buried just outside the little cemetery just down the road from this tree, although the unmarked grave is now inside the fence. 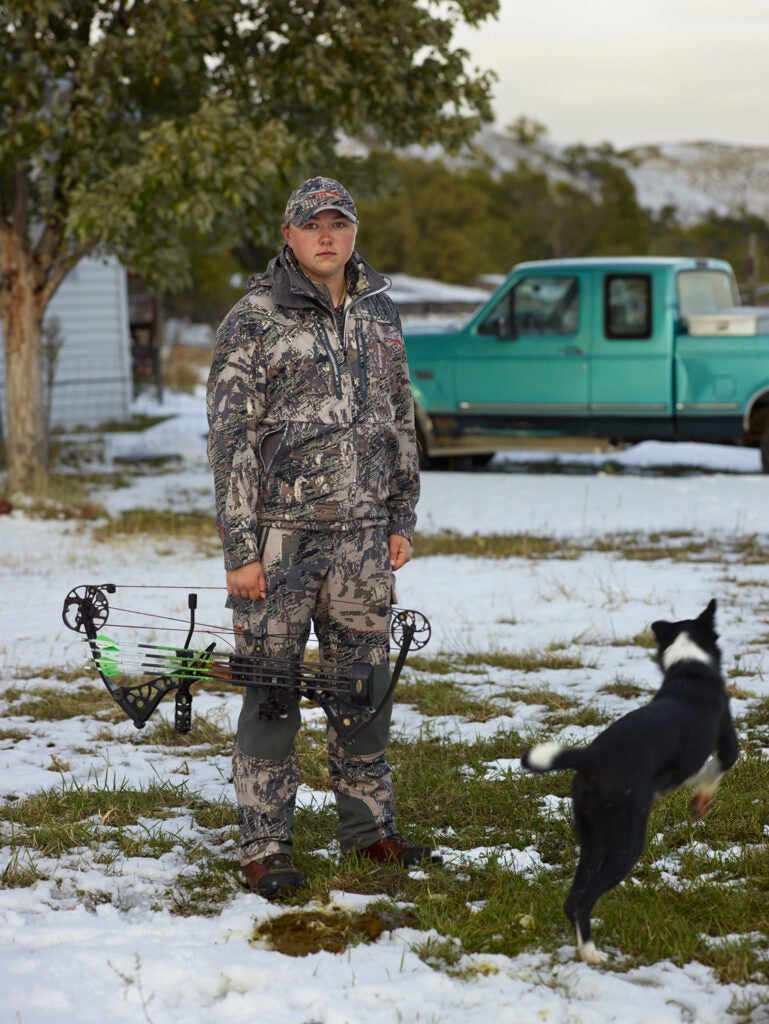 Jordan has been hunting since she was seven years old, and while she learned about firearms from her father, she taught herself the art of bow hunting through study and continual practice. The draw weight on her bow is about fifty-eight pounds, and although so far she’s only shot deer and turkey with it, it’s lethal enough for any game animal in the lower forty-eight states, including an elk, which she hopes to get soon. As she points out, “shot placement is the most important thing in archery as far as getting an animal.” 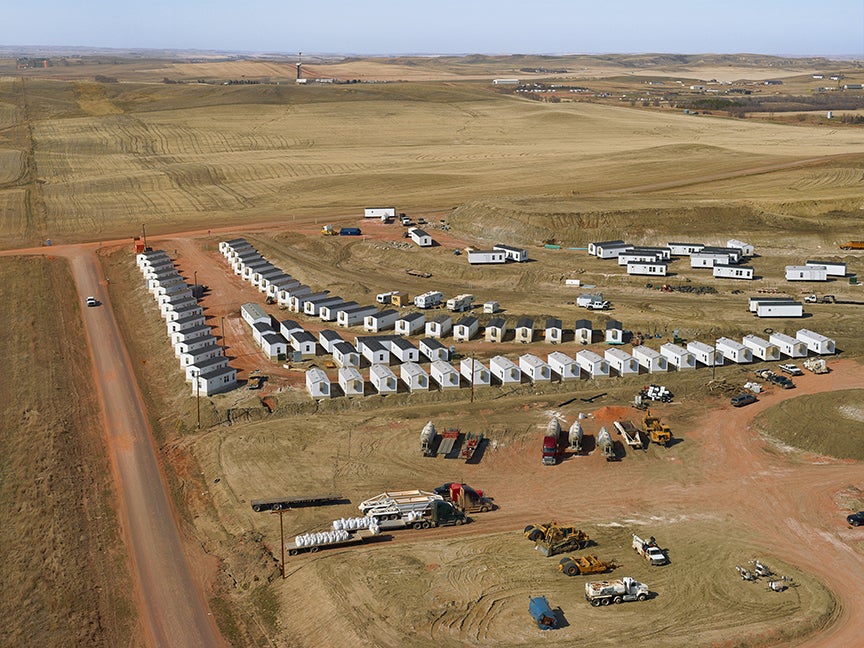 A new man-camp, built for workers at a hydraulic fracturing operation just south of Watford City. 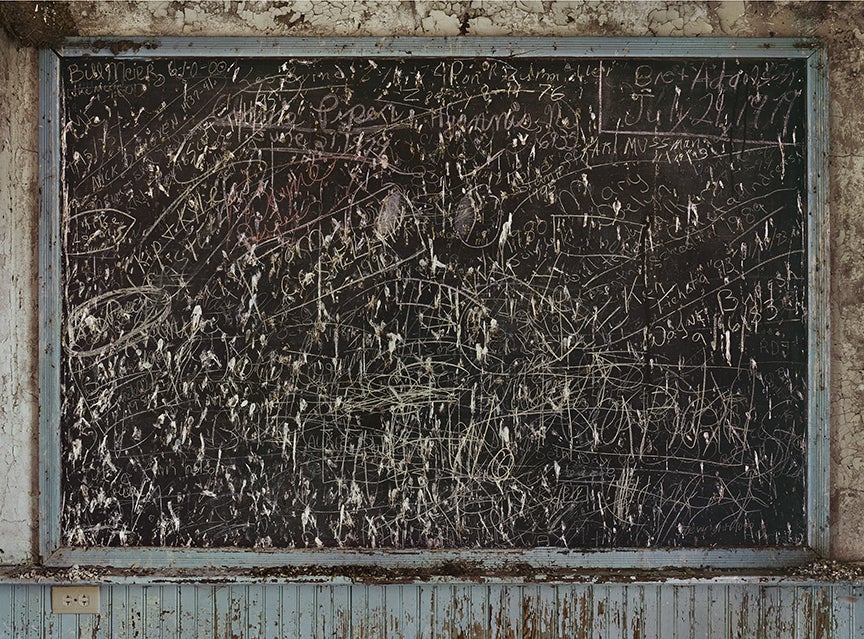 This blackboard is from a tiny rural school that served ranching families whose names can still be seen written on the board. This type of school, known as class-one, has been closed in recent years throughout the state; this one operated until 1966. 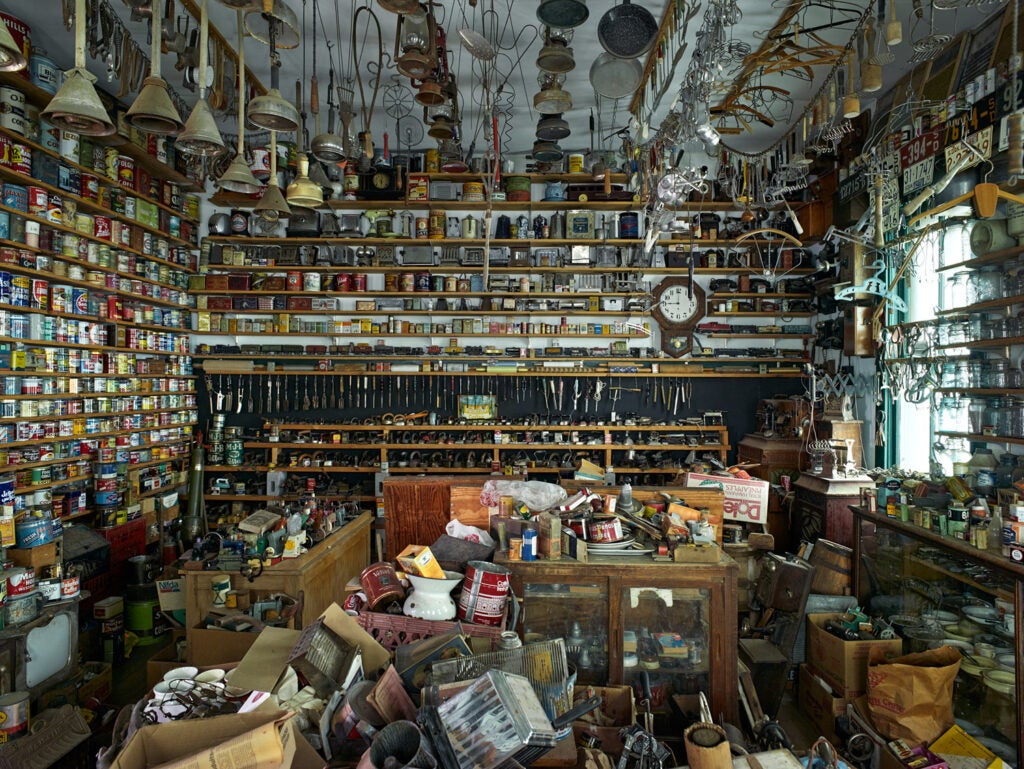 The schoolhouse was built at the turn of the century and known variously as the Ballard, Churn and District 123, and was used by local ranching families until 1966. Students always rode horseback to the school, and tragically, in 1957, a young boy froze to death while riding to the school during a sudden winter storm. As was often the case in the Sandhills after the passage of the Kinkaid Act and the influx of small farmers, the pasture is named after the man who homesteaded there, nicknamed “China” because his sister couldn’t pronounce his name. 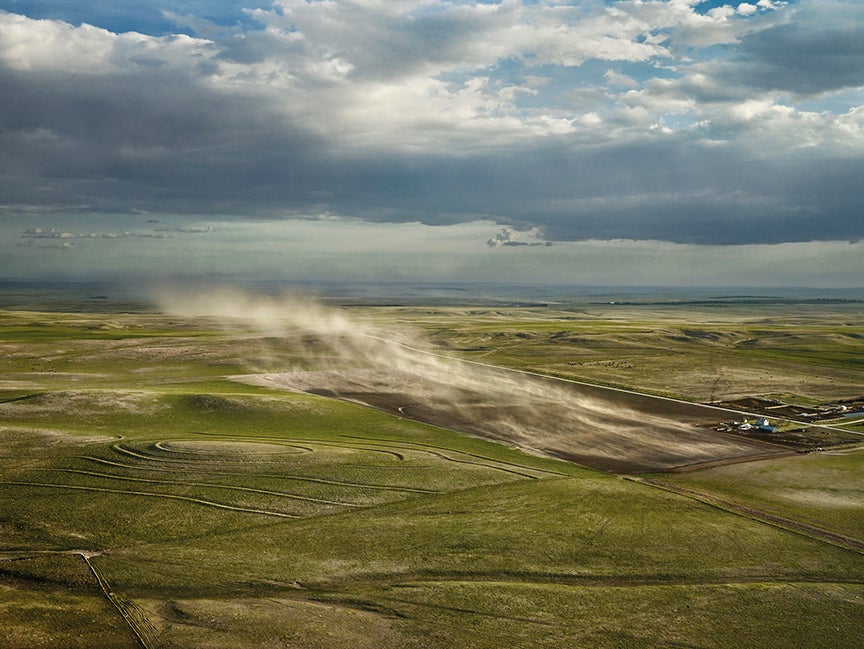 These dry, fallow lands and terraces lie to the southeast of Clinton. The wind coming out of the north was blowing at over seventy m.p.h. When choosing the angle of approach to a subject, Doug Dean piloted us if possible into a headwind, since that slowed the plane down and allowed a bit more time for picture-making. On this day we had little choice but to let a powerful tailwind take us on a Nantucket sleighride if we wanted to catch this billowing cloud of white dirt. 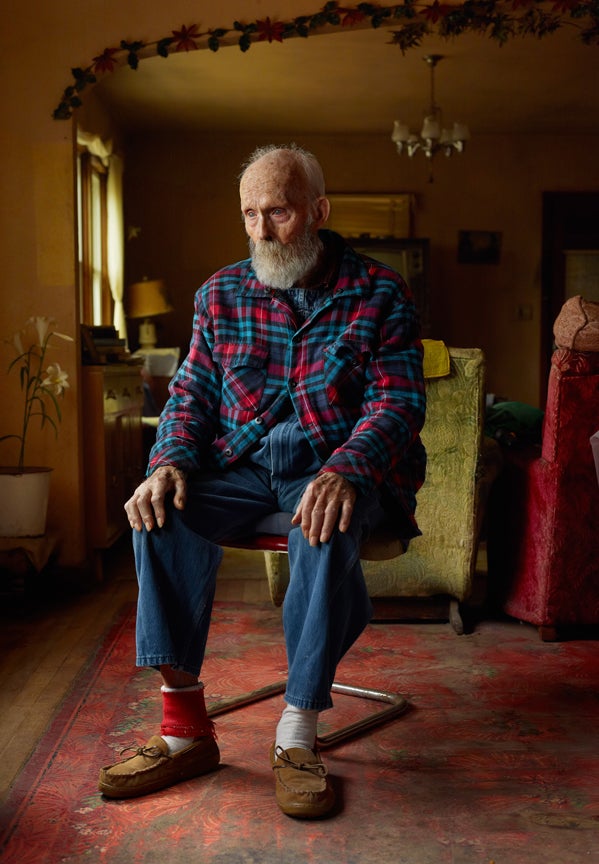 “In an old farmhouse accessible only by dirt cattle tracks, a ninety-two-year-old bachelor—Lynn Lincoln Bauer who’d spent all but two of those years within the borders of his family’s property—was enjoying the first hot water he felt from his taps in twenty-five years… Bauer goes by Teed, short for Teedie, a nickname drawn from his older brother’s childhood attempts to call him Sweetie as their mother did.” –Inara Verzemnieks 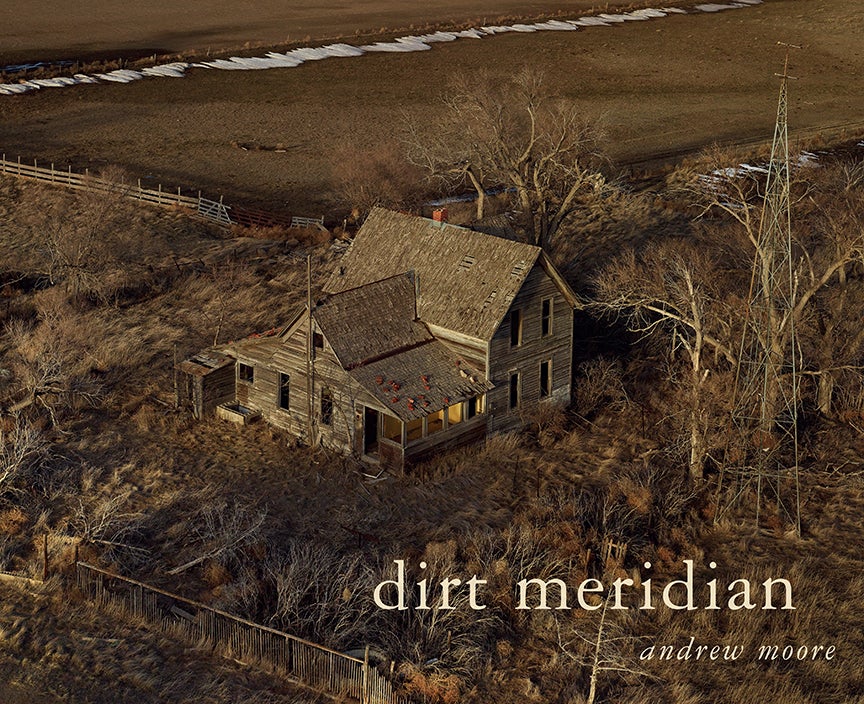 The first house on this site was built in the 1890s by the homesteader John Butler, a Swiss immigrant perhaps recruited by his countryman Jules Sandoz, the pioneer patriarch. During Prohibition the house was used for the illegal sale of alcohol; the still out back is long gone, but a bottle-drying rack remains in the basement. The Petersen family purchased it in 1944, and it is still owned by their son, Freeman. The tower to the right, on which TV antennas are aimed toward Chadron, originally held a windcharger, a wind-driven generator that powered household appliances and lights. Its replacement, a power pole from the Rural Electrification Administration in the 1950s, is just visible at the bottom of the frame.

Andrew Moore delivers striking vistas of the near West and portraits of its stoic inhabitants in Dirt Meridian, one of our Best Fall Photobooks of 2015. In it, Moore surveys the regions along the longitudinal divide between the verdant East and the arid West, known as the 100th Meridian. The region was first documented by the War Department, back before the United States Geological Survey was created to map and report on the outlying regions of the young country.

Back then, Timothy O’Sullivan and other photographers well known to history, shot some of the first images ever made of what was then called the Great American Desert. George Wheeler, who headed one of the first official forays into the territory in the 19th century reported that “the probable future agricultural population of the areas surveyed…will be governed as much, if not more, by the permanent supply of water than by the acreage available.”

Then as now, the land surrounding the western edge of the 100th meridian is expansive, dry and largely empty. Agriculture, cattle herding, mining and oil industries are intertwined with the history of the West, though the fortunes from these enterprises are hard-won at best. The people of the 100th meridian trace their histories through their relationship with the land. Like the region itself, they are an austere and rugged bunch.

Andrew Moore’s intimate portraits bring us into the homes of families and wizened ranchers whose descendants settled the high plains generations ago. One, “Uncle Teed” as he is referred to in the book, spent all but two of his more than 90 years within the boundaries of his family property in Nebraska. Also pictured are the Budds, a family of five who trace their ranching roots in Nebraska back several generations. Of their three daughters, their eldest Jordan, photographed by Moore in hunter’s camouflage, was trusted to sell the family’s herd of bulls at auction at the tender age of 13. A 2013 The New York Times Magazine article detailing the lives of Moore’s subjects accompanies the photographs in the book.

One of the joys of Dirt Meridian is how the book pairs these portraits with Moore’s dramatic images of the Western landscape. To achieve the bird’s-eye perspective that makes these photos so captivating, he worked with a Cesna pilot he befriended to fly him around. Moore mounted a PhaseOne high-resolution digital medium format camera underneath the plane’s wing with a robotic gimbal. Tethering the camera to a laptop inside the Cesna, Moore was able to compose and take photos from his computer as the pilot flew them low over the landscape. His images record seemingly endless fences, rolling low hills, derelict homesteads, solitary windmills and newly-built tract houses for oil workers.

Moore’s landscapes tell a story that is both timeless and relevant. The economic impact of energy exploration in the area has never been stable. Recent population booms in the oil shale fields of North Dakota recall Colorado’s gold rush, the legacy of which made headlines some weeks ago when waste water from an abandoned mine burst into a local river, polluting it with lead and cadmium. Exploration and extraction of petroleum resources of the type the Dakotas have seen recently can lead to rising land prices. Increasing property values put an even greater burden on old ranching families who see fewer and fewer returns from their efforts. Moore’s signature attention to dereliction is used in great effect in this book to underline the precarious livelihoods of those who have eked out a life in the hardscrabble expanse along the 100th meridian.