The photographer celebrates the way the internet is bringing people together. 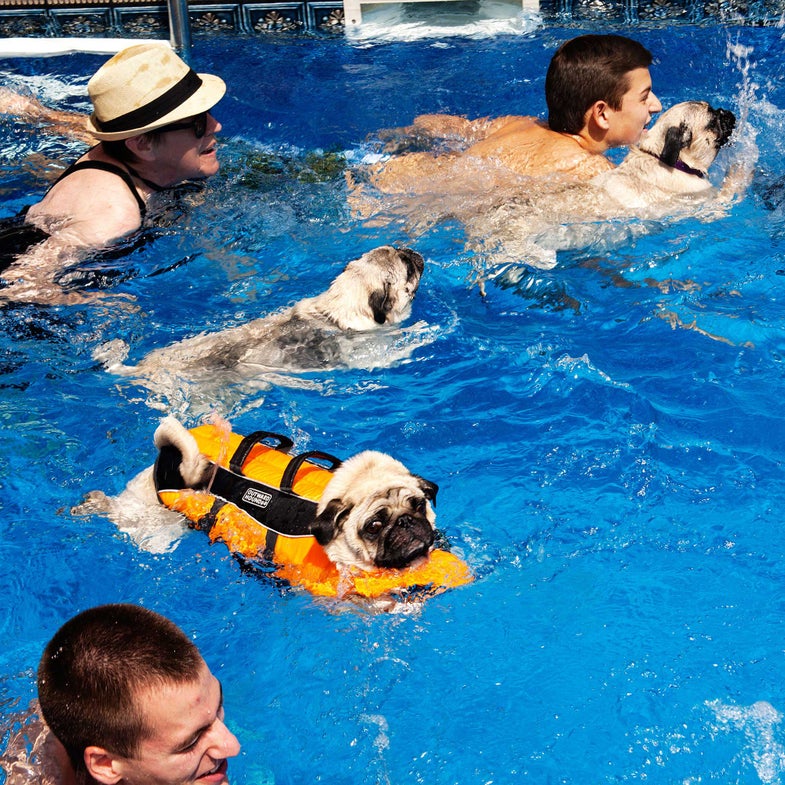 In today’s online world, everything is designed to grab your attention, but nothing is designed to hold it. You click into a hyperbolic headline about something crazy that you wouldn’t believe, but you leave shortly after when you realize it’s actually something quite normal that you would believe. Yet, there are places that hold your attention, and these are the places that interest Amy Lombard. Having come up in the digital age, Lombard intrinsically understands the value in online communities, and her empathy for her subjects gives her photographs a certain depth that helps us to connect with the people in them.

Lombard has spent the past three years photographing myriad online meetup groups: from Harry Potter fans to pug owners. The work is collected in a new self-published book called Connected that was made possible by the VSCO Artist Initiative.

Lombard spoke with American Photo about what makes a project, swimming with pugs and the nerve-wracking process of making a book.

How much of a role did empathy play in making these pictures?

Empathy is something that’s important to my work, not even just specific to this project, but for everything that I do. With this work, it would be easy to go around and be like, “Oh, look at this bizarre chihuahua meetup,” “Look at these Harry Potter folks.” That would’ve been the easy way to go about it, right? I wanted to understand what’s bringing these people to this place and to understand their relationships with each other. The one thing that always drives me crazy is when somebody takes something at face value: “Oh, you just photographed a bunch of weird groups around the United States.” It’s not weird at all because everybody has their thing. Empathy is huge.

This book is refreshing in that it makes the case that the internet is not nearly as isolating as some would have you believe. What was one of the biggest surprises you found in the course of putting this together and seeing how connected people are?

I think the biggest surprise really came that first meetup.

The Staten Island pug meetup. They have this annual pool party and this was at a time when I was photographing [a lot of] animals. I was interested in our relationship with animals in a cultural context. When I got there, I realized that the internet was what was facilitating this community. Like you said, people talk constantly about how technology is pulling us apart, but when you’re in a room with 30 people who are all coming together with something so specific from the internet, that’s pretty powerful to me. It’s so much a choice to be alone at this point. At what other point in time could you go and find a pug pool party?

Were there meetups that you wanted to get access to but couldn’t?

One that sticks out was a cuddle meetup. They weren’t into it because it’s obviously a very private, intimate event. When you get outside of New York or a major city and you’re asking people to come and spend time with them and photograph them, it’s like, “I don’t understand why this lady with a camera is here.” So there’s an element of not trusting me, which I understand.

It seems to me that trust is a pretty sacred thing, and it can be a difficult currency to attain when you’re coming to it from the outside. Was the process of gaining trust in these groups fairly similar across the board or were there differences from group to group?

There’s definitely differences from group to group. Sometimes people are just excited that you’re there from the get-go. But then, of course, sometimes people are skeptical. They don’t know your work. They don’t know what you do. So it takes a little bit of coercing and being sympathetic that this isn’t a super ordinary thing for most people. So I just try to be as understanding about those things as possible.

Another thing that struck me about the book was that all the images are square. Why did you choose the square format?

I’ve always been pro-square. When I started photographing, I learned on 35mm, obviously. I knew that I did not want to be shooting that.

I love how even everything is—I love creating a composition in a square. The square was a natural thing for me to do at the time. This book is so much about internet culture. Now it’s like we look at a square and people think Instagram.

This book was made possible in part by VSCO. At what point in the project did VSCO come into play, and how did that all unfold?

VSCO came into play in 2015. After the pug meetup, I would find a group online and it was mostly just exploring the communities that I was interested in. And after a little while, I was like, “I feel like there’s something here. I feel like this could be a larger project. Is this a story? Is this a story I do on my own?” I pitched the idea to a few different people I worked with and it wasn’t sticking, so I just thought, “I don’t want to give this up. I don’t want someone else’s name on it.” I was looking into grants, and I had seen the VSCO Artist Initiative because a few people I knew had gotten it. And as you know, a lot of the time when you apply for grants or awards, it’s always the same people who get it. It’s so annoying.

For the rest of us, it’s like throwing darts blindfolded.

Yes, exactly, and particularly for me, because as a documentary photographer my work isn’t about social injustice or things that are affecting our daily lives in a political way—people don’t take me seriously for that. So when I was applying for it, I was just like, “Well, this is a shot in the dark.” Then I ended up getting it somehow, and I really appreciate VSCO so much because they helped make this project come alive in so many ways. VSCO championed me from the start.

How did it feel to see the physical representation of everything you’ve been working on?

It was beyond nerve-wracking. Since this book was self-published, you learn so much about yourself, your work. God bless my designer Elysia Berman. She dealt with my crazy ass for months. She’s super particular about everything, down to the color of the red that was printing. Getting all of the books that day, I was like, “If one little thing is messed up. I am going to flip.” I saw it and I was like, “Everything looks good. This is just the biggest relief.” I had nightmares about it. I realized that I’ve become way more neurotic about my work in the last few years.

How many pictures were you editing down from?

I don’t even know. I’m one of those people who overshoots everything. So, the amount of space this has taken up on hard drives is truly insane.

What was one of the biggest things that you learned about yourself in the process of photographing this?

Around the time when I realized that I had something here, it forced me to think about my own work. Really, what is bringing me to this place? You really do have to play therapist on yourself. I think deeply about my interest in things in a really specific way and understanding my own personal experiences. My work doesn’t have to do with my own life most of the time.

Working on a project over a sustained period of time takes discipline. What advice would you give to someone who is having a tough time staying committed to a project they’ve started?

If somebody’s having a tough time staying committed, I don’t know if it’s the right project. I’ve always felt that if I wanted to do something, I’m going to do it. If you really wanted to do it, you would do it, and if there’s something holding you back in a certain project, maybe think deeply about what the cause of that is, if that has more to do with something personal than about the project itself. Commitment has never been an issue with photography for me because it’s all I have. It’s my life and my being and my soul. It’s never a question for me. There are many things that I don’t like about myself and that I’m insecure about. My work ethic is not one of them. I don’t know if other people feel the same way but if I want to do something, I’m going to do it and I’m going to see it through. And also when you announce a project and you don’t follow through, you look like an idiot.

Wise words. The book is lovely.

I’m glad you like it. It’s been quite the journey.

So actually through this project, I went to a gay square dancing meetup. It’s not in the book intentionally.

Because I wanted that to be it’s own thing. Square dancing is like a dying art. It’s primarily older people who do it now, but people don’t realize that you can square dance every single night of the week in most states. North Jersey alone has 20 square dancing clubs. And it’s weird because in New York City, there’s two or three. There’s gay clubs and then there’s what gay people call the straight clubs. Since going to that initial gay square dancing meetup, I’ve been traveling to different square dancing clubs around America. I applied for a few grants, got rejected. Get ‘em next time. It’s called United Squares. The pictures are so cute.

Do they exist in an online space?

Oh my God. No. They are not touching the internet at all until it’s something.