The triumph of a wallflower. 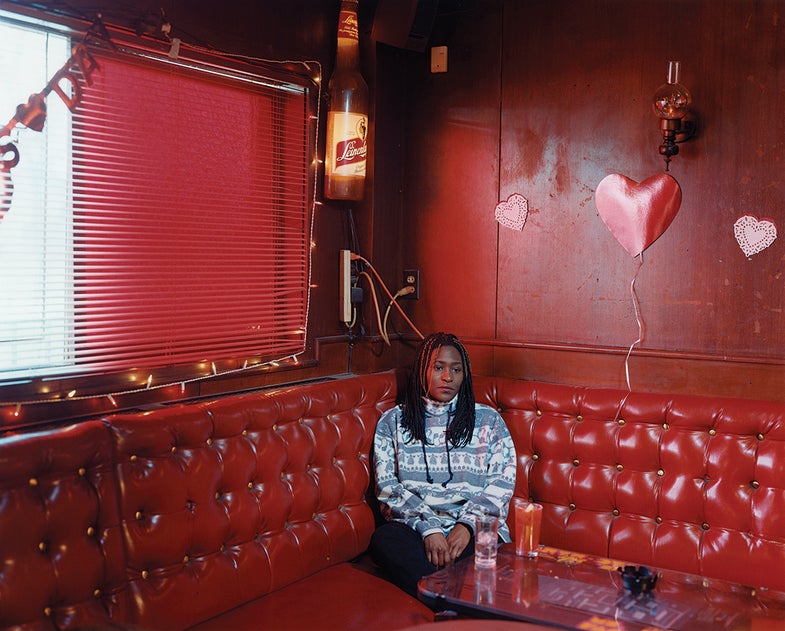 It’s a Friday in early August, and on the walls of the Joseloff Gallery at the University of Hartford hangs a student exhibition of the Hartford Art School’s MFA program in photography, where Alec Soth has been in residence this week. Throughout the wide-ranging installations a half dozen plain white tables are interspersed, on which sit stacks and stacks of books. Soth ambles in and takes a seat at one of them. “I’ve already done like 30 critiques this week,” he says, his voice deflated to a whisper. Clearly, sitting down for an interview is not high on his list of things he’d rather do right now. But Alec Soth is not one to be put off by a little challenge.

Admittedly shy as a kid, Soth (sounds like “both”) has demonstrated over his career—launched in 2004 with his breakout monograph Sleeping by the Mississippi (Steidl), which follows the big river to tell visual stories of the sometimes bleak lifestyles and often quirky personalities that dot Middle America, and evolving through the 2008 DIY publishing venture Little Brown Mushroom and recent live performance projects—that success comes from peeling yourself off the wall, engaging with others, and stepping to the front of the room.

This lesson is not lost on him, and he’s sensitive to it when he visits programs like Hartford’s. “There’s usually those people in the back who don’t say much, but you can see they have something going on,” he says. “I’ve always sympathized with that person, because I was that person.”

Today he still looks most at home sitting in a quiet space surrounded by books. “In the beginning books were important because it’s how I digested most of the work that I saw,” says the Twin Cities native, who studied fine art at Sarah Lawrence College in Yonkers, New York, and found his own voice in photography during a summer class at the University of Minnesota. “And I think photography, by virtue of the very medium, works well on paper and in pages. There’s a kind of control you have with a book. It’s repeatable; you can guide a narrative.” He picks up a perfectly bound portfolio and flips through its pages. “When I was starting out there was less emphasis on the book. Each student in this program is expected to produce a book and an exhibition, which I think is a big advancement in the medium.”

While Soth’s inherent inclination is to put his work between two covers, his own creative intuitions, wanderlusty projects from Mississippi to Dog Days Bogotá to Niagara, as well as the demands that come with international accolades (including a Guggenheim Fellowship in 2013) have led him to stretch beyond the borders of the printed page and outside the boundaries of the solitary shooter. “A lot of photographers are photographers because they like working alone. I got into it because I liked working alone,” he says. So in 2013 he held the Camp for Socially Awkward Storytellers, an event that brought 15 artists from around the world to Minneapolis for a week to find stories, make art, and, as a culminating mini thesis project, present it to an audience.

“They were super challenged because they didn’t know they were going to be doing that,” he says of his campers. But they rose to it: One student from China tried to meet people in the city; another artist interviewed people outside of a food co-op. “It was hugely successful—and a big life-changing thing for me,” Soth says. “I just knew it was going to lead to something else.”

Indeed. After the camp—in which Soth himself did not actually perform—karma came calling in 2014. “I got asked out of the blue by the Aperture Foundation to do a live event at their fundraiser,” Soth says with a sardonic chuckle, reflecting on the understatement. The fundraiser was to launch The Open Road, an anthology of influential American road photographs, by artists such as Ed Ruscha and Stephen Shore. The producers didn’t want him simply to show up and chat about his pictures; they were looking for a collaboration with creative potential. Inspired by the subject matter, Soth jumped in with both feet and reached out to musician and outspoken political activist Billy Bragg, whose longtime interest in American folk music is well known. It was like Luke meets Obi-Wan, rock star version.

“So we did this tour,” Soth says, “from Rock Island, Illinois, to Little Rock, Arkansas,” tracing the roots and lore around the song “Rock Island Line.” “I told the story and he sang the songs,” Soth says, with videographer Isaac Gale and folk musician Joe Purdy to document the tour in video and song. “I realized I had to put effort into it, but I started learning that there was creative potential in it,” Soth says.

Riding a collaborative wave, Soth paired with New York Times Sunday Magazine photo editor Stacey Baker on a story in which they encountered the perils of speed-dating and the comforting endurance of couples who’ve stuck together for decades. What began as an assignment for Pop Up Magazine turned into a TED talk in Vancouver. “I think there is something that can be conveyed with images and live events,” Soth says. “It’s challenging and it’s scary, which is good.”

After his Connecticut residency, he goes back to Minneapolis where he will host his latest experiment, the Winnebago Workshop. The “mobile photography lab for teenagers” merges the penchant for travel and storytelling at the core of his work; his recent collaborative experiments; a newfound desire to teach; and an old Thor Hurricane he’s had sitting in storage since he bought it for the Magnum project Postcards from America in 2011. Each day for a week, Soth, two other teaching artists, and about seven high school juniors and seniors will pile into the RV (“It’s sort of a Breaking Bad–mobile”) and set out on day trips to find stories and make art.

He sees teaching as a chance to contribute in a way he wouldn’t if he were only making photographs. “I think I’ve just hit an age in my life where I feel like I can possibly offer something educationally, and I’m so indebted to my high school teacher, who changed my life. I’m not convinced I’m capable of doing it, but I’m curious to try,” he says. The important thing is keeping it true to his DIY ethos and out of the confines of traditional education. “I want people who are not just looking for something that looks good on their college application, but for people who are the sort of oddballs, that have something going on that maybe we can open up,” he says.

As for his MFA students who may be less concerned about creative freedom and more worried about a career, he advises: “First of all, it is hard. And I’ve had tons of missteps along the way,” he says. “That’s the thing about being creative. You come up with creative solutions to problems. And that’s not just in your work, but in life.”