Abstract Photos Deconstruct One World Trade Center Upon Its Opening

Thirteen years after the 9/11 terrorist attacks on the Twin Towers in New York, One World Trade Center, towering 1776... 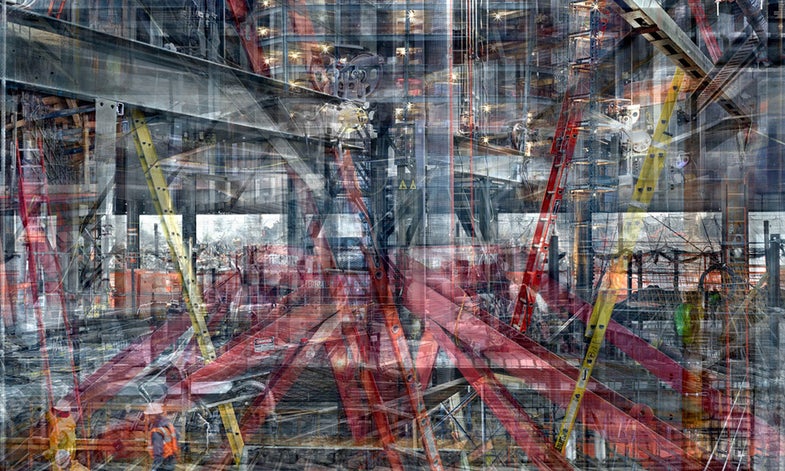 Thirteen years after the 9/11 terrorist attacks on the Twin Towers in New York, One World Trade Center, towering 1776 feet above the footprints of those iconic buildings, is finally set to open its doors at the end of this month. For now, it is the tallest building in the Western Hemisphere. Visible from the farthest reaches of this city, it will likely become one of the most commonly photographed structures in New York.

In it’s current iteration, 1 WTC, formerly known by the unfortunate epithet “Freedom Tower,” bears but the slightest resemblance to Daniel Libeskind inspired, award-winning design for the site originally accepted in 2003. The building has been alternatively criticized as a “shyscraper” and an icon of the architecture of “meh.” Adam Gopnik, who conversely considers it a “genuinely handsome” tower, points out a possible source for these powerful reactions in an eloquent essay about the WTC site for the New Yorker magazine (which plans to move its offices there next year):

“The site contains more contradictions, unresolved and perhaps unresolvable, than any other eight acres in Manhattan. A celebration of liberty tightly policed; a cemetery that cowers in the shadow of commerce; an insistence that we are here to remember and an ambition to let us tell you what to recall; the boast that we have completely started over and the promise that we will never forget—visitors experience these things with a free-floating sense of unease.”

The Israeli-born fine art photographer moved to New York in the aftermath of the attacks, gained access to the reconstruction site and photographed there from 2001 – 2013, “mechanically and intuitively,” he tells American Photo. “It’s only after in the studio, while organizing and building my images, that I sit back to analyze.”

For a series of large format prints, currently on view at Julie Saul Gallery and three other venues in New York, he layered and collaged hundreds of these photographs made on a camera with an 80MP digital back. “For each piece, I was mostly guided—much like a painter—by the composition, the colors, the axes of symmetry and asymmetry,” he says.

The final images embody fragmented references to what New Yorkers have seen protruding from the skyline this past decade. At the same time, they continually push away from the recognizable and approach pure line and color—an abstract canvas onto which viewers can project the ineffable emotions and internal conflicts the structure invokes.

“Photographing amongst so much concrete was a really strong experience… overwhelming, ‘heavy,’ and oppressive—not only because the history of the place, the obvious symbolism of the site, but also literally because of all these stones and cement around,” Kremer says. “In contrast to this, playing with the images in the studio brought me to much more lightness and freedom. The juxtapositions of the two words [in the series title] was a perfect translation of the way I felt in the place, and about the place. “

Shai Kremer is a fine art photographer based in New York and Israel. “World Trade Center: Concrete Abstract” is on view at Julie Saul Gallery in New York from Sept. 4 – Oct. 25, 2014. In conjunction, images from the series are being exhibited at The Museum of the City of New York, The Brooklyn Academy of Music, and The Bronx Museum of the Arts.