The Larry Fink You Haven’t Met Before 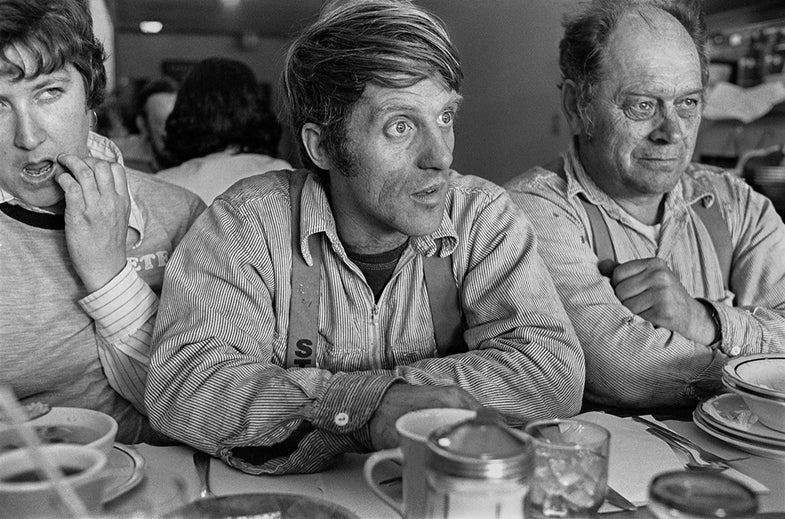 Brash, direct, in the middle of the action. That’s how you’d describe the work of Larry Fink from his high-contrast, flash-fueled party photographs, his candid glimpses backstage at fashion shows, or his first book, Social Graces (Aperture, 1984), a study in the contrasting social rituals of upper-crust New Yorkers and rural Pennsylvanians in the 1970s.

But Fink, who teaches photography at Bard College, unveiled another dimension to his work with the publication earlier this year of Opening the Sky. This cloth-bound hardcover was published by Stanley/Barker last summer, but the photographs date to 1980, when he was offered a grant by the Seattle Art Museum to explore any subject that struck his fancy, as long as it was in Washington State.

As Fink writes in a Beat-inflected essay in the book, “The logger in me allowed a natural transition to photograph the rugged breed of men who selectively pillaged the deep, virgin forest.” Off he went to the Olympic Peninsula for three months to chronicle the life and work of a “gypo” (freelance) logger named David McCardle and an “old guy” named Olaf, “who had an addiction to cameras who needed a poetic eye.”

After the trip, Fink filed his film away for decades. Now that this astonishing body of work has finally been published, we were eager to speak with him about it. Here is a lightly edited transcript of his conversation with American Photo‘s editor-in-chief Miriam Leuchter about this dispatch from what he called “the bellicose hills of the logging community.”

When I first looked at this book, I said, “Holy moly! This is Larry Fink?” I don’t think of you in a rural area, even though you live on a farm and your real life is a much more rural experience than your work implies. Or the work for which we know you implies.

Well, you know, Social Graces, it was the first big banger, and half of that book is rural. It doesn’t appear to be rural in the sense of any kind of pastoral. Basically they’re inside houses and at parties. So even though class-wise and emotionally they’re very different from the black-tie folks, there’s no observation of what’s happening in nature. But it was photographed out in the country.

So how did you arrive at this?

I’d had a show of the Social Graces stuff at the Museum of Modern Art in 1978. When the call came from the Seattle Art Museum to go out and photograph anything I wanted to I was somewhat paralyzed by my success. Everybody was talking and blah blah blahing and asking “Do you want to repeat yourself?” For somebody who was essentially thinking about the revolution and underground behavior, all of a sudden to be on top of the mob, without necessarily being ambitious to do that—it was surprise that John Sarkowski gave me the show. In fact, before that I had felt, in my political naïveté, that I wouldn’t take a show at any museum like that because it was, you know, the establishment. And then when I got it, of course, I was overjoyed. [laughs]

Amazing how that happens.

Yeah. And it went on for quite a while. I used to lurk around the halls of the show, and I found out that the museum was the best place—fuck the idea of the Establishment! People came in there, and you really got whatever your ideas or your visions were disseminated to a vast group of the population, and that’s what you intended to do. So [the logging project] was right in the midst of all that kind of very confused thinking from a left-wing, on-the-ground character…it was a great escape.

Oh, it was unbelievable! The people at the arts council in Seattle set me up with this guy Davey McCardle, who was a gypo logger—a freelance logger. He was a small, wiry, very smart guy. He and I lived together for three months out there on the trails and on the roads. We took another guy, Olaf, who was kind of an amateur photographer, and we piled into this old Bronco and off we went. It was fabulous. I was married then to Joan Snyder, the great painter, and after the first month she was getting pissed at me for not being around. [Laughs]

I would think it was an opportunity for her to get a lot done.

I would think so too, and she was pretty independent that way—she was certainly no wilting flower of a woman—but nevertheless she had some conventional ideas about what a husband should do and it gave us no end of resource for irritation, for sure.

Afterward, how did this work come to not be seen for all this time? You said, “Well, I did that,” and put it away?

Yeah, that’s it. I was always like that. I have a lot of bodies of work that are just coming out now because I’m bringing them out. I always just did it or whatever —I wasn’t of the mind like [Ralph] Gibson or Danny Lyon or all those guys who were whelping up against the establishment by self-publishing books. I didn’t feel the singular urgency to get my work out there. Partially it was political because I felt that important things, if they were important at all, would take their import over a longer period of time. It wasn’t about Larry getting his work out there—my philosophical position was that I was part of a bigger thing, which was the human struggle. And I could just let things go by and set them down.

Now, I developed that work of mine, all the party stuff and like that, and people had gotten me so into that party box that nobody knew anything of my work at all except the party box, which is unbelievably good work, but it was getting me sick. So I said, “OK, let’s get clear.” And we put out The Beats [in 2014] and now this logger thing, and there will probably some be more things about New York in the ’60s which people haven’t seen, and all kinds of stuff that’s still in the file.

My natural next question was going to be “Why now? What changed for you?” But it seems like you’ve already answered that.

Well, I wanted to share it because some of the work is so beautiful. And it’s also history, it’s about a time that’s gone by. Especially this logging community—I mean, gosh, the woods are imperiled now by fire, the economy has changed quite some for the timber industry, all kinds of yelling and noise about clear-cutting and stuff, and rightly so. But I wasn’t concerned about that, I was just concerned with the nobility and the struggle of these guys.

It sounds like it was very much a political statement for you—the way in which you photographed these men and your engagement with them and their work. Yeah. I could have gone off and photographed, not like Robert Adams but like clear-cutting and all kinds of ecological concerns, but I don’t generally get into polemics. I just pretty much see what’s in front of me and honor it, or try to pick it apart. But with these logging guys it’s about honoring them. These guys are America. This is history.