The first plane’s impact into the north tower of the World Trade Center raised all the city’s alarms. But as... 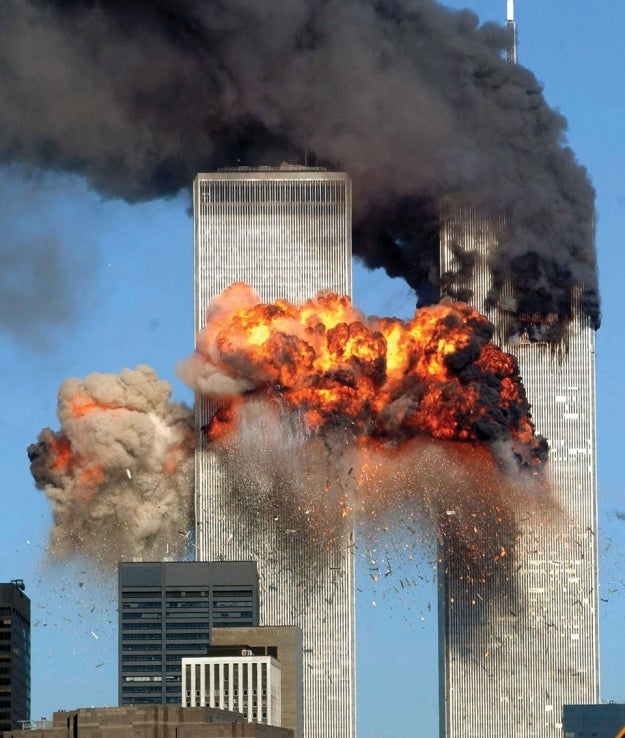 The first plane’s impact into the north tower of the World Trade Center raised all the city’s alarms. But as emergency workers and news reporters rushed to the scene, a second plane ripped into the south tower. New York City was under attack.

Allen Tannenbaum: First of all, you have to overcome your sense of disbelief that this is happening right here in front of you in New York City. Plus you have to keep yourself safe. And then, in what is really a chaotic and dangerous situation, you have to remember all your camera techniques. I was looking to shoot what I saw, one thing after another. As I moved towards the towers I heard the sound of another plane, a roar of engines, and there was a huge explosion, and the fireball. I was on the north side, just three blocks away, and this huge fireball came out the north side from the impact of the second plane. That was a moment I thought, “This might be my last picture.” But after I took a few frames of that explosion I ducked behind a building and debris rained into the street.

Spencer Platt: I went over the Brooklyn bridge on foot. All these cars had stopped. The taxi drivers were out, the passengers were out, everyone was just staring across the river. I didn’t hear the second plane and I certainly didn’t see it. I had put my camera up to take some more frames, and then it just hit. I got the whole fireball. I probably have like ten frames of that fireball, but it felt like it went on for minutes. I pulled my camera down immediately and scrolled to make sure I had the picture.

This taxi driver was looking over my shoulder and started screaming, “He’s got it.” As if that mattered. As if what happened in front of us wasn’t real until it was actually captured.

Then suddenly, I was overwhelmed with thirst. I was just shocked at everything, and my throat went dry. I remember this taxi driver gave me a couple bucks to get water. From there I ran over the Brooklyn Bridge.

David Handschuh: When only one plane had hit the World Trade Center, I was going to the site of an airplane crash and this horrible fire burning sixty, seventy floors up. There was no doubt in my mind that the firefighters, paramedics and police officers would put out the fire, rescue people, and everything would be okay. I was standing in front of the south tower when it got hit by the second plane and realized that what happened was very intentional, not accidental.

Todd Maisel: I saw the second plane hit when I passed Canal Street. Saw it right through my windshield. Then it was coming over the police radio and the fire radio that we’re under attack.

Very few people actually realized that the first plane that hit the Trade Center was an airliner. When the second plane hit the whole complexion of the job changed. It was very scary. Throughout the day whenever we heard things above us I thought we were going to get hit again.

Mario Tama: Outside the Millennium Hilton hotel, right at the east edge of Ground Zero I saw my first real victim. This guy had blood coming out of both of his ears and glass in his hair. He was kind of down on the ground and in shock. That was when I first started to connect with what had happened. Before then it was just this big building in flames. I didn’t process it until I saw that guy. The police started to block us off at that point. Of course, the photographers were trying to get into the building.

Spencer Platt: There wasn’t a lot of foot traffic on the Brooklyn Bridge going toward Manhattan. People were headed into Brooklyn. It wasn’t until I got near the base of the bridge that I saw the first people that had been injured. People were in shock and crying.

I vividly remember getting off the bridge and seeing a man and a woman. The woman was hysterically crying. I instinctively took a couple pictures of her and I was just totally confused at what was going on. I remember him telling me, “Don’t shoot this. You can’t shoot this.” I don’t even think I tried to argue.

Around that time I bumped into Mario Tama, another Getty photographer. By that time, there were tons of photographers and media. Tama and I were trying to get into the towers. It never even entered our imagination that these things were going to collapse.

Mario Tama: Spencer and I talked for a minute. Then I went with this other photographer who said he knew a way around the barricades to get back up to the towers. We went around Trinity Church [directly southeast of the Trade Center]. By then the smoke was really thick and black, whereas in the first photos that I took it was just white and hazy. That’s not something I think I processed. But if you look at it now, you can tell it’s getting a lot more intense.

Allen Tannenbaum: I went around to Church Street to the east side of the plaza. When I got around there I could see that both towers were burning. People were streaming out of the building in terror. I tried to get closer, but the FBI was keeping people away from the plaza. It was very dangerous, because things were falling, people were falling. You didn’t want to be there really. I had photographed a lot of injured people, burned people, and people trying to get out of the buildings, until a cop said, “You should move back. It’s dangerous.”

I went back five years ago and I re-edited all my images and I found a chrome that I hadn’t seen before. In that frame, you can see many people in the windows above the entry site, desperate for help. One guy is even clinging, way up on top, to the outside of the building. I guess they thought maybe a helicopter would come rescue them. Nothing ever did, and they were doomed. I look at that picture and it gives me chills to think that these people were desperately looking for help and it never came.

Mario Tama: There was a really intense attitude coming from the police. As you got right on to the site they became really intense, kind of getting people back and keeping people away. They saved a lot of photographers’ lives that day. Most photojournalists are just trying to get as close as possible. I don’t even know what we were thinking that we wanted to do. But that’s our mantra: “You’re not close enough.”

David Handschuh: There was no indication that the buildings were going to fall. However, there was a ton of debris coming down, so I was always looking up, making sure that it wasn’t parts of the building crumbling or a person jumping. So you’re actually keeping an eye to the sky as to what was coming down, and keeping your eye over your shoulder and in front of you, trying to look for the best picture.

Todd Maisel: People that were further away were focused on the building itself, but because I was so close, the things on the ground were a big focus for me. Debris, injured people, people crying and screaming.

There were bodies hitting the ground, but we didn’t realize it until Danny Suhr of Engine 216 got killed by one. The body exploded when it hit him. It was absolutely shocking. Did I shoot it? I shot him being dragged by his fellow firefighters. That I shot. You see something like that, your reflexes kind of get out of whack. I shoot firefighters and cops, that’s what I’ve done for almost my entire career. But when I saw that it was one of the first times I took some pictures and then just started crying.

Gulnara Samoilova: I saw a lot of people jumping but I couldn’t take pictures of that. I just couldn’t lift my camera. I couldn’t believe my eyes that people had the strength to jump and die this way. And to me it was the most powerful moment because exactly a year before that I went on top of the World Trade Center for the first and only time, and I remember what I felt looking down, how scary it was and how high it was. Seeing these people, I was picturing them looking down, like looking down through their eyes. That’s the only time that I didn’t take photos. When I was walking back home, I took a photo from afar, with a lot of smoke. You can see there are two people jumping from the building, their silhouettes against it. But I didn’t know until I saw it on my print.

This is part two of American Photo’s expanded four-part oral history of September 11, 2001, by the photographers who documented it. Click here for part one, part three, and part four. A condensed version appeared in the September/October 2011 issue of American Photo magazine.

This story is also available as a free download for the iPad, with even more photos, photographer interviews and portfolios.

We hope you will take this opportunity to donate to one of several charities benefiting those affected by the September 11 attacks.