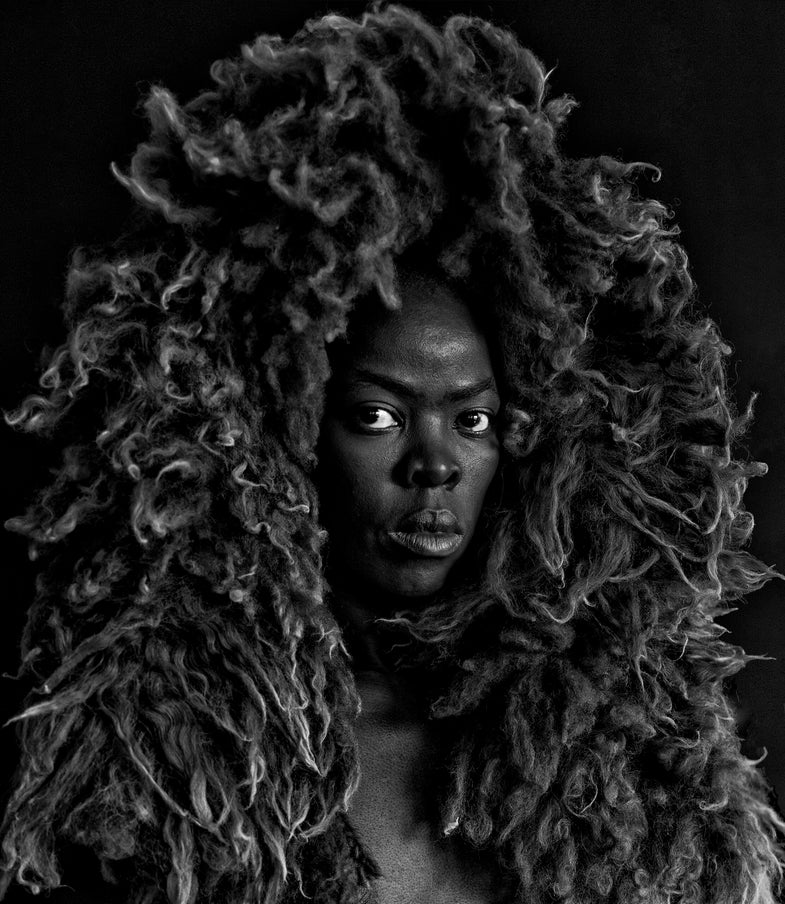 What is the role of documentary photography in the quickly shifting political climate and morphing process of self-identification through artistic practice? Kevin Moore, Curator and Artistic Director of the third FotoFocus Biennial in Cincinnati, Ohio, suggests a new term for the shows he’s curated this year—including Roe Ethridge, Zanele Muholi, and Jackie Nickerson—and the 60 additional exhibitions throughout the city: The Undocument.

This theme calls into question documentary photography’s “claims to objectivity” and further, “observes its tendency toward subtle or explicit fantasy,” according to Moore. He is interested in the ways photography “distorts and reshapes the world it records,” as well as alternatives to this specific photographic genre.

From the powerful LGBTI portraiture of South African artist and activist, Muholi, to the narrative-disrupting exhibition of Ethridge to the recontextualizing of the found image by Larry Sultan and Mike Mandel, this year’s FotoFocus shows that Cincinnati is at the forefront of contemporary socio-political conversations about photography and its changing role in culture.

Here are some universal truths about image-making that we were reminded of while visiting the numerous lectures and exhibits during FotoFocus:

There is more to an image than what meets the eye.

This is an obvious concept for lovers of the photographic medium. Roxana Marcoci, Senior Curator in the Department of Photography at the Museum of Modern Art, however, kicked off FotoFocus with a keynote address about artist Louise Lawler, whose work sets the tone for what this year’s FotoFocus theme, Photography: The Undocument, is all about. It’s the idea that documentary photography can, and often is, used as a vehicle to generate meaning that conceptually reaches far beyond the superficially inferred subject(s) of the image itself.

Lawler, whose work will be on view at MoMA in Spring 2017 in an exhibition titled, Why Pictures Now, uses imagery to speak about the spectacle of the photograph and invites the viewer to adjust their expectations to what they are seeing, according to Marcoci. Her work is an example of how far an artist can push the limits of appropriation, representation of self and others, and meta-analysis of the institution of art in conceptual image-making.

Photography can be a tool for activism and a means to freedom.

Zanele Muholi‘s work, which she terms “visual activism,” arose out of a desire to “rewrite South African visual history.” Though South Africa was the fifth nation in the world to legalize gay marriage during the rebuilding of the constitution after Apartheid, there isn’t any legislation punishing hate crimes. The first photo Muholi took was of her friend, who died after contracting AIDS as a consequence of a “curative rape” to rid her of her homosexuality. This abuse, and violence in general, is still being perpetrated against the LGBTI community in South Africa. “I’ve had enough of silence and invisibility of my people and so I took a stand to document the lesbian and transgendered community in South Africa,” she says.

Muholi’s exhibition, Personae, on view at the National Underground Railroad Freedom Center, is comprised of two bodies of work. In Faces and Phases her subjects are female-identifying Black South African lesbians. For the portraits, shot primarily in black-and-white film, she asks her subjects to look at her directly in the eye, effectively breaking down the hierarchy of photographer and subject. “I’m trying to break those stereotypes of how we are seen,” she says. The series began ten years ago as a way for Muholi to personally heal and to document her community, giving them power in numbers for protection against violence and misrepresentation.

In the case of Zanele Muholi, Undocument references the idea that “identity isn’t stable,” according to Moore. In addition to the gender ambiguity that the subjects of her photographs present, she also explores her own multiple identities through self-portraits in the series, Somnyama Ngonyama. Meaning “Hail the Dark Lioness” in Zulu, she confronts racism by photographing herself while on the road, highlighting various aspects of her identity which speak to her skin color, ethnicity and the cultural perceptions and stereotypes of femininity and African culture. “We are the custodians of our own freedom,” she says.

“I don’t see many black people at galleries and museums. It’s a problem. I don’t see many projects that look at self-representation, especially in the case of LGBTI people,” she says. “The only way in which we can undo the silence and undo invisibility is to project ourselves in mainstream spaces, like this one, and to educate communities about who we are and where we came from. Unity is key; you can’t be your own island. Collaboration is key.”

In his first solo museum exhibit, Nearest Neighbor, on view at the Contemporary Arts Center, Roe Ethridge follows the trajectory of shifting identities through a different thread: The fluidity between the public and the personal spheres he inhabits as well as the intersections of commercial and fine art photographer.

In his working process, he emphasizes his intention to obstruct the notion of the photographer as a solitary artist, and instead highlights the collaborative process of a working commercial photographer. He works closely with a team including a set designer and a model/assistant.

And the expectation of the viewer, like in Lawler’s work, is also upended. He attempts to give the vie wer ways to associate his disparate works—straight photographs, composited works, or works where accidents, like a faulty printer head, inspire him to shift the color of an image, and sculptures, that when collapsed in a still photograph, emulate the look of his images—and visually rectify what Moore says is a “puzzle not meant to be put together.” His commercial and personal work, which are charged with an equally absurd tone, making them appear slightly askew, arose out of his desire to fit together the disparate experiences of daily life: familial scenes, kitsch and popular cultural, the stock photograph and public and private self and spaces. Ethridge is interested in losing the context of the picture to see the image for what it really is. It’s “obvious irony” he says.

Of his unique style, he says, “I thought Lee Freidlander and Andy Warhol were both really great and they typically don’t get conflated. As I get older I can see those two strains coming together. The droll quality and everyman quality (even though they aren’t ‘every man’) starts to make sense to me.”

The exhibition chronicles the last 15 years of his work. More than anything, Ethridge says his images represent what it’s like to be “a photographer living and working in New York City in 2016.”

Jackie Nickerson: August, also on view at the National Underground Railroad Freedom Center, is an exhibit that documents agricultural laborers in southern Africa through two series,Farm and Terrain. It’s important for Nickerson, who was born in Boston and is based between Ireland and Africa, to spend long periods of time immersed within the communities she photographs, be it one month or six years, as was her experience in Zimbabwe.

Of the 100 people Nickerson photographed in her series, Farm, only one is still alive, she says. The people she photographed succumbed to a combination of a typhoid epidemic, hunger, AIDS and political violence. “We have to be open and vulnerable at the same time,” she said of her work, during a conversation with Susan Meiselas and Time’s Deputy Director of Photography and Visual Enterprise, Paul Moakley.

Nickerson has a layered approach to photography, in that she’s interested in the non-literal interpretation of the image and the emotional subtext in any given scene. “It’s important to me to add a certain aesthetic to transform an image to make it look like what it actually looked like there,” she says. “And to pare down my images to be true to the moment.” In the fields, the color tones are soft and so is the light, so she responds to this in her editing.

“I think a lot of people think I stage things, but I never direct people on the farms.” Instead she interprets the landscape, clothing and tools as a language for telling the stories of the people, who appear strong and distinguished in her portraits.

In 2014, Nickerson went on assignment in Liberia to photograph Time’s Person of the Year: The Ebola Fighters.”Once you put work out there you can’t control how people look at your work, so you have to be true to yourself and do the work that’s right for you.”

Photography can be used to sway the populace.

You may already be familiar with the seminal work of Mike Mandel and Larry Sultan, Evidence, which was originally presented at the San Francisco Museum of Modern Art in 1977. If you aren’t, the presentation of the series at the Art Academy of Cincinnati is a potent reminder of how images, in this case taken from private and public American institutional archives, can augment reality when taken out of the original intended context. The found photographs were taken from crime records, industrial tests, and engineering experiments to show how photographs can be repositioned to tell a new narrative as art.

In conjunction with this series, Lockdown Archive and Shelter in Plates, Mike Mandel and Chantal Zakari assemble images culled from the web to try to make sense of the military siege in Watertown, Massachusetts during the hunt for the Boston Marathon Bomber.

Some of the most brilliant photography of the South came out of The Lexington Camera Club. 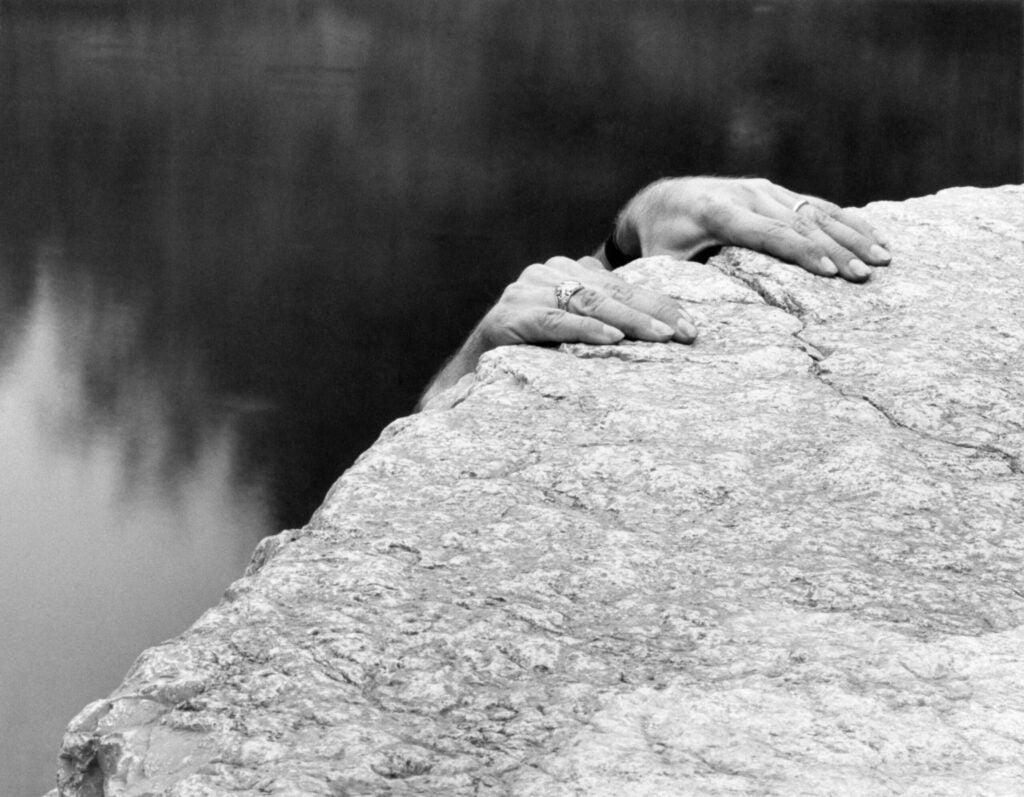 This may not be a universal truth, but we were curious to discover the often overlooked artistic company Ralph Eugene Meatyard kept in the Kentucky Renaissance: The Lexington Camera Club and Its Community, 1954–1974 exhibit on view at the Cincinnati Art Museum. Perhaps the notion of The Undocument here comes in the form of the risks the members of the Lexington Camera Club took with analogue experimentation and their ability to create compositional tension in quotidian domestic scenes and landscapes. The exhibit features lesser-known work by Meatyard—not just his macabre, blurred images of children in lonely landscapes—and a host of his lesser-known contemporaries such as Guy Mendes, Charles Traub, Cranston Ritchie, Robert C. May and poets Ronald Johnson and Jonathan Williams (who are associated with Black Mountain College). Perhaps the most under-appreciated work comes from Ritchie, who like Meatyard, makes arresting images that highlight his understanding of dynamic composition and the underlying darkness of the bucolic American landscape. Shown only in black-and-white, the images paint a picture of the rich photographic community practicing together at the Lexington Camera Club between 1954 and 1974.

FotoFocus Biennial 2016, Photography, the Undocument, is on view through the month of October, with exhibitions and events at more than 100 participating venues in Cincinnati and surrounding areas.