For one month starting mid-October, No Ad, a new augmented reality app which has been generating a lot of discussion... 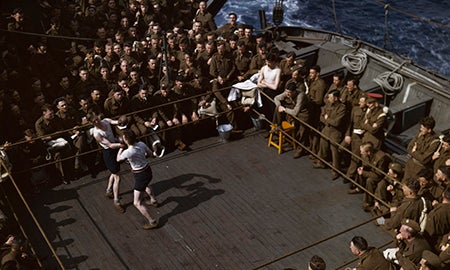 For one month starting mid-October, No Ad, a new augmented reality app which has been generating a lot of discussion around the Internet, will be swapping mainstream advertisements posted throughout the New York City subway system with photographs from the International Center of Photography.

The free app, brainchild of activist Jordan Seiler and Subway Art blog creator Jowy Romano, uses the camera of any iOS or Android mobile device to detect advertisements in subways. In real time it then overlays them with hand-selected artwork to create a massive virtual exhibition space underground, as demonstrated in the video below. The ICP curated month currently in development will include a focus on the work of Sebastião Salgado, whose exhibition “Genesis,” is now on view at their Midtown Manhattan museum, among other photos from their collection.

Practically speaking, the app is not a perfect ad blocker because it requires users to actively filter what they’re already seeing through the screens of their phones. But, as Seiler says, “It’s more of a proof of concept, for once we’re wearing Google Glass or other kinds of virtual reality displays.”

Early reviews of the app are quick to point out that it will not function on advertisements that have already been altered, defaced, or some might say enhanced by other artists unsanctioned by the MTA.

In attempting to hijack advertisements in public spaces towards a noncommercial end, the No Ad app itself draws lineage to the ‘70s and ‘80s subway graffiti movement when artists such as Keith Haring and COST, sought to take control over and diversify the imagery with which upwards of 5 million commuters were bombarded on a daily basis.

“If an ad has [been] altered past a certain point, or has enough graffiti on it, NO AD will not work,” Romano told ANIMAL New York in an interview. “As far as we are concerned this is a feature, not a glitch.”