A Hidden New York City Jazz Scene, Through the Eyes of a Master

In 1998, Sam Stephenson made a discovery in the vaults of an Arizona photo archive which would change the course... 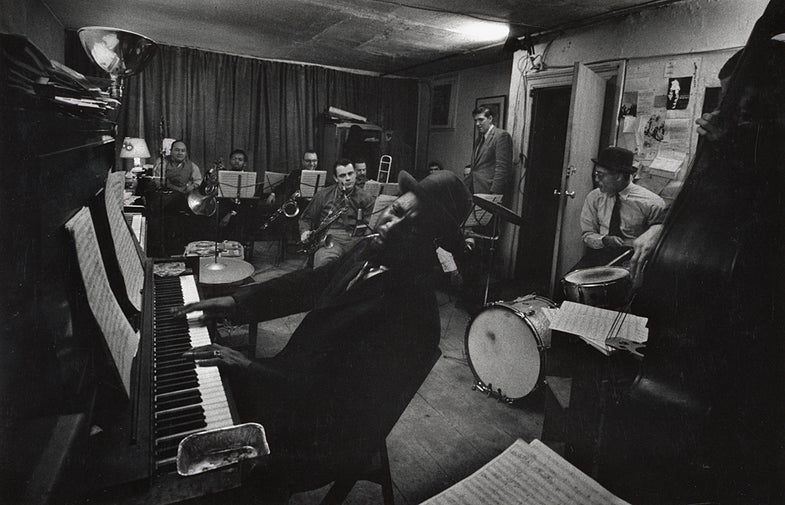 In 1998, Sam Stephenson made a discovery in the vaults of an Arizona photo archive which would change the course of his life. What Stephenson found wasn’t a collection of photographs, but audio tapes: 4,500 hours’ worth of jazz sessions recorded in a dingy New York City apartment between 1957 and 1965, featuring Thelonius Monk and other prominent musicians of the era. What’s surprising is that they were recorded by one of the most legendary photographers of the era, W. Eugene Smith.

Over the course of his career, Smith was a member of the Magnum photo agency, and through his extensive work for LIFE Magazine, practically invented what we know today as the “photo essay.” Of course, Smith wasn’t just recording audio in what became known as the “Jazz Loft,” but shooting film as well—somewhere around 40,000 pictures in total. Although he had come to study Smith’s “Pittsburgh” project, Stephenson unwittingly unearthed what is perhaps the largest and most important project of Smith’s already-legendary career—a project no one had seen in its entirety before that moment in Arizona.

“They were all there in these cardboard boxes,” he said. “Thank God they saved them. Their work is photo work, so there just wasn’t any interest or resources to do anything with the tapes. I was a jazz fan, so I was tantalized by the existence of those tapes, and wondered what they sounded like.” Stephenson’s involvement has led to the publication of a book, “The Jazz Loft Project,” as well as an exhibition which has been traveling around the country since its New York City debut in 2010.

W. Eugene Smith was born in 1918 and grew up in Wichita, where his first 18 years were defined by photography from the start. “When he was a teenager, he took his mother’s station wagon and painted on the side of it, ‘W. Eugene Smith, photographer,’” says Stephenson. “From a very early age, he had a certain audacity about himself and his work, and I think it comes from the era he grew up in: it was before television, magazines had just started, and photographers were heroes.” 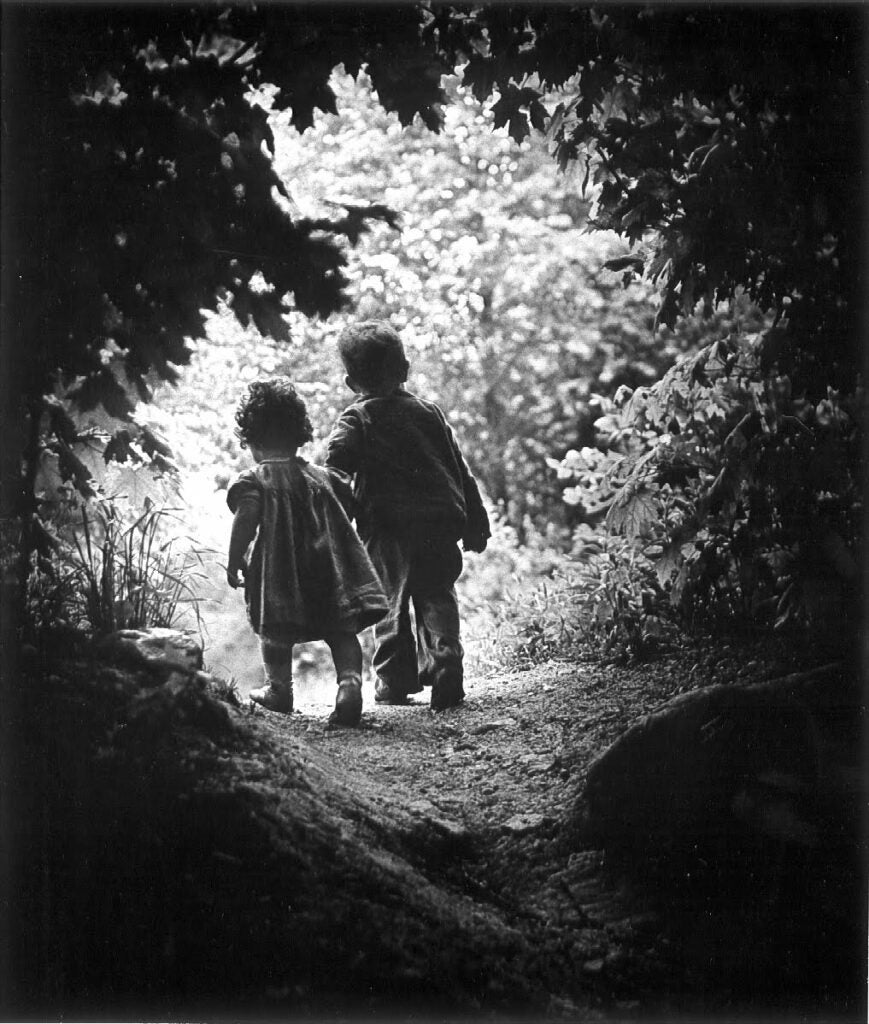 “The Walk to Paradise Garden”

It’s natural that Smith eventually became a war photographer, shooting in the Pacific during World War II. A close call in Okinawa left him needing a period of recuperation at home with his family, and the first photo he took after his recovery, an idyllic shot of his children, has become one of his iconic photographs. However, his relationship with his family was tumultuous: Smith could be an exceptionally difficult person to deal with, especially to those who depended on him.

Editors were treated in a similarly brusque fashion. During his time at LIFE magazine, Smith produced some of the groundbreaking work that defined the golden age of magazine photography—his series “Country Doctor” and “Nurse Midwife” are particularly noteworthy. Although his editors had granted him unprecedented freedom, he remained dissatisfied with the way his work was presented, and he eventually quit the magazine—an almost unthinkable move at the time, given LIFE’s position at the top of the photojournalism pantheon. “I think the truth is he couldn’t satisfy himself,” says Stephenson. “So a lot of times his editors were scapegoats. LIFE magazine gave him more freedom than anybody else—he was just bound to bump into problems.”

Smith’s complex personality makes it hard to think of him as just a photographer, and when I start to suggest this to Stephenson, he jumps in: “Man, he would love to hear you say that. He always said that he was more influenced by music and theater than he was photography.” Music was, in fact, about to become a much more important part of his life.

In 1957, Smith left his wife and two children in Croton-on-Hudson and moved into a New York City loft apartment which, for three years prior to his arrival, served as a vibrant, fluid scene: jazz musicians, artists, even curioys people from off the street were all moving in and out of this loft on a daily basis. Smith moved in to take the place of a longtime friend, Harold Feinstein, who was moving out of the apartment with his pregnant wife Dorrie. The move to what became known as the “Jazz Loft” might have been a way to escape some of his problems, whether at home or at work.

Stephenson says another of the apartment’s residents Hall Overton was “the musical magnet for the loft,” but Smith immediately developed a level of natural trust with the musicians who were there, allowing him to record and photograph their sessions with ease. And the musicians were always being taped: Smith had the building wired from floor to ceiling with recording equipment, even recording personal conversations and TV programs of the time. In other words, using technology that we might now find rudimentary, he created an advanced surveillance system designed to capture a body of artistic work as it moved in and out of the Jazz Loft. 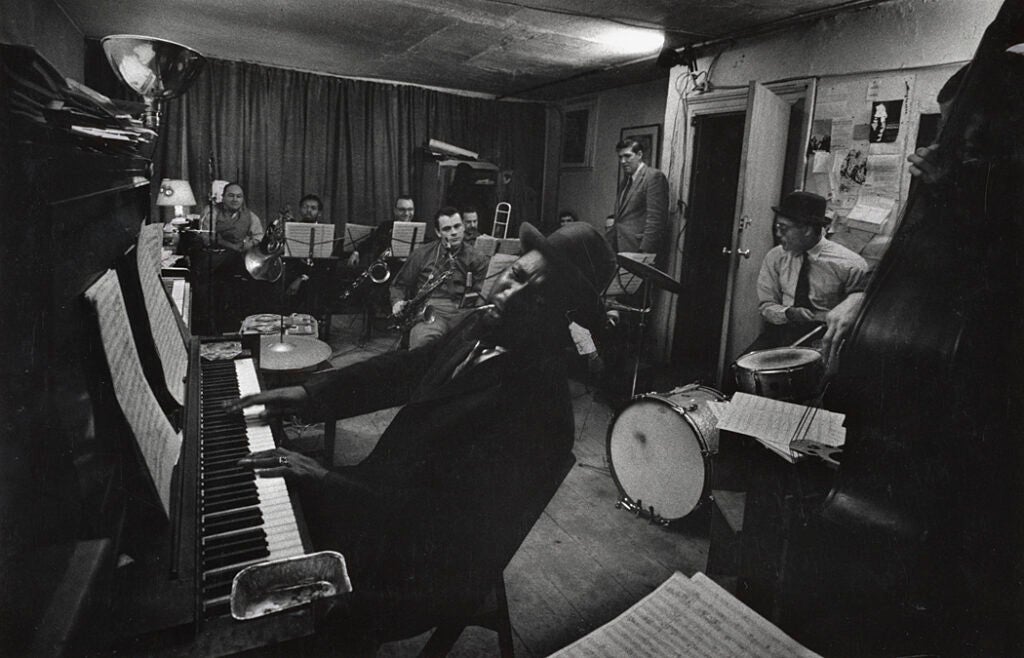 Thelonious Monk and his Town Hall band in rehearsal, February 1959

Needless to say, Smith was also taking plenty of photos, though not being too disruptive about it—his nickname at the Jazz Loft was “Lamont Cranston,” the main character of a serial radio and TV program at the time whose alter ego was “The Shadow.” In an interview with WNYC, pianist Paul Bley recalled that Smith “had a remarkable six-shooter style. You’d be standing in the hall with him, and while he was chatting you up, the camera was at his kneecap level, and he was ‘snap,’ ‘snap,’ ‘snap.'” This style allowed him to capture the energy of these musicians, playing for no one else but themselves—”there’s a certain purity that I think Smith really admired,” said Stephenson.

Broadly speaking, Smith took two kinds of photographs at the loft: documents of the music scene inside, and meditative shots of the outside world. Among Stephenson’s favorite photographs of this former type are the portraits of Thelonius Monk, which include some of the only pictures “in the history of Thelonius Monk photography” in which he’s not wearing a hat. Another standout is of saxophone player Zoot Sims. It’s not just Sims’ intense playing that interests Stephenson, but the woman behind him: “I have spent many years trying to figure out who she is, and I haven’t been successful. I’ve shown that picture to all the musicians surviving today who were in the loft around that time period, and who might have even been there that same night, and nobody remembers her.” 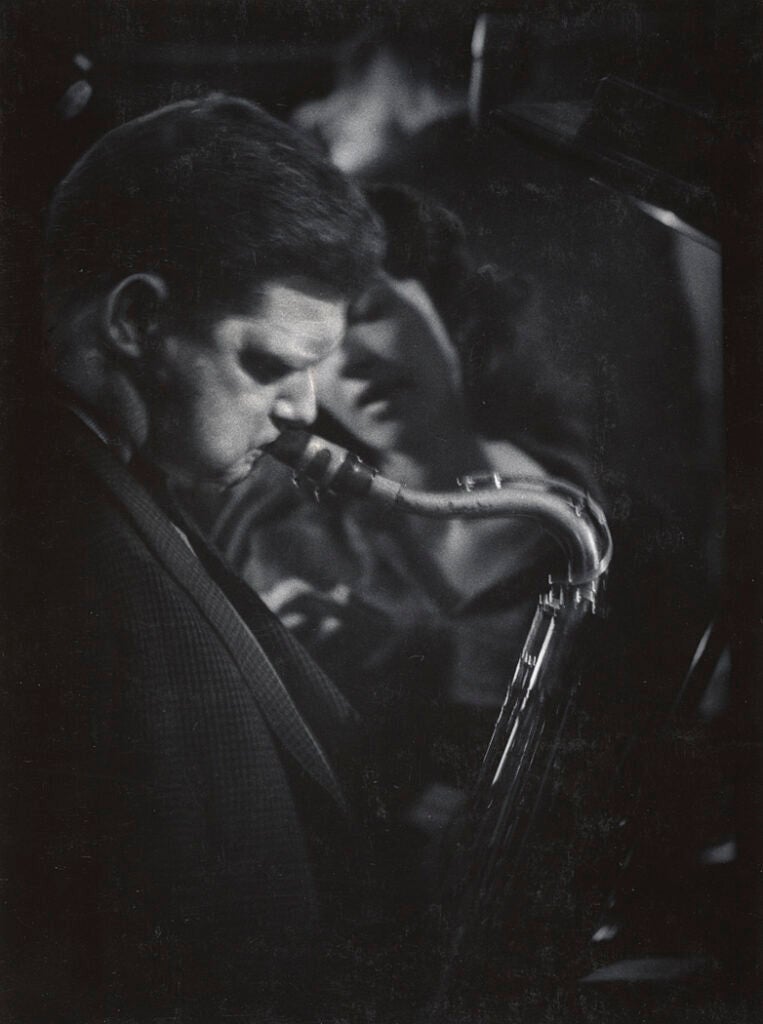 Something about this woman, who seems to be lost in a moment of musical reverie, sums up the mysterious nature this project as a whole. On the one hand, if it weren’t for Smith’s obsessive eye, the Jazz Loft might have become another of New York’s tall tales. Still, like the identity of this woman, there are some things about the loft which we may never know.

The other group of photographs, taken out the window of the Jazz Loft, provides what Stephenson calls “a daytime break from the nocturnal fevers.” At the time, 6th Ave. and 23rd St. in New York City was mostly a commercial area. This was a boon to the music scene at the Jazz Loft; even in summer, when the windows were open and “you could hear the music from a couple of blocks away,” there was no one around to complain. Most of the people on the street were in the area for a reason, knew where they were going, and displayed a strong sense of purpose quite in contrast to the chaotic activity going on upstairs.

“Smith often said that there was a play unfolding every day down below that window,” says Stephenson. One of these photographs is on the cover of the book, and Stephenson suggests that this image of a man crossing a busy street reflects Smith’s own struggles: “he identifies with this handicapped man trying to get out of the way of the onrushing society.” That’s certainly a dramatic reading of the image, but it also seems fair to say that the romantic Smith would see it in the same way. After all, this is the same photographer who would later be physically attacked in Japan over his commitment to documenting and publicizing the effects of Minamata disease, a type of mercury poisoning which was directly caused by corporate negligence. 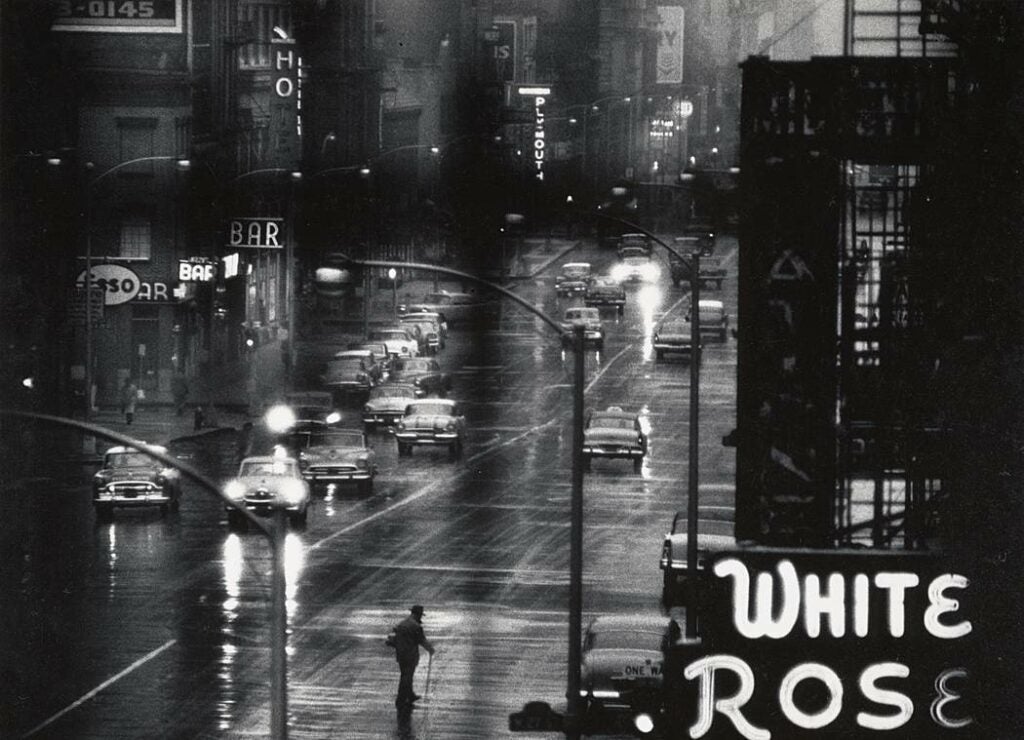 Stephenson points out that there is a connection between Smith’s motivations for taking photographs and his choice to never promote the Jazz Loft work, even when opportunities presented themselves. The work at the Jazz Loft “wasn’t a journalistic project, and he thought of himself as a journalist, so he never placed any sort of moral imperative on this work.” Indeed, there are only three or four images from the Jazz Loft in his 1969 Aperture monograph, and a similar number in a 1971 exhibition at the Jewish Museum, which featured almost 600 of his photographs. Despite being Smith’s largest project “by a very, very wide margin,” the work had simply remained out of public view.

In some sense, the photography world has passed Smith’s work by, although that may be changing. As Stephenson says, “his photographic style of wearing your heart on your sleeve hasn’t been in fashion in the last 30 or 40 years, whereas it was very much in fashion right after the war.” If it’s not about aesthetics, there are also the many bridges Smith has burnt over the years: “So many people who are in the photo world in NYC kind of sneer at him, or at the memory of him—but not the photographers, it’s more of the arbiters.” In 2010, though, New York City photography collector Loring Knoblauch used his influential blog to rate the “Jazz Loft Project” exhibit at the New York Public Library for the Performing Arts as one of the 10 best of the year.

Even though Stephenson is writing Smith’s biography, he still sounds flummoxed by his subject. “I never signed up to do this. I never signed up to spend 15 years on Smith’s life and work. It just happened gradually. There are people that I would sign up to spend 15 years researching, but Smith is not one of them. He would not have been one of then 15 years ago, and I don’t know if he would be one of them now!” Assuming that Stephenson’s work does, eventually, come to an end, a posthumous vindication of Smith’s photography would be a fitting final chapter in one of photography’s most enigmatic lives.