Behind the Shot: The Marshall Plan 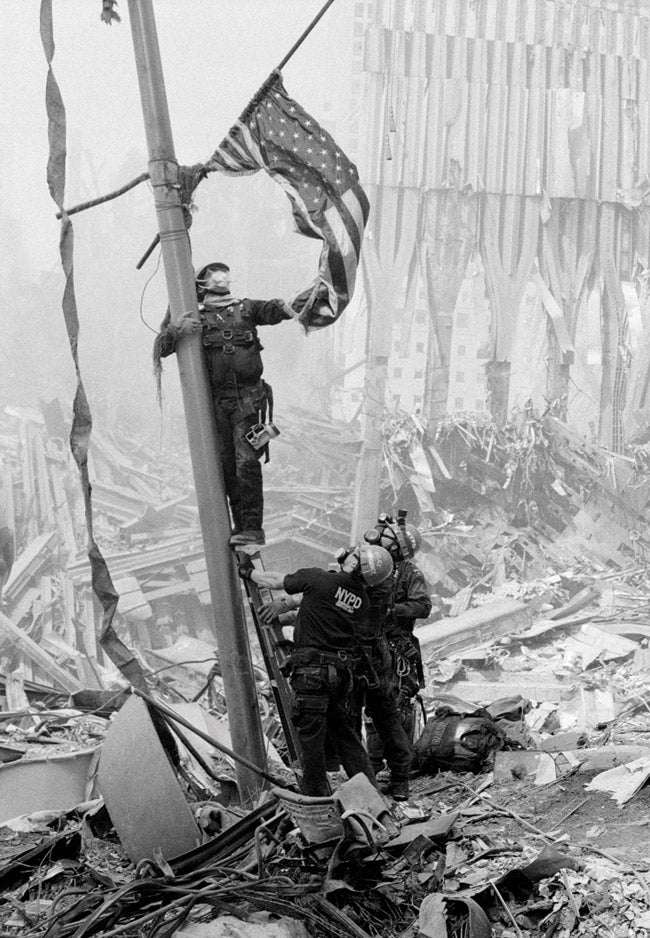 Police officers unfurl a flag hung from the antenna of one of the fallen World Trade Center towers. John Botte
SHARE

John Botte was trained by professional photographers from the age of 12. “I was a cleanup boy in a dark room. At 14 I was a film loader for a commercial photographer, loading 8×10 film. These old-timers taught me theory, how to understand tonality in a negative, how to previsualize. I still develop all my own film by hand.”

Despite his deep technical knowledge, Botte never aspired to work as a photographer. Instead he dreamed of becoming a New York City police officer. However he carried a Leica with him on the job every day. After the devastation of 9/11, while fulfilling his policework on the pile he would make photos as compositions occurred to him. Then, in early November he got an unexpected day off.

“My partner happened to be at the Javits Center. He radioed me that PhotoPlus was going on. I didn’t have anything planned, so I figured I’d go check it out. I wanted to go to the Leica booth to see if they were showing anything new. There were a few people mingling around, and this guy wearing a nametag that says ‘Jim Marshall, Leica Camera.’ I’m all flakked out, with my gun strapped around my leg, and he says, ‘Oh hey, you’re NYPD? What’s your name?’ I introduce myself and he says, ‘Do you know who I am?’ And I look at his nametag and say, ‘You’re Jim Marshall from Leica Camera.’ He starts laughing, then puts his arm around me and says, ‘I just met my new best friend.’ I didn’t understand what he was talking about, but a random guy took me aside and says, ‘He’s, like, the god of rock and roll photography.’ I said, ‘I don’t keep tabs on photographers. The only one I know is Ansel Adams.’

“Jim collected lapel pins. He used to wear sport jackets and put lapel pins on them. He asked me if I had a lapel pin with the NYPD logo. I keep a box in my car full of stuff like that to give out to kids. We walk out to my car and I hand him some pins. In the corner was a binder with the first set of prints I’d made from my shots after the attack. He grabbed it and said, ‘What’s this?’ I told him to put it down, but he opened it up. The front page was the picture with the police officer and the flag [see opposite]. He closed it up and said, ‘Let’s go.’ I told him to put the book back in the car. He gave me the finger. I threatened to cuff him, but he wouldn’t put the book down. He said, ‘When were you born?’ I said, ‘Sixty-six.’ He said, ‘Nope, you were born today,’ and takes off into the building. I chase him to the Leica booth and he walks in and shouts, ‘You want to know what photography’s about? Put your eyes on this.’ Just screams it out. Within an hour there were hundreds of people surrounding the booth. Then this guy from Leica wants to talk to me and he offers me a show in Germany for the first anniversary of 9/11. I said why not. Millions of people ended up seeing my work there. Everything happened because of Jim.

“He wanted a print of that picture immediately, before he left town. So I made him a print that night. When I make prints I always make a few. So I made one for him and a few more for the guys who were in the photo. Later, when I took the photo over to him, he calls David Gahr, another major music photographer. They were very close. Jim was the godfather to David’s son, and Jim would always go see David on his way to the airport when he’d leave town. Jim calls David and he says, ‘I got this picture of 9/11 that’s going to blow your mind.’ David says, ‘It’s not as good as the photo I have of 9/11.’ And they start arguing about it on the phone.

“When Jim gets to David’s place, they both slap down their pictures and it’s the identical shot. They freak out. Jim tells David his side of the story, and David replies, ‘You fail to realize that the officer on that ladder raising that flag is your godson.’ It was Seth Gahr. He’d given his dad the print. I knew Seth as an NYPD officer and never made the connection.”