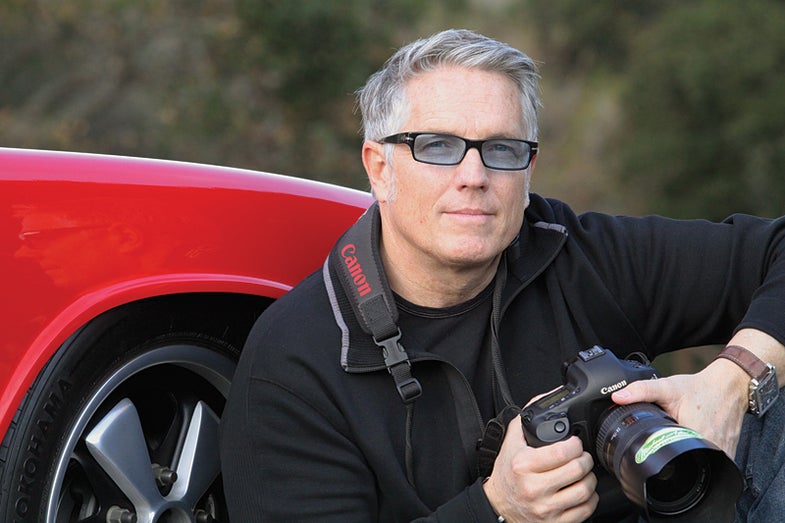 Based in Marin County, CA, photographer Michael Alan Ross lives out his boyhood dreams shooting hot rods and luxury cars all over the world. See more of his work at michaelalanross.com. Pete Stout
SHARE

Why shoot cars?
I’ve been into cars since I was a kid. It was like a game to me to find out everything about them, even down to the name of the paint color. I built models of cars all the time; I thought I’d grow up to be a car designer. But when I was nine, my dad gave me a camera and took me to a car show. I was hooked—car photography has been in and out of my life since then.

How did you make it your career?
I learned about photography by working as a model. I was surrounded by the top photographers from all over the world, and I paid attention to what they were doing. I always took a camera with me—it was like I was getting paid to do an apprenticeship. During that time I was also a precision driver in television commercials for clients like BMW and Mercedes Benz. About 15 years ago, all of these things led me to realize that it was time to combine my two passions: automobiles and photography.

How is your business split?
I shoot for Porsche of Germany and for several car magazines, including Automobile, Hot Rod, European Car, and AutoWeek. I’m used to flipping between a lot of different things, and my work load always changes. It’s about one-third editorial, one-third fine art, and one-third commercial. I’ve learned that I need to diversify, especially in today’s market—I need to be able to shoot beauty shots of cars along with action on a track and portraits of the people involved. I think the reason I get hired for any type of work is because of my fine art and the composition of the photos.

With so much of your business in luxury cars, has the eco-nomic recession affected your work?
The people who have money still have money. So it’s not so much the client work that’s been affected—it’s been more on the editorial side. There’s been a big change there, with smaller budgets and all of the online stuff that’s needed. People will do anything to shoot what I shoot; some will do it for free. It becomes a challenge to convince photo editors that you are worth the money when there are so many photographers who just want the experience and will undercut you. There’s a lot of photography that’s good enough, so it’s a matter of justifying my numbers and showing them why I’m different.

How does a typical shoot work?
I’m an outdoor location shooter; I don’t work in a studio. I always start with paper and pencil, and draw out my ideas. If I’m flying in to do a shoot, I get there two days early and scout several locations, so that when I meet the client I present them photos of about four locations within a few miles. Once at the location, it’s often a matter of being patient with the weather and light. I’ve also found it’s much easier to move myself than the car—some photographers will move the car 10 times or more. I’m all over the place. I’m very physical, from lying on the ground to being harnessed into the back of a car on a race track.

How long does it take?
It depends on the shot list—it can take all day. I’ve been shooting a lot of celebrities with cars lately, and you usually get a short amount of time with them, so I really have to think on my toes.

What’s your biggest challenge?
Shooting motor-sports is the most demanding. You are working in any type of conditions: extreme heat, rain. It’s very demanding physically, and you don’t have control over it like you do with the other types of shoots.

What kind of postproduction work do you do?
Very little. I was a film shooter, so I’m a big believer in getting it right in the camera. I’d rather be shooting than in front of a computer. If there is something that needs a lot of work, there are professionals for that.

What gear do you use the most?
I use a Canon EOS-1D Mark IV with 24–70mm and 70–200mm f/2.8L lenses constantly. I love to shoot people with an 85mm prime lens. For motorsports, I prefer a fixed focal length, ranging from 400mm to 600mm depending on where I’m shooting. I also use a Canon Speedlite 580EX II flash.

Any photo tips you’ve learned along the way?
There’s a big difference between taking a picture and creating an image—the latter requires patience. The more you understand other forms of art the better your image will be. If it’s a killer image, your eyes will start in one place, go through, and come back to the starting place. When you set up a shot, look at everything in the frame and never center your subject. Cars are reflective, so you have to notice what’s reflecting in your image, which is why I always wear black.