Chris Haston captures images behind-the-scenes for shows like "The Office," at NBC Universal 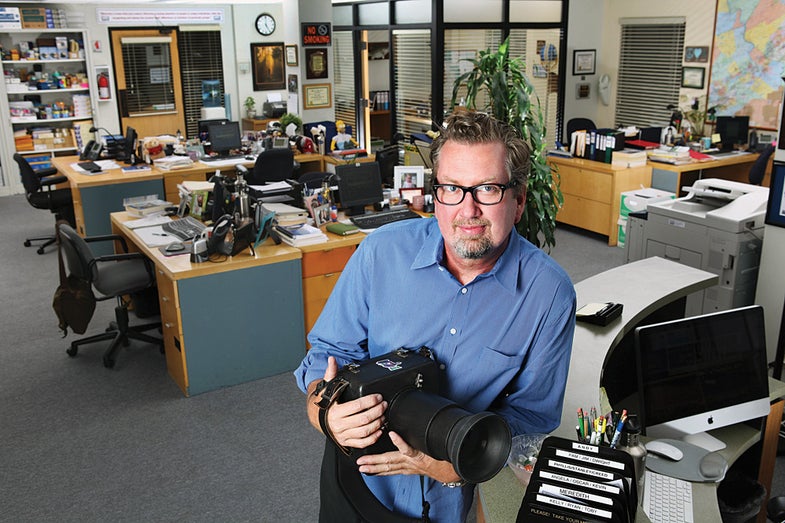 Captured here on the set of The Office, Chris Haston, 49, of Redondo Beach, CA, is a staff photographer for NBC Universal. You can check out his personal images at www.ChrisHaston.com. Dina Douglass
SHARE

Do you ever get star-struck?
It might sound jaded, but I learned a long time ago not to want to work with your heroes: You find out what they’re really like. I got to work with Robert De Niro on a feature—it was one of my dreams to work with him, but he’s one of the shyest people I’ve ever met. At NBC I have crossed paths with many celebrities. It’s amazing when you see someone who has such history, but when I have a camera in my hand I go into work mode.

How did you start out?
I’ve been at NBC for 25 years: I knew someone here and just kept bugging him. He said someone had to either die or retire, and eventually both happened. I was an auto racing photographer at the time, and for a year I kept that job while doing on-call part-time work for NBC before getting the full-time job.

How has your job changed?
When I started, we had 12 staff photographers, but NBC has changed hands over the years and there have been a lot of layoffs.

How many are on staff now?
Three in L.A. and one in New York. Here in L.A., besides me, there’s a studio guy and a guy who mostly shoots the Tonight Show. Five years ago, I stopped doing studio work and started doing more unit work.

How do they differ?
A unit photographer shoots stills on set that replicate what the motion-picture camera is getting. A studio photographer shoots the images for billboards and ads. These are more pre-lit, posed shots—it’s the rock-and-roll part of what we do.

Unit photography is a tough and sometimes thankless job. You’re the only person on set who can be asked to not do their job: If an actor doesn’t want you there, you have to leave, and then you have to explain to the photo editor why you don’t have the pictures. It’s one of the most difficult jobs in Hollywood—and one of the best. I have to build a relationship with an actor in the first 30 seconds and hold that for 10 minutes to 12 hours.

What’s your day like?
It’s different every day. I could get home tonight and find out that tomorrow I’m shooting a fake dead body in an alley for an ad, or taking the headshot of the president of the company, or covering a reality show for Bravo. Any time there’s an awards show I get a call, because I know all the executives and publicists and actors involved with those. My job is very versatile; I’m not just on the set. There’s no day that’s standard—I’m at a different show every day, and it’s rare that I’m ever in my office.

How do you prepare?
I usually travel with the same gear for all my shoots. In one bag I have a Canon EOS-1D Mark IV in a blimp—a soundproof housing—for unit work because it’s so fast. It’s best for shooting things like stunts and explosions, where you have to fire quickly. That bag also holds a 70–200mm f/2.8L IS and 24–70mm f/2.8L zoom. My second bag has more lenses and two other bodies, including a 5D Mark II. If I do a studio shoot, it’s a whole different ball game—NBC has a lot of gear, and we can take a truck and pre-light.

What’s your biggest challenge?
Dealing with personalities of actors. They are worried about getting their lines out and hitting their mark, and if they don’t have anyone else to pick on, the stills guy is always there.

What do you like most about your job?
I love that it’s completely different every single day—I don’t have to worry about getting bored with my job. The versatility of the job is great. I love what I do. I feel like I hit the lottery with this job.

Features
How to
I Photographer
photos
Shooting