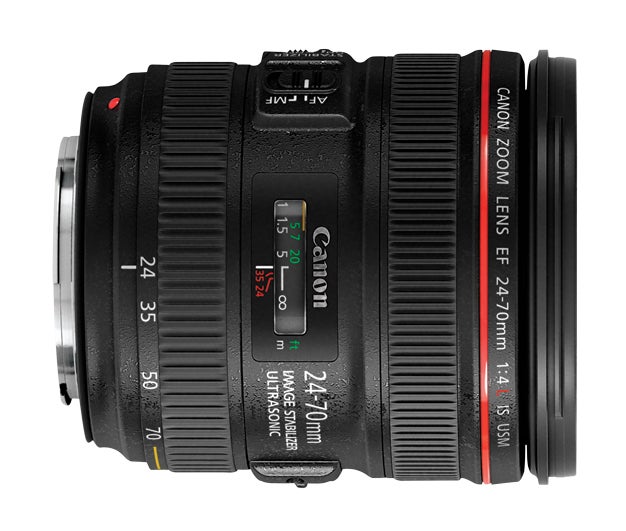 Because of the unusual way this lens deals with close-up shooting, with the lens in its macro range, some cameras will record 80mm as the focal length used (instead of 70mm). Also uncommon: Within the macro range, there's no subject distance scale—a small price to pay for 1:1.33.
SHARE

The full-frame EF 24–70mm f/4L IS USM ($1,399, street) is Canon’s first in this popular focal-length range to have an image stabilizer. Unveiled in late 2012, it boasts two expensive UD glass elements, an internal focusing design, a nonrotating barrel, and a reversible hood with a push-button locking mechanism. Like most Canon L-series glass, it offers desirable features such as a constant aperture (f/4), a fluorine coating for easy cleaning, rugged construction, and extra moisture and dust protection.

It deals with close-up shooting in an odd way, entering a special macro range via the zoom ring and a three-way barrel switch. One setting locks the lens to 24mm; another gives access to the full zoom range. The third setting, reached by pressing and holding the switch and turning the zoom ring past 70mm, locks it into the macro mode.

Even more unusual? A sweet-spot macro focusing zone that Canon indicates on the subject distance scale with a bold yellow line. When we shot within the recommended focusing distances, our images looked significantly sharper than when we shot outside of these distances. Magnification reaches 1:1.33, although sharpness maxes out at about 1:2. The close-focus distance at 1:1.33 put the front lens element about an inch from our subjects!

Canon shooters may be tempted by that Tamron, which saves you $200 and is a full stop brighter. But it lacks the Canon’s distortion control, magnifying power, compact proportions, and slightly stronger IS system (3.25 versus 3 stops). Which to buy? You decide!