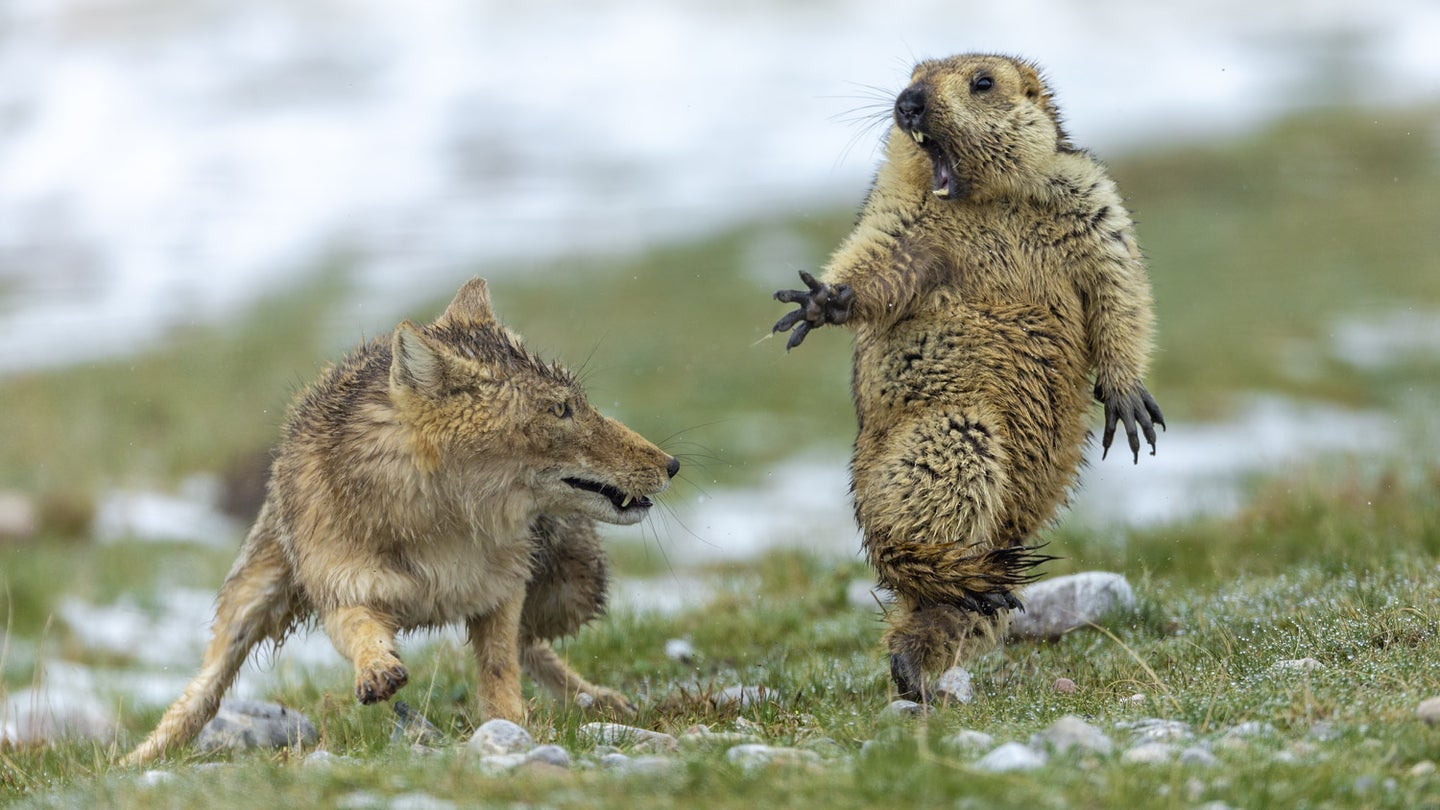 The moment. Yongqing Bao / Wildlife Photographer of the Year
SHARE

An opalescent squid drifts in the inky darkness of the ocean at nighttime. A marmoset with a face full of terror leaps away from a lunging fox. Hot tongues of lava emit clouds of noxious steam. These are some of the moments captured by the winners of the 2019 London Natural History Museum’s annual Wildlife Photographer of the Year competition.

Wildlife photography requires a truly astounding amount of patience, planning, and luck. This year’s winners tracked colonies of army ants through the rainforest, camped out in snow-covered deserts, and hid behind underwater shipwrecks in an effort to showcase the diverse majesty of wild places and beings. And they weren’t alone: The contest received more than 48,000 entries from 100 different countries in its 55th running.

Photographer Yongqing Bao received the prestigious Wildlife Photographer of the Year award for “The moment,” a gripping action shot featuring a standoff between a marmoset and its foxy predator. According to the judges, the image deftly combines “horror and humor” to capture “the drama and intensity of nature.” The image was taken on the rarely photographed Qinghai-Tibet Plateau.

Some winners chose to use their artistry as an opportunity for political and social commentary, like “Single Image” finalist Alejandro Prieto. The Mexican photojournalist projected an enormous image of a jaguar onto the border wall and snapped the image he would call “Another barred migrant.”

Ultimately, 19 winners were chosen for 18 different categories (with a joint award shared by two photographs for “Animal Behavior.”) These photographs, along with dozens of other notable submissions, will go on display at the London Natural History Museum starting Friday, October 18.

Under a luminous star-studded Arizona sky, an enormous image of a male jaguar is projected onto a section of the US-Mexico border fence—symbolic, says Alejandro Prieto, of “the jaguars’ past and future existence in the United States.” Today, the jaguar’s stronghold is in the Amazon, but historically, the range of this large, powerful cat included the southwestern US. Over the past century, human impact—from hunting, which was banned in 1997 when jaguars became a protected species, and habitat destruction—has resulted in the species becoming virtually extinct in the US. The photograph projected on the border wall is of a Mexican jaguar, captured with camera traps that Prieto has been setting on both sides of the border and monitoring for more than two years. The shot of the border fence was created to highlight President Trump’s plan to seal off the entire US‑Mexico frontier with an impenetrable wall and the impact it will have on the movement of wildlife, sealing the sad fate of jaguars in the US.

Cruz Erdmann was on an organized night dive in the Lembeh Strait off North Sulawesi, Indonesia and, as an eager photographer and speedy swimmer, had been asked to hold back from the main group to allow slower swimmers a chance of photography. This was how he found himself over an unpromising sand flat, in just 10 feet of water. It was here that he encountered the pair of bigfin reef squid. They were engaged in courtship, involving a glowing, fast‑changing communication of lines, spots and stripes of varying shades and colors. One immediately jetted away, but the other—probably the male—hovered just long enough for Erdmann to capture an instant of its glowing underwater show.

At dusk, Daniel Kronauer tracked a colony of nomadic army ants as it moved, traveling up to a quarter of a mile through the rainforest near La Selva Biological Station, northeastern Costa Rica. While it was still dark, the ants would use their bodies to build a new daytime nest to house the queen and larvae. They would form a scaffold of vertical chains by interlocking claws on their feet and then create a network of chambers and tunnels into which the larvae and queen would be moved from the last nest. One night, the colony assembled in the open, against a fallen branch and atop two large leaves, creating a structure that spanned 20 inches and resembled “a living cathedral with three naves.”

This colony of garden eels was one of the largest David Doubilet had ever seen—at least two thirds the size of a football field, stretching down a steep sandy slope off Dauin, in the Philippines. These warm-water garden eels are extremely shy, vanishing into their sandy burrows the moment they sense anything unfamiliar. Doubilet placed his camera housing just within the colony and hid behind the remnants of a shipwreck. From there he could trigger the system remotely via a 40-foot extension cord. It was several hours before the eels dared to rise again to feed on the plankton that drifted by in the current. He gradually perfected his set-up, each time leaving an object where the camera had been so as not to surprise the eels when it reappeared. Several days later—now familiar with the eels’ rhythms and the path of the light—he began to get images he liked. When a small wrasse led a slender cornetfish through the gently swaying forms, he had his shot.

Fur flies as the puma launches her attack on the guanaco. For Ingo Arndt, the picture marked the culmination of seven months tracking wild pumas on foot, enduring extreme cold and biting winds in the Torres del Paine region of Patagonia, Chile. For half an hour, Arndt watched this female puma creep up on the large, male guanaco. When the puma was within about 30 feet, she sprinted and jumped. As her claws made contact, the guanaco twisted to the side, his last grassy mouthful flying in the wind. The puma then leapt on his back and tried to deliver a crushing bite to his neck. Running, he couldn’t throw her off, and it was only when he dropped his weight on her, seemingly deliberately, that she let go, just missing a kick that could easily have knocked out her teeth or broken bones. Four out of five puma hunts end like this—unsuccessfully.

Red-hot lava tongues flow into the Pacific Ocean, producing huge plumes of noxious laze—a mix of acid steam and fine glass particles—as they meet the crashing waves. Kîlauea started spewing out lava through 24 fissures on its lower East Rift at the start of May 2018. In a matter of days, the lava had reached the Pacific on the island’s southeast coast and began the creation of a huge delta of new land. It would continue flowing for three months. By the time Luis Vilariño Lopez could hire a helicopter to fly over the area, the new land extended more than a mile from shore. Framing his shot through the helicopter’s open door, Vilariño Lopez captured the collision boundary between molten rock and water and the emergence of new land.

In a winter whiteout in Yellowstone National Park, a lone American bison stands weathering the silent snow storm. Shooting from his vehicle, Max Waugh could only just make out its figure on the hillside. Bison survive in Yellowstone’s harsh winter months by feeding on grasses and sedges beneath the snow. Swinging their huge heads from side to side, using powerful neck muscles—visible as their distinctive humps—they sweep aside the snow to get to the forage below. Slowing his shutter speed to blur the snow and “paint a curtain of lines across the bison’s silhouette,” Waugh created an abstract image that combines the stillness of the animal with the movement of the snowfall.

This may look like an ant, but then count its legs —and note those palps either side of the folded fangs. Ripan Biswas was photographing a red weaver ant colony in the subtropical forest of India’s Buxa Tiger Reserve, in West Bengal, when he spotted the odd-looking ant. On a close look, he realized it was a tiny ant-mimicking crab spider, just 1/5 of an inch long. Many spider species imitate ants in appearance and behavior—even smell. Infiltrating an ant colony can help a spider wanting to eat ants or to avoid being eaten by them or by predators that dislike ants. This particular spider seemed to be hunting.

Winner 2019, Animals in Their Environment

A small herd of male chiru leaves a trail of footprints on a snow-veiled slope in the Kumukuli Desert of China’s Altun Shan National Nature Reserve. These nimble antelopes—the males with long, slender, black horns—are high-altitude specialists, found only on the Qinghai–Tibet Plateau. A million chiru once ranged across this vast plateau, but commercial hunting in the 1980s and 1990s left only about 70,000 individuals. In winter, many chiru migrate to the relative warmth of the remote Kumukuli Desert. For years, Shangzhen Fan has made the arduous, high-altitude journey to record them. On this day, the air was fresh and clear after heavy snow. Shadows flowed from the undulating slopes around a warm island of sand. From his vantage point more than half a mile, Fan drew the contrasting elements together before they vanished.

It was early spring on the alpine meadowland of the Qinghai–Tibet Plateau, in China’s Qilian Mountains National Nature Reserve, and very cold. The marmot was hungry. It was still in its winter coat and not long out of its six-month, winter hibernation, spent deep underground with the rest of its colony of 30 or so. It had spotted the fox an hour earlier, and sounded the alarm to warn its companions to get back underground. But the fox itself hadn’t reacted, and was still in the same position. So the marmot had ventured out of its burrow again to search for plants to graze on. The fox continued to lie still. Then suddenly she rushed forward. And with lightning reactions, Yongqing Bao seized his shot. His fast exposure froze the attack.

Wildlife Photographer of the Year is developed and produced by the Natural History Museum, London.