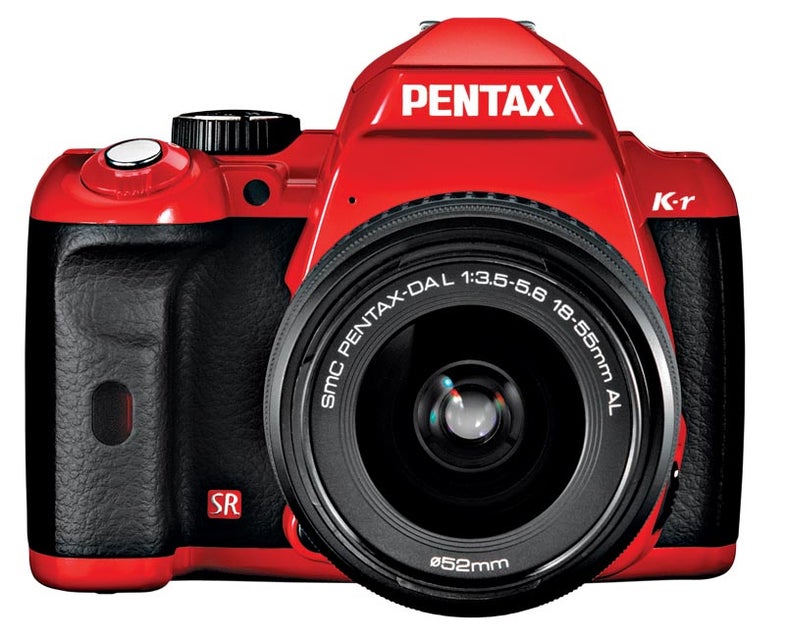 Pentax has long been known for making solid entry-level DSLRs. Its latest, the K-r ($710, street, with 18-55mm f/3.5-5.6 kit lens), shows a noticeable improvement over the popular K-x it replaces, and continues a newer Pentaxian trend: colorful DSLRs. It is available in red, white, and the traditional black.

Of course, with style must also come performance, and during its time in the Popular Photography Test Lab and out in the field, the K-r proved that it’s got plenty of substance to back up its fashion sense.

The K-r receives top honors in Color Accuracy, with an Excellent rating, thanks to an average Delta E of 7.4 from 8-bit or 16-bit TIFF ﬁles. Both the D3100 and T2i also scored Excellent in this test, as do most DSLRs these days.

Given these different pixel counts, noise is a salient topic. The K-r keeps it Low or better up to ISO 800, as do the Canon and Nikon. Above that, the Pentax bests them both: At ISO 3200 noise from the K-r remains at a Moderate rating with a 2.5, while the D3100 and T2i rated Unacceptable.

And at ISO 6400 and above, all three received Unacceptable scores in our tests, though the Pentax remains at least a half-point ahead at each stop—and its sensitivity reaches ISO 25,600, a level that neither the Canon nor Nikon offer.

Autofocus is a similar story. The K-r includes Pentax’s new SAFOX IX AF system. Although it has the same 11-point array as its predecessor, it performed better in our lab tests, focusing in less than a second all the way down to EV 1; the K-x did so only down to EV 2. Furthermore, the new Pentax either beats Nikon’s D3100 or remains within two hundredths of a second at all light levels in our tests except EV –1 , the dimmest light in which the two cameras were able to focus.

The K-r is faster than the Canon in bright light and slower in dim light. From EV 12, the brightest level in our test and tantamount to full midday sun, through EV 6 the equivalent of a well-lit interior, the K-r focuses faster. At EV 4 and below, though, the Canon locks on its target ﬁrst, and it can focus in the darkness of EV -2, while the Pentax (like the Nikon) fails to focus in such dim environs. In this case Canon’s extra cost gets you something useful.

In the Field
A very comfortable grip, with a particularly well-defined notch for your middle finger, makes the Pentax K-r a pleasure to hold. Despite the solid feel of its stainless-steel chassis, it’s not extensively weathersealed.

Pentax makes good use of the relatively few buttons on the K-r’s body. Menu-navigation buttons serve double duty for access to drive mode, ISO, white balance, and ﬂash settings. As usual with Pentax, the ﬂash menu screen lets you change output in addition to ﬂash mode.

Then there’s the LCD-based control panel, accessed by pressing the Info button. Its icons let you change any setting you’ll need during regular shooting situations, such as sensor-shift image stabilization or AF or metering modes.

Burst shooters, take note: The K-r ups the ante for entry-level cameras with its 6-fps burst shooting. It captures up to 25 JPEGs or 12 RAW shots at that pace.

In our ﬁeld tests, the AF system did a ﬁne job of keeping up with subjects moving toward or away from the camera, as well as those moving across the frame. Used with the Pentax smc DA* 16-50mm f/2.8 ED AL SDM lens, the K-r matched pace with cars that were obviously exceeding the 35mph speed limit in Manhattan. However, the AF stuttered a bit when we zoomed while bursting with the camera set to focus-priority continuous AF.

When we shot with the same lens in a living room trying to keep up with a toddler, it fared better and we got some nice shots. Given that many people look to step up to a DSLR for just this type of shooting, this is a good sign. Video in the K-r caps out at 1280x720p and uses the non- standard 25-fps frame rate instead of 24 fps. While the footage we shot looked nice in terms of sharpness and color saturation, we would have liked to see 1920x1080p and a standard frame rate. (Of course, newcomers to DSLRs would probably be happier with the no-nonsense ease of camcorders than any DSLR’s video experience anyway.)

Live-view shooting was another matter. While the 3-inch, 921,000- dot LCD screen is ﬁxed, the contrast-detection AF was comfortably speedy by DSLR standards. It can’t match what you’ll get from an interchangeable-lens compact, such as the Olympus Pen E-PL2. The K-r will focus continuously in live view, but, given its sluggish contrast AF, it won’t keep up with fast-moving subjects.

Bottom Line
Pentax’s K-r is fun to use and has enough resolution for prints as large as most family shooters are likely to want. That it has one more stop of acceptable noise control than Nikon’s D3100 and Canon’s Rebel T2i adds to its appeal.

If you have older Pentax lenses around from the ﬁlm era, the K-r will accept them. And the sensor- shift stabilization in the body will work with any lens, unlike Nikon and Canon’s lens-based stabilization systems. If you don’t have any Pentax lenses, you’ll have to weigh whether the extra money the Canon Rebel T2i costs is worth it for perks such as low-light focusing.

If you’re considering stepping up from the K-x, the K-r will get you an extra stop of acceptable ISO, plus slightly faster AF overall. Not a bad deal if you ask us.