Flickr has gotten a facelift with new search and organization features 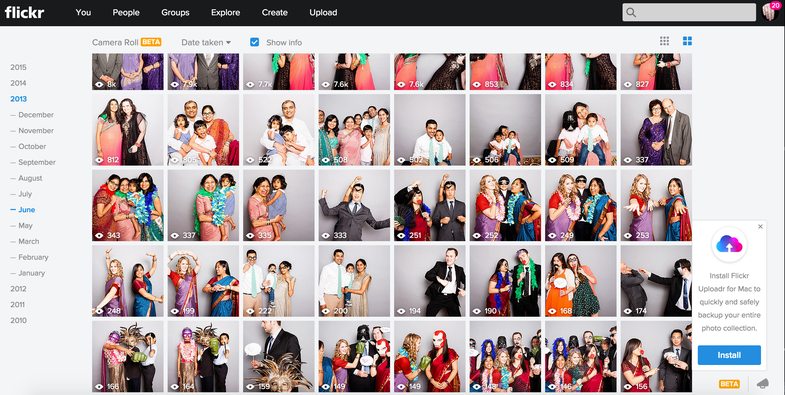 If you jumped on to Flickr today, you probably noticed that there are a few differences in the look and feel thanks to their new upgrades. Here’s a rundown of what’s new.

The big new addition is the Camera Roll functionality, which you may have started seeing in Beta before today. Basically, Flickr is integrating the familiar photo presentation that we’re now so used to from our smartphones. The difference, however, is that Flickr is applying some of its image analyzing power and allows you to automatically organize photos by things like color and type. So, if you want to see all the photos Flickr considers a “landscape,” you can do just that in what they call Magic View. If you have a ton of photos in your pool that are scattered around, that might actually come in pretty handy, but if you’re litigious about organization, it might not get as much use.

The new Uploadr tool tries to streamline the process of uploading from mobile and desktop and then integrate all of those photos together. It now automatically uploads photos from your phone like other applications from Drop Box and Google+.

The mobile app has been updated to match the desktop experience as well, so there’s a more coherent thread between the two.

Flickr’s redesigns have not always been universally loved, so it will be interesting to see what the reaction is to this one. The market is likely a lot more fragmented now than it was when they first changed things up and blew up the internet with people discussing the impact of the changes.

So far, though, this seems like it could be a positive. The apps now include some features uses have been wanting (automatic upload), and tweak some other important things like the embed code.