13,000 fans moshed at home as a metal band streamed from an empty venue. 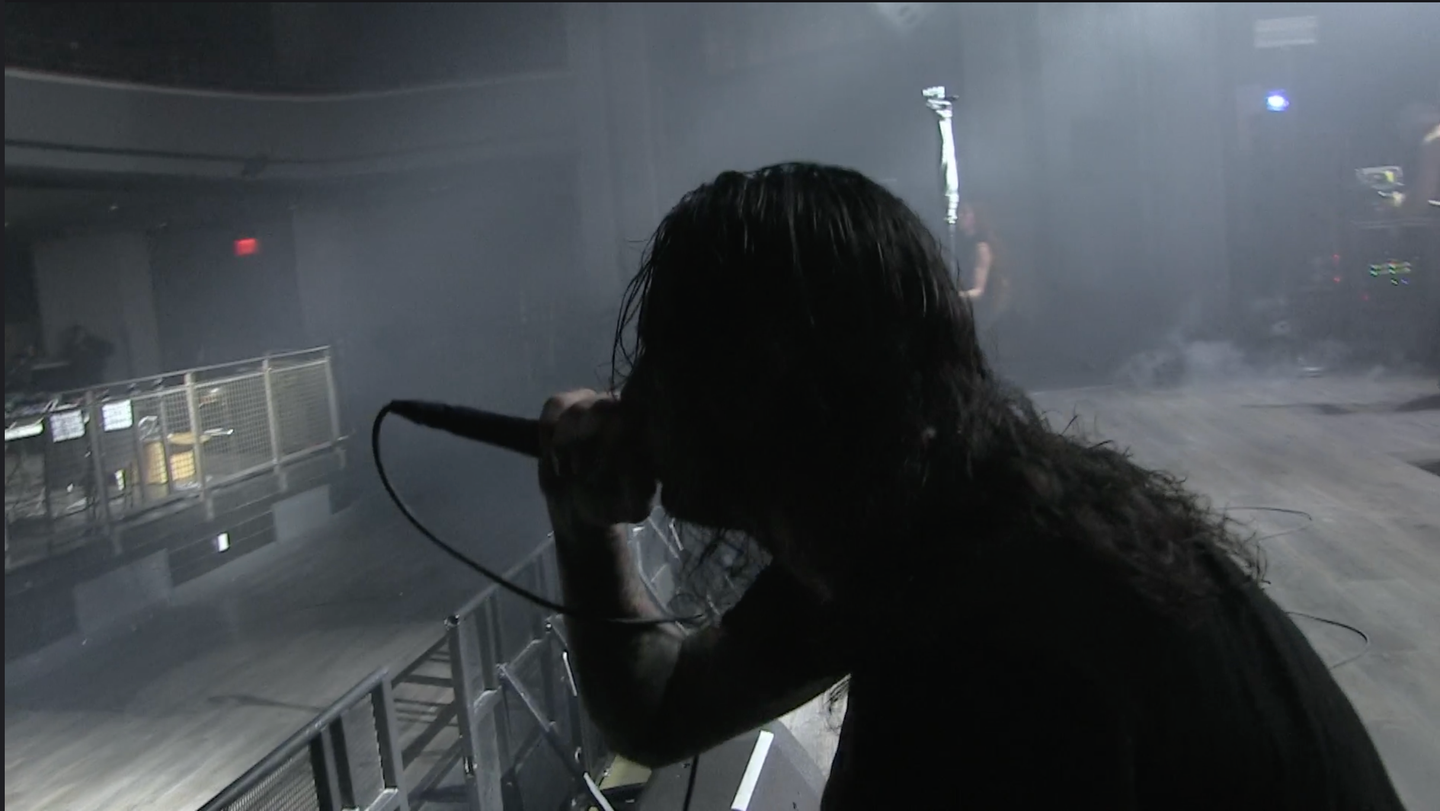 That space in front of the stage should be packed with fans. Code Orange
SHARE

To an unfamiliar eye, the average a show from Pittsburgh-based metal outfit, Code Orange, looks like large-scale melee. As the band literally screams through their set, the audience yells, whips their hair, and climbs all over each other. The crowd is a fundamental part of any metal or hardcore band’s performance. Right now, however, social distancing stands in its way thanks to Coronavirus. Venues have limited capacities or have canceled shows completely, which has left touring musicians with lost ticket sales and bins full of T-shirts and other merch they hoped to sell on the road.

The band found themselves in a particularly tough spot. Their new album Underneath debuted on March 13th and its record release show was set for Saturday night in Pittsburgh, PA. The show’s fate was uncertain until roughly two days before it happened. It was obvious that fans couldn’t responsibly pack the sold-out venue. The band would still play, but the audience would watch via livestream on Amazon’s video game-centric platform, Twitch. Meanwhile, the massive theater was basically empty.

Note: The video below contains strong language, some sci-fi horror imagery, and flashing strobe lights not appropriate for some viewers.

Watch LAST ONES LEFT: Fear of the End // 3.14 9pm EST from codeorangeofficial on www.twitch.tv

Many venues are turning toward live streaming while patrons can’t attend in person, but Code Orange had a specific vision in mind for how they wanted the show to look, and veteran videographer and cinematographer Sunny Singh was onboard to help. He keeps an extensive archive of punk, heavy metal, hardcore, and other alternative band concerts on his site, Hate5Six.com. He had done live streams in the past, but only for very simple productions. “If we were going to do this,” he says, “we figured we would set a standard and try to show bands what you can do without a huge budget.”

Some venues have live-stream setups already installed, but they typically involve static wide-angle cameras positioned at safe angles designed to capture the entire scene. For Code Orange’s set, Singh used an array of six cameras, including several mounted around the cub and two hand-held camcorder-style Canon cameras on-stage to get close and add motion to the scene.

From a viewer’s standpoint, the human camera operators helped match the energy of the performance. “The band was fully committed,” says Singh. “They went out there and played as if the room was packed.” In reality, there was only around 20 people inside a venue that typically seats 1,500 to 2,000 fans.

Even though he has been using the cameras for a better part of a decade, they’re particularly well-equipped for this kind of shooting at least in part because they have ethernet ports built in. Those high-speed connections allow for a rock-solid transmission line between the camera and the board.

Music venues have a surprising amount of wireless waves bouncing around inside—many microphones, instruments, and even monitors connect wirelessly and can jam up frequencies that could interfere with video streaming gear.

Media Quest, a local production and logistics company, provided some of the extra gear that the crew needed in order to pull off the shoot. A director at the board worked in real time—with cues from the band’s production team—to switch between angles. The band also created slick, pre-produced material that’s meant to play on a large screen at the back of the stage that the director cut into the stream in real time.

“We got in there at 11 AM and set up and spent all day running tests and doing dry runs,” Singh explains. “I spent time doing internet speed tests and making sure that the stream wasn’t going down.” Even if the footage looked and sounded great in-house, however, getting it out to the public isn’t quite as simple.

Singh set up a dummy account on Twitch just to see how it would ultimately look for viewers once live. “If someone had randomly stumbled into that dummy stream,” he laughed, “they would have gotten to see the band practicing.”

For qualified accounts, Twitch allows streamers to accept donations and subscriptions, which come with a monthly fee. Collecting funds from viewers directly through the stream could help to offset some of the revenue bands will lose because they can’t sell tickets to the shows. Down the line, it could also include pay-per-view options. Services like Cleeng and Lightcast.

But, in the short term, many bands and venues are choosing to keep things relatively simple in an effort to provide an experience that’s entertaining, but more importantly, isn’t frustrating. For the Code Orange show, Singh pulled audio directly from the soundboard to get the cleanest signal. That can sometimes lead to sync issues between the audio and the video coming from the separate cameras, especially if the cameras rely on a wireless connection.

The Code Orange stream seems to have been a complete success. Social media buzz—and a general atmosphere that encouraged people to stay home on a Saturday night—had people in the stream’s waiting room before the band even started playing. And more than 13,000 concurrent viewers tuned in during the live stream.

The comments during the set were rowdy and enthusiastic. A regular flow of emojis popped up, but it remained largely civil.

As of Monday Morning, more than 30,000 viewers have watched the recorded broadcast, and an even higher-quality version will go up on YouTube in the coming days. With shutdowns in effect for the foreseeable future, more bands and venues have already announced more live-streamed performances from empty venues.

Punk mainstays The Dropkick Murphys are playing their annual St. Patrick’s Day Show (which they have been playing for decades) via free live stream. Phish has already livestreamed many of its concerts and has teased the idea of doing so in front of empty venues. Even the Met has announced plans to broadcast opera performances.

Singh says that, going forward, the most important thing venues can do in order to make streaming simple is to provide ample reliable internet. If you don’t already follow bands you like on social media, now would be a great time to do so in order to find out if and when the streams might happen.

Also, if you have some extra cash, there is a ton of would-be tour merch up in bands’ online stores and they could use the support. Watching a stream and online shopping can’t match the experience of going to a show and handing cash to the merch guy. But, at least your new shirt won’t have as much other people’s sweat on it when you get it home.