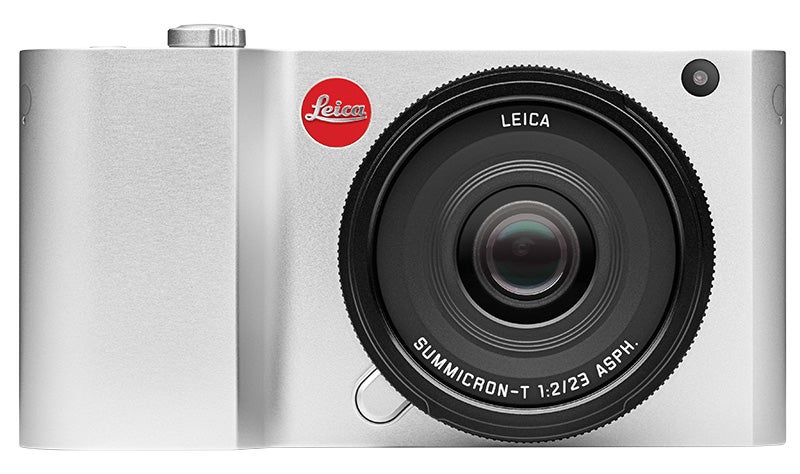 Leica has a split personality, straddling the line between luxury brand and maker of workhorse professional cameras. The Leica T (Type 701), at $1,850 (street, body only), falls more in the luxe category and represents an entirely new system for the company.

Price aside, on paper the Leica T, with its 16.3-megapixel APS-C-size CMOS sensor, appears to be a worthy competitor in the crowded rangefinder-style ILC market (specifically cameras with APS-C and Four Thirds sensors). This roster includes the Fujifilm X-E2 ($800, street, body only), Olympus Pen E-P5 ($800, body only), Panasonic Lumix GX7 ($848, body only), Samsung NX3000 ($530, with 16–50mm lens), and Sony a6000 ($649, body only). But it lacks some features that many of these boast, such as image stabilization, phase-detect autofocus, and a built-in electronic viewfinder.

The most striking thing about the camera is its single-piece aluminum body; Leica tapped Audi designers to get the look. Its 3.7-inch touchscreen, the biggest in this class of ILCs, displays a surprisingly intuitive interface. We were eager to run it through the Popular Photography Test Lab and give it a workout in the field.

The Leica T earned our second-highest rating of Extremely High in image quality at ISO 100–800. Its resolving power matches that of the competition, with an average of 2325 lines at ISO 100 in our tests, not far below the 2500-line cutoff for Excellent. Its resolution rating hit Very High at ISO 3200 with 2160 lines and High at the top ISO of 12,500 with 1900 lines.

The camera ships with Adobe Photoshop Lightroom; we used the latest version, 5.6, to apply various levels of noise reduction manually in converting the RAW files we shot under test conditions in our lab to TIFFs for measurement in DxO Analyzer 5.3. We found that 25% luminance reduction for ISOs 100–400 and 50% for ISOs 800–12,500 yielded the best balance between noise control and resolution.

Noise stayed in Extremely Low territory for ISOs 100 and 200, and pushed into Very Low for ISOs 400 and 800. Noise was Moderately Low at ISO 1600, just squeaked into Moderate levels at ISO 3200, and hit Unacceptable for the two top sensitivity settings.

To compare, both the Samsung NX3000 and Olympus E-P5 eked out Moderate ratings up to ISO 6400. But the Leica did tend to keep noise levels in check better than the Fujifilm and Sony at the upper reaches until ISO 12,500, where its score fell to 5.7 compared with 3.5 for the Fujifilm and 3.8 for the Sony (all Unacceptable on our rating scale).

Where did the Leica truly excel? Color accuracy, where its average Delta E hit 4.9, easily in Excellent territory. All of its rivals also logged an Excellent rating, but the closest any came to its numerical score was the Samsung, at 5.5.

Bulkier than its rivals, the Leica T is also the least ergonomic of the bunch, though it is quite attractive to look at. Its solid aluminum design makes it uncomfortable to hold for long periods of time; the edges of the camera are sharper than we’d like and tend to dig into the hand. The $80 case, a silicone skin that covers the front of the body during shooting, doesn’t help all that much, as it, too, has sharp edges.

The T has no built-in EVF—though Leica’s accessory Visoflex Tp 020 EFV, which slips into the hot-shoe, can be yours for $700 (of its competitors, only the Olympus Pen E-P5 and Samsung NX3000 lack an EVF). We split our time using the Visoflex and the LCD to frame shots, and found the Visoflex on par with or better than the competition in resolution and detail. However, we experienced some serious image lag when we pressed the shutter button halfway to lock focus and then moved the camera around. This delay was also visible on the LCD.

Autofocus proved a crippling issue in our field tests. With no phase-detect AF points, the Leica is at a major disadvantage compared to most of its competitors. Although it focused fine in moderate or brighter lighting, it still felt sluggish compared with most other ILCs. In low light, AF frequently failed or took far too long to be of help. Another quibble: the Leica T’s smartphone-style touch-to-focus mode cannot be used when shooting with the accessory EVF.

In terms of button layout, the Leica T has two unmarked control dials, whose functions change based on shooting mode, plus a video record button and a shutter button that doubles as both an on/off switch and a flash engager. Nearly all controls, except for basic exposure adjustments, require users to interact with the touchscreen display. This is reminiscent of a smartphone, with items laid out in a neat square grid you can arrange to suit your own shooting style. There are two sets of menus, the first of which is quicker to access; you can add items from the secondary menu to the primary one for faster control.

The touchscreen is fairly responsive, though the interface can lag. This is especially true for image playback, which, by the way, is one of those hidden functions that make reading the user’s manual a must: You must swipe down, with some force, from the top of the screen to access and review images. Still, the UI is one of the high points of Leica’s new system—very intuitive, especially for smartphone users.

Alas, this touchscreen is fixed in place. Other than the Fujifilm X-E2, this is also the only camera in its class without a tilting LCD.

Another drawback: The Leica T offers no mechanical image stabilization of any kind, neither a sensor-shift system nor a lens-based optical one. Its only IS option simply takes two frames instead of one and combines them for a sharper-looking picture; it works only at shutter speeds of 1/10– 1/30 sec and ISOs through 1600.

Wi-Fi connectivity is another issue. At this point only an iOS app is available. Furthermore, the only way to connect to a device is if both the camera and iPhone or iPad are on the same outside network; unlike every other current Wi-Fi-enabled camera, the Leica cannot simply be paired with the device through an ad-hoc network. Once connected, you can either control the camera remotely or push photos to the device and from there to the web.

The Leica’s built-in flash pops up with pleasing force but is somewhat underpowered, with a guide number of just under 15 (feet, not meters!), ISO 100. The hot-shoe for accessories is helpfully centered over the lens. To the right of the touchscreen you’ll find a small plastic door that swings out to reveal the slots for an SD card and USB cable.

One unique and stylish feature is the peg-to-socket strap. Made of silicone, it is super clean and can only be removed from the camera with a tiny special key (very similar to the key used to remove a SIM card from some smartphones). The strap tends to get twisted, and the proprietary system means no third-party straps for now, but at least it looks cool.

In the Leica’s video footage we saw more artifacts than in that of competitors, even at lower ISOs. Manual control is limited during video capture to exposure compensation, and the frame rate is locked in at 30 fps. Leica put a modest stereo microphone on the top of the camera; there is no option to control audio levels, though there is a wind-cut filter. Nor is there an audio input. If you’re really into video, look elsewhere; for the price of this camera, you could buy a Panasonic Lumix GH4.

Add just one lens to the pricey body and you’ll have to cough up at least $3,600 to enter this system. Compare this to the Sony a6000, also a rangefinder-style ILC with an APS-C sensor (plus a built-in EVF), which streets at $800 with a kit lens.

So while the T is a solid step toward a forward-thinking, more affordable Leica ILC system, it is still priced too much like a Leica—that is to say, not really comparable to most of the field. Its image quality is quite good and can stand up to similar cameras in the category. Its interface design is great. But some major features are lacking, and its performance is somewhat slow.

If you’re not wealthy and swayed by style, the Leica T might not be the camera to buy; two generations from now, it may be. We can only hope to afford it by then.