Snapchat Spectacles Are Sunglasses With Built-In Cameras For Maximum Snapping

These "limited" camera glasses will make sure your entire life gets "snapped." 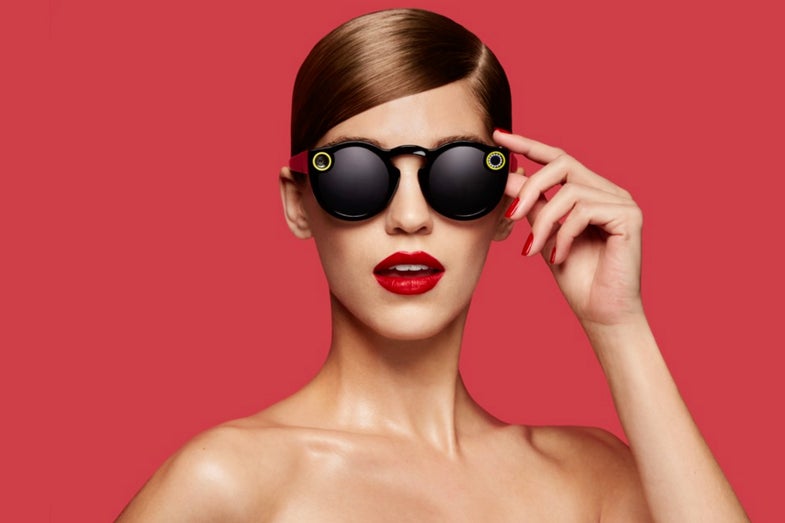 When you go to the Snap Inc. homepage, you’re greeted with a rather ambition message, floating in a sea of that easily-recognizable Snapchat yellow color.

The first hardware product from Snap Inc. is called Spectacles, and it consists of a pair of sunglasses with some cameras built-in specifically for sharing videos Snapchat. The Spectacles have a 115-degree camera built-in to record video in 10-second increments, for a total of up to 30-seconds in length.

Once the video is recorded, it can be stored in the on-board memory until it’s dumped later to a smartphone or computer via Wifi. With iOS devices like the iPhone and the iPad, the Spectacles use the built-in Bluetooth connection to immediately transfer the videos so they can be uploaded, but at a lower resolution. We are talking about Snapchat here, though, so resolution isn’t exactly paramount.

Right now, the plan is only to release Spectacles in limited numbers, which suggests the company doesn’t expect them to become something everyone wears at all times in order to Snap their entire lives. But, the life-logging camera segment has been trying to get traction for several years now, so maybe Snapchat’s enormous user-base can help goose it.

If you want a pair, they come in three appropriately-hip colors and will cost $130, which should also suggest what kind of image quality they will be bringing to the table.