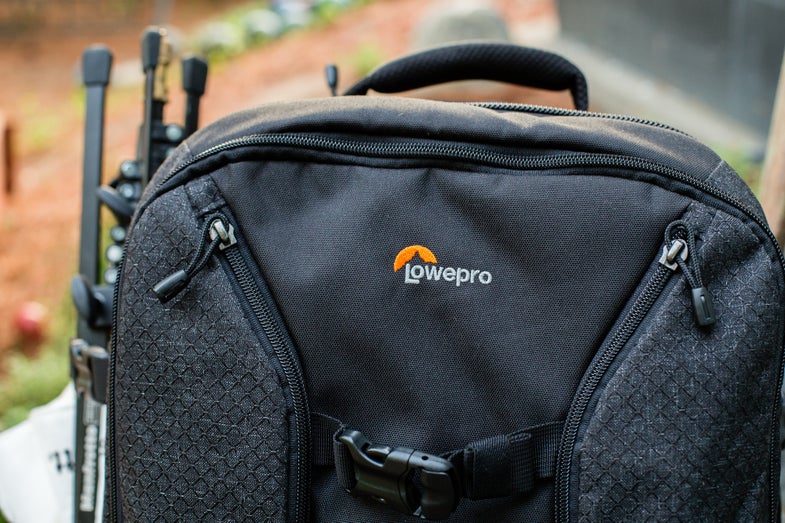 When it comes to full-system camera backpacks, the Lowepro Pro Runner series has been a popular option for quite some time. Now, Lowepro has updated the Pro Runner series with three new models and I’ve spent some time testing out the 450 AW II.

What is it? The Pro Runner series is meant for working photographers who need to bring a lot of stuff with them on shoots. My typical load out includes four total lenses, two bodies, three flashes, a small “lunchbox” full of Pocket Wizards, and some accessories, all of which fit into the Pro Runner 450 with room to spare, so that gives you an idea of what kind of bag you’re dealing with.

Storage This is an extremely familiar configuration for a pro-grade backpack with modular padding. You get a ton of dividers you can move around to accommodate your gear. The bag is designed to hold camera bodies with lenses attached running straight down the middle of the main compartment, shotgun style. Oddly, I actually had a little bit of trouble fitting two bodies face to face with a 70-200mm and a 24-70mm lens respectively, which seems like an extremely common gear configuaration. Once the bag was broken in a little, it got easier to fit them, but I actually found it easier to just keep the 50mm lens attached to the body on the bottom. You could also just keep the second body without a lens during transport, which makes arranging the gear simpler.

The main compartment is extra deep, which means it can easily accept pro-sized bodies, or cameras with battery grips attached. The compartments are also tall enough to accept a full-sized speed light standing straight up, but they do stick out over the top a little bit. It didn’t prevent me from zipping the bag, but it got a little tight once I put a laptop in the laptop compartment.

There are two small rail-style pockets on the front of the bag that bookend the tripod storage area. They’re narrow, but perfect for things like memory card wallets and spare batteries, which you want access to without opening the main compartment.

The front flap opens to reveal a laptop compartment as well as a slot specifically for holding a tablet, and it’s nice to have a place for both. There’s also a zippered pocket, which I was able to fit a small pill bottle into (it’s allergy season, after all), but anything chunkier would be a tight squeeze.

The bulk of the accessory pockets are actually on the inside of the main compartment. They’re fairly roomy, but still have to stretch out a bit to hold something like an umbrella clamp.

On the whole, the bag has enough storage for everything I need, but I get the feeling they expect this bag to last a long, long time. As such, they have made things a little tight at the start so that it won’t get all sloppy as it stretches out with years of use. So, you might want to break it in a little by keeping it fully packed during storage.

It’s also worth noting that this bag opens from the front, which means that if you set it down on the ground to get at your gear, the straps will be in the dirt. Many of the newer adventure-style bags open from the back, which keeps your back from getting dirty if you’re shooting in the field. The trade off, however, is that you can splay this bag wide open and sit it on a table, which is much better in a controlled or studio setting.

Protection I have never found Lowepro lacking in terms of padding and it’s no different here. I would like to see a slightly thicker pad specifically to go between the two cameras that face each other, but that’s likely just my own neuroticism. The padding built into the bag is thick and dense, just the way it should be.

The material itself seems to be extremely water resistant. I took it out in a driving rain and had no trouble keeping things dry without the added rain cover. The rain cover is also fairly robust, but does take up extra space in the bag.

Fit You get a ton of flexibility with this bag in terms of fit. You can make the straps extremely long if you want. I’m big and rather tall, and I didn’t come close to maxing out the straps when wearing it. The straps are thick, but wide, so they don’t roll, which was a bit of an issue I had with the older version of the Pro Runner series.

On a normal frame, the bag feels big, but not absurdly so as you might expect from a full system bag. There’s a nice balance to it, which isn’t the case with every large bag.

As always, the waist straps, when worn, make carrying the bag a lot easier. Putting the weight on the hips rather than leveraging it all against the shoulders and upper back makes the bag feel considerably lighter. The waist straps have thick padded wings and sturdy clips. When you’re not wearing the waist straps, though, those thick wings tend to feel like they’re in the way. The straps also hang down when they’re not clipped and they can get caught on things, which is a familiar problem for users of this kind of bag. The best solution, really, is to just use the straps when you have the bag on your body.

One side of the bag has a handle for carrying it horizontally, which I actually love. Being able to grab the bag from more angles is always a plus for me, since I’m sometimes in a hurry. There’s also a method for attaching it to the handle of a rolling bag. I’m not a big rolling bag guy, but I’m sure that’s a very desirable feature for the roller users.

Build Quality One thing that hasn’t changed from the old version is how bombproof all the materials feel. The zippers are super burly and the shell feels like it will last for a very long time. It’s soft, but sturdy, which is exactly what you want in a bag that’s built for work. I rubbed some sand paper on the shell just to see if it would raise up the little nylon frizzies that typically show up after lots of use, and it didn’t flinch.

Other models In addition to the Pro Runner BP 450 AW II that I was testing out, Lowepro also has two other models. The BP 350 AW II is a smaller version of the same bag, which is meant to hold a 13-inch laptop instead of a 15-inch like the 450. Otherwise, it’s extremely similar.

The RL X450 AW is actually a kind of hybrid bag that incorporates a really similar backpack design, but also a handle and a set of wheels, so you can use it like a roller. It’s a clever design that adds flexibility.

Who should buy it? When it comes right down to it, this is a pro-grade camera bag, and if you’re a working photographer, this is a very worthy follow-up to the Pro Runner series that came before it. The $300 price tag isn’t cheap, but it’s also not nearly as high as it could be. I could see an enthusiast or an advanced amateur using this to store their entire kit and bring it along on big shoots, even if they don’t have an assistant to lug it.

It’s comfortable, tough as nails, and fits a ton of gear, without falling into the recent trend of flashy “adventure-style” bags.