Preparing for Hurricane Florence when you are a photographer

How one wire photographer got ready for this slow moving storm. 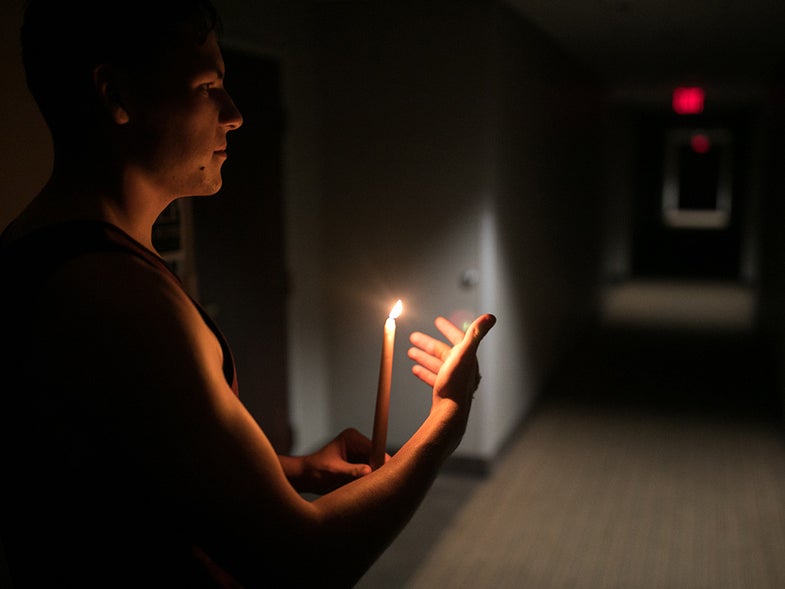 Richardson Tumulak brings a candle into and elderly couples room after the Sleep Inn hotel they were staying in lost power on September 13, 2018 during Hurricane Florence. Logan Cyrus/AFP/Getty Images
SHARE

Last Friday, Hurricane Florence made landfall in Wilmington, North Carolina and began its slow move inland, causing massive flooding through the region. In the days leading up to the storm’s arrival, while everyday citizens were evacuating their homes or making the decision to shelter in place, photojournalists were plotting how they would cover the story.

Logan Cyrus, a freelancer based in Charlotte, North Carolina who often shoots for AFP, learned that he would be covering Florence on September 8. He started shooting on September 10, four days before the storm made landfall to document the preparations. His end date was ambiguous.

“You have so many variables to take into consideration when prepping for a natural disaster,” Cyrus said via email. “Other assignments you typically have an end date. With a natural disaster you could finish early or be out for weeks. Being ready for that is important.”

Some essential storm supplies are obvious: extra gas, food, water, and cash. But photojournalists have other needs: rain gear for themselves and their cameras, power banks for batteries and laptops, and a way to transmit images.

“90 percent of the time my workspace was my vehicle. My desk was pretty much my pelican case with my MacBook Air, and wifi hotspot,” Cyrus says. “I go into it with the idea that there will be no power, no wifi, and no good place to file.”

Cyrus says it helps to speak with other journalists when preparing to cover an assignment like this, everyone has a few tips that you may not have thought of.

“Many times it’s the little creature comforts you may overlook while packing that make a big difference when you are stuck in a dark hotel room with no AC,” he says. “A good example is bringing a nice bottle of bourbon for sipping and sharing after a stressful day of shooting.”

The days can certainly be long. During his time covering the storm Cyrus was typically pulling 10-14 hours, often shooting in high winds and heavy rain, taking breaks from the elements to file images to his editor three to five times per day.

Staying hydrated, remembering to eat and getting as much rest as possible during those long days is also crucial.

“The last thing myself or any other journalist covering something like this wants is to become a burden on EMS,” says Cyrus.

The locations you end up shooting in can also change in an instant during a storm like Florence—you have to be constantly monitoring road conditions to keep from getting stuck. Cyrus says he spent the bulk of his time photographing in Jacksonville, Swansboro, Sneads Ferry/Topsail Island, and New Bern, searching for images that showed the storm from a human perspective.

“The point of me being there is to show people who aren’t what’s going on. Most of the time that looks like preparations, the actual storm hitting and aftermath,” he says. “Finding any sort of humanity in those situations is crucial.”

Florence was downgraded to a tropical depression on Sunday, but the storm has still dropped record-setting rainfall on the region, the risk of flash floods is still high and photojournalists are still out there making images that document the effects of this natural disaster.