The Year of the Rockers

These five new photo collections will rock your world. 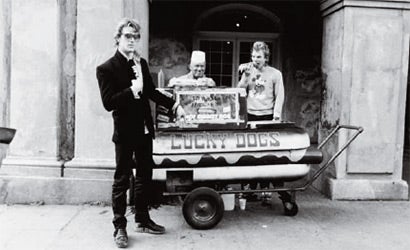 Is there an essential connection between rock and roll and photography?
Candid portraits are often a function of access and chemistry. Such is the case with Road Work: Rock & Roll Turned Inside Out (Hal Leonard, $30), by Tom Wright. A close friend of the Who, Wright photographed much of that groups glamour and excess; he also toured with the Rolling Stones, Faces, Led Zeppelin, and the Eagles, 35mm SLR in tow, recording madcap moments and trenchant observations.

A more focused sense of intimacy underlies Patti Smith: American Artist (Insight Editions, $40), by Frank Stefanko, who befriended Smith long before she became punk’s poet laureate. His book reveals Smith’s complexity, with glimpses of a charismatic but enigmatic star in the making.

For an insider’s view of rock stardom, Andy Summers mines his photo trove from his peak years as guitarist for the Police in I’ll Be Watching You: Inside the Police 1980-83 (Taschen, $400). This limited-edition tome has fly-on-the-wall views of touring mayhem and tedium, showing the sparks and grind of being in such a creative, yet volatile, band.

An alternative view of the same group is in The Police, 1978 to 1983 (Little Brown, $30), by photographer Lynn Goldsmith, who befriended the trio and shot portraits and live scenes as the band conquered America.

From another side of the lens, Lou Reed’s New York (Steidl, $50), brings vivid skies and dancing light patterns into cityscapes, capturing fleeting beauty with a rhythmic flow and suggesting that sound, light, and vision are all part of a continuum.
Read our Q&A with Reed on the next page.

Many of the photos in your New York book show the city in a beautiful light; some look like they weren’t made in the city. Was that intended?

Yeah, we’re always surrounded by the buildings here, but I wanted to document some beauty. New York is always changing, moment to moment, and we are this glorious island, and we usually don’t think of it that way. You kind of take it for granted. But if you do stop and look, it’s really an astonishing sight, every day.

Some of the shots are creatively blurred, with streaking light patterns. Is that all done in camera?

Yes it is. If you spend a lot of time doing that, you learn that if you move the camera a certain way, it does certain things. Like there’s one where it made notes. I thought that was amazing — all these musical notes dancing across the Hudson River.

I’ve been doing other things. I like variety. I put my pictures in a slide-show monitor on my Mac, with a Ken Burns effect, which can fool you into not recognizing your own photos. Every once in a while I’ll glance at one before I know it’s mine, and it just kills me, it’s so beautiful.