A Woman’s Search for Self

Sophia Tolstoy was a talented photographer, creating evocative self-portraits long before they were artistically fashionable. 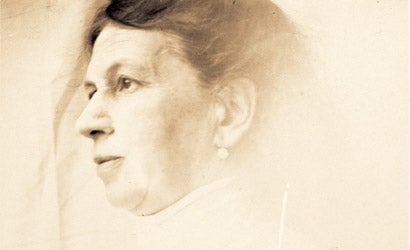 In 1887, a year before George Eastman introduced roll film to the world, Countess Sophia Tolstoy purchased a Kodak large-format camera. Her purpose was to photograph her husband, the famous Russian novelist Leo Tolstoy, for posterity. She quickly mastered the camera, which shot individual 5×7-inch glass-plate negatives, and she began carrying it around with her in a special road basket. This was less than 50 years after the first daguerreotypes had been unveiled in Paris. Though the Kodak box camera would soon shift photography’s paradigm, Sophia’s equipment made taking pictures physically difficult and aesthetically insecure. Yet she was undaunted by that challenge.

Sophia had tried photography once before. Twenty-seven years earlier, at the age of 16, she had dabbled in the medium for a summer. It had been necessary then to use the messy wet-plate collodion process, which required the photographer to hand-coat a sheet of glass with light-sensitive liquid emulsion and expose it in the camera before it was dry. It wasn’t easy to get everything right. Sophia photographed her family and friends that summer, and while none of those pictures survives, it’s clear that something drew her to the medium long before she came up with her documentary mission.

When Sophia took up photography again in 1887, the factory-coated dry plate had come along; though this simplified the technique, she had to learn photography all over again. She developed her glass negatives under a dark attic staircase in the family house, then made contact prints on the terrace outside. After a long exposure to daylight caused the negative’s image to appear as a developed positive on the ‘printing out’ paper it was pressed against, Sophia would fix and wash the prints, then stick them onto a window. They fell off when they were dry.

Though Sophia was dedicated to photographing her husband, she soon became her own most enduring subject. She found a way to express herself directly in her self-portraits, looking inward, not only outward. When she took pictures, she was without her usual concern for the opinions of the scores of strong people in her life. She photographed herself unsentimentally, romantically, playfully, in clothes her husband detested, and in poses and compositions that were experimental and uninhibited for her day. She often included one or more other important people in her life, including husband Leo, in these images of herself.

Self-portraiture was common in painting and other visual arts in those years, but it was rare in photography. The reason was at least partly technical. Remote control was awkward, if not impossible, and having somebody nearby to expose the plate when the moment was right was inconvenient and inhibiting for most photographers.

This was not so for Sophia. She felt at ease with family and friends who were nearby while she was photographing, and she asked any who came along at the right time to make the exposure. She didn’t keep a record of who actually operated the camera for any given picture. It just wasn’t important to her.

Long before photographers regarded themselves as legitimate subjects, and the better part of a century before Nan Goldin would turn the medium into a personal diary, Sophia used self-portraiture to examine her own likeness, to explore her feelings about the life around her, and ultimately to investigate her identity as a wife, mother, and woman. She did these things with a light touch, though. She never considered herself a fine artist and wasn’t trying to make portraits that would penetrate the soul — hers or anybody else’s.

In contrast to the angst of modern self-portraiture, the world Sophia depicted in her self-portraits is untroubled and calm. Her solitary photographic moments aren’t lonely or dissatisfied. She is open, with a strong sense of self and a great capacity for intimacy. In the best of Sophia’s self-portraits she seems close to us; often she looks directly into the camera, as if surrendering herself to the viewer.

Self-portraiture had the mysterious ability to fulfill Sophia’s need for self-expression. But she also had a more practical reason for making self-portraits: to supply reference photographs to the various artists who wished to depict her in paint, clay, or bronze. In response to their requests she made pictures that reflected her own ideas about herself — and were sometimes better than the work of the artists she created them for.
One noteworthy example is a series of pictures that Sophia created by limiting development to certain areas of the printing paper. The partial revelations that resulted from this technique emphasize her eyes and profile. There is a purity, almost a girlishness in these images. She thought enough of them to frame them. Framing them signified her respect not only for the creative process but also for the very process of photography, and what it contributes to the final image. In this she was far, far ahead of her time.

Sophia didn’t caption her pictures very deeply. She usually identified the people in them but didn’t provide other details of the photographic occasion. She saved her feelings and opinions for her written diary. On its many pages she recorded the episodes of her married life from the beginning. When her photographs document events described in her diary, they are emotionally different than the written account. Sophia’s diary shows an unhappier mood than her photographs do. Yet the two together tell a well-rounded story of this remarkable and complex woman, who had 13 children, served her husband’s every literary, practical, and physical need, and still pursued a creative life of her own.

Sophia wasn’t the first socially privileged woman to take up photography as a serious pastime. Well-known amateur photographers such as Julia Margaret Cameron and Lady Clementina Hawarden had created significant bodies of work. Neither of these women undertook serious self-portraiture, however.

Lady Hawarden, like Sophia, portrayed family and friends in domestic settings, but her photographs are much more elaborately styled than Sophia’s. Sophia’s pictures are simpler and less formally perfect, and they are always more personal. This contributes to a feeling of realism in Sophia’s work.

Julia Margaret Cameron, unlike Sophia, was after beauty rather than truth. She created romantically styled portraits of famous acquaintances, as well as poetic allegories staged with her friends, their relatives, and their servants as actors. Sophia only staged her photographs to the extent that it suited her emotional purposes. But at the core she remained a documentarian and a diarist — mixing fact with her inner world.

Lady Clementina Hawarden and Julia Margaret Cameron were both considered amateurs in their day. It was only many years later that photographic history accorded them the status of artists. Perhaps the time has come to reconsider Sophia’s amateur standing. Her rare ability to combine a documentary approach with an unstudied intimacy, and the brilliance and persistence with which she pursued the photographic self-portrait, surely warrant her inclusion in the annals of this medium’s rich history.

–For the full story of Sophia Tolstoy’s life, her world, and her photography, see Leah Bendavid-Val’s book Song Without Words: The Photographs & Diaries of Countess Sophia Tolstoy (National Geographic, $35).