Miniatures photographer Adam Makarenko discusses the allure of the little. 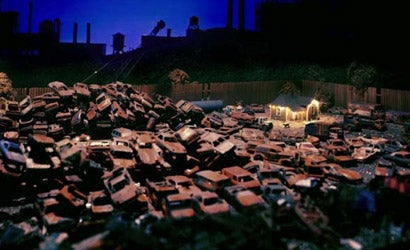 Every summer I take pictures of bees, drawn to their mysterious energy. When the bee season ended in 2006, I wondered what I was going to take pictures of if the bees were done producing honey for the year. I thought, “What if I created a miniature world of bees and apiaries?” This way I would be able to continue working with the idea of bees and elaborate on my idea of bees as mythical. Plus I could more easily create the narrative I had written about a man who discovers a lost world of bees.

My Miniature Apiary series felt limitless for me. I could do just about anything: make a mountain range, build a multitude of tiny hives, make bees that glow. There were no limits to my imagination; however, there were a few stumbling blocks as far as technique and skill were concerned. First I had to figure out how to how to actually make the miniatures. What materials should I use, I wondered. How do I make bees that glow from within? As I began to figure things out by trial and error, I wondered how others had done it before me.

The idea of the reconstructed photograph has been around for some time. I think my fascination with reconstructed scenery began as a child, while I wandered through the Museum of Man and Nature in Winnipeg, Manitoba Canada. The first thing you see when you walk into the museum is a large diorama of buffalo on the Great Plains being pursued by a native man on a horse. It is simultaneously ominous and breathtaking. So a few years ago when I discovered Gregory Crewdson’s Natural Wonder Series, which emulates the dioramic bird scenery found at the New York Museum of Natural History, I immediately thought back to my childhood fascination with those dioramas.

Crewdson lights his pictures like movie sets. There are highlighted backgrounds, key lights, and fill lights. This concept of setting up a scene in a cinematic way subconsciously planted a seed in my brain. I thought this was a great approach to photography. It had myriad art forms in one: Painting (the false backdrop was often painted), sculpture (the constructed scene), and, of course, photography (the finished image). I was fascinated with the idea that the three-dimensional image could be manipulated by altering anything within the scene. And there was something deeper in his work that spoke to me; I connected with the way Crewdson captures the light and his subjects. I was intrigued by the control he exerted over his images and the way he could express a vision so fantastically fraught with emotion. I liked the idea of using a photorealistic backdrop, with a physical three-dimensional scene in front of it. When my Miniature Apiary series started, these ideas were already in my mental file folder.

Much later on, when I had already been working on my series, I found a photo book by Thomas Demand. When I first glanced through it, I thought the images looked real, but as I went on I realized that he had painstakingly constructed everything out of paper. The scenes that he creates are life size, recreated from memory or pictures. I was fascinated by the meticulous nature of his work — especially an elaborate jungle scene that he had created out of paper. In his print called “Clearing,” the light travels through the leaves in such a way that you would think you were looking at a still image from the BBC Planet Earth series.

Inspired by his work, I went home and attempted to make tiny leaves one by one for a scene with my twelve-inch beekeepers. Several hours later, as my hands cramped up, I realized the amount of work that went into making miniature leaves. To cover an entire tree, one foot high, would take me several weeks. This seemed impossible, and unrealistic. I put that idea on the back burner and continually wondered how Demand did it.

Unfortunately, there are no how-to books on specific miniature work. There are general books that deal with train scenery modeling, but they are not going to tell you how to make a bee. Therefore, a huge part of my work is experimentation.

While working away at my miniature photography, I was still relatively unaware of other miniature photographers until a friend forwarded me the website of Lori Nix. Nix’s interests lie in “faux” landscapes that she makes in miniature form. Her work is driven by a narrative, much like my own, and her pictures are colorful and dynamic. In her Accidentally Kansas series she re-creates scenes from her youth, events that shaped her life, and things that she has witnessed. I felt a connection to her work, and I was compelled to contact her.

I think one of the first conversations I ever had with Nix was about scale size. There are numerous scale sizes, ranging from the very small (Z-scale 1: 220) to the larger scale of 1:24 G-Scale (German Scale). I made my miniatures in varying sizes, starting out with HO scale, which is 1:87, meaning a human figure would be three-fourths of an inch high. This is a common train hobbyist size, which is very small, and also very affordable. When I told Nix about my small scale sizes, so they fit on my desk, she thought I was crazy. She works in a much larger scale for her miniatures, and her sets can be as large as six feet wide and four feet high. Often she bases her scales around the objects contained within the picture; in her picture titled “Majestic” there is a miniature piano, which dictated the scale.

Larger scale sets are easier to work with because they can provide more detail, but they are harder to manipulate afterwards. I chose to work in a smaller scale for a number of reasons, and became obsessed with how small I could make things. What I discovered about making the sets small was that it allowed for more expansive scenery, and the perspective can be forced more easily. In other words, the set doesn’t have to be twelve feet long; it can be twelve inches long and still represent the same idea. I also like to use moody lighting, which hides the details that may be lost at a smaller scale.

Nix has been a great confirmation on the miniature path for me because I am able to share my ideas, concerns, and aspirations with her. She has been at it a lot longer that myself, and in a sense has become a long distance mentor.

I also realized on the Miniature Apiary series that making most of the miniature objects from scratch made the work look more believable and sincere. You can buy prefabricated miniature houses, people, and animals, but they look plasticky and manufactured. By making my own hives and bees, I created greater depth and feel in artistic terms.

When discussing my work with Saul Gallery in NY, they told me it was a cross between Sarah Ann Johnson’s, and Didier Massard’s. I found Johnson’s concepts of mixing reality with her miniatures a parallel to my own experience with bees. She spent several years planting trees in Northern Canada, and taking documentary style photographs of her co-workers. When she was done, she re-created scenes from her tree-planting days in miniature form. The re-created scenes are informal and dreamlike, but her set-ups can be very elaborate. For her gallery shows, she juxtaposes the real photographs with the miniature photographs until they blend into one.

Massard was new to me, so I checked out his website — I was blown away. The photorealism of his miniatures was accurate and detailed. It was the most realistic that I had seen in the miniature world: miniature trees and mountains with exceptional detail. Talking with Massard I learned that a single picture can take him several months to create. I may spend two weeks on mine. I also learned that he often sketches out a scene first, which is how I create most of my miniature bee images. The sketch has to stay in the book for a while before it comes to life in any concrete way. If the sketch is no good, then the three-dimensional model won’t be either. The sketch is a precursor to the actual work, and it has helped me a great deal. It was interesting to hear that Massard does the same.

While surfing through Massard’s website I found a behind-the-scene look into his work, and that is where I finally discovered how to make tiny leaves. I saw that he was punching them out of a tiny little device. I have since found a leaf punch at a hobby store, and I am punching away making leaves.

I am also building fully articulating armature models that can be manipulated with greater precision. But these new models require more work, time, and money — inevitably there will be more trial and error. In the future I plan to bring it all to life with a stop motion animation film based on my narrative of a man who finds the lost world of bees in a mythical valley called the Langstroth Range.

Diving headlong into the miniature world has been a great challenge, but it has also been full of rewards. If I imagined that I was on a long and windy road with no directions, coming into contact with these other photographer’s has given me inspiration to keep heading along that road. I feel we are all guided by the same artistic forces, and much of our ideas and concepts parallel one another. Many times when I discover a technique of a fellow miniature photographer, there is an uncanny connection when I realize that I have already done the same on my own.