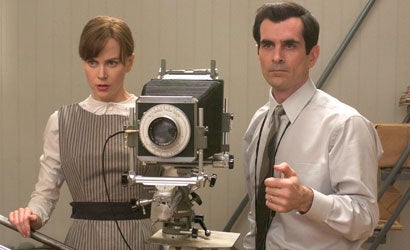 When Steven Shainberg was asked to direct a Diane Arbus movie that had been kicking around Hollywood since the ’80s, he had already been trying for more than 15 years to get the rights to the Patricia Bosworth biography it was based on. Shainberg, whose father and uncle knew Arbus through her lover Marvin Israel and had contributed information to Bosworth’s bio, grew up surrounded by Arbus prints and says she is the “only real person” he’s ever wanted to make a movie about. An interesting sentiment, considering his Arbus movie is mostly fiction.

Focusing on an invented relationship, Fur: An Imaginary Portrait of Diane Arbus (opening Nov. 10) tries to imagine the artistic transformation Arbus underwent during three months in 1958 — between the night she announced she would quit working with her husband in their fashion studio and the day three months later when she emerged to take the first “Diane Arbus photo.”

American Photo: What drew you to Diane Arbus as the subject of a movie?

Steven Shainberg: Most people have a strong response to Arbus one way or the other. From a photographic point of view, the question of what is going on in the photographs always fascinated me. What is going on between the subject and photographer that gives her work such power? The film in some sense proposes an answer to that question. There is a fundamental exchange between her and the subject that is deep and mysterious, and that is what I would hope a film would be.

After Secretary [2002], I wanted to do something I really cared about and something that felt very personal and vital. This was probably the only real person I’ve ever thought of making a movie about. Arbus was one of the four or five most important artists to me as people who had influenced my own way of thinking. To be 7, 8, 9 years old, rummaging around in your kitchen drawer and to find a picture of the “Jewish Giant,” like I did … it’s a formative moment. Later on in life I read most of what has ever been written about Arbus and had my own personal response to those things … which was really deep and kind of crucial for me.

AP: Tell me about your decision to fictionalize the Diane Arbus story.

SS: I am not personally interested in biopics. I think that the slavish literalism actually tends to not convey to the audience who the person was in their spirit. I was much more interested in trying to discover what was going on inside Arbus than what was going on outside Arbus. In order to do that, my basic thinking was that a leap into metaphor was the most expressive and artful way to go at her. When she would go in and take a picture of somebody, she would take the “Arbus” picture … in the case of this film, I’m taking my picture of Arbus — it’s really the only way I know how to do it. I know how to make a movie that expresses how I feel about her and how I see what was going on. The approach is definitely unique … but in the end, I think you feel and connect with who Arbus was more. I was trying to truly make you experience what might have been happening insider her for a three month period in her life.

AP: Did you incorporate any of Arbus’ original photos into the movie?

SS: A lot of the other [proposed film adaptations of Bosworth’s biography] attempted to do that … this movie does not. It’s about the taking of the first, imagined, Diane Arbus photograph. My problem with biopics is that you already know most of the movie before you go in. The audience is so far ahead of the narrative that you really feel like you’re watching a scrapbook animated. It was never my intention to make a film that dealt with the Diane Arbus that you know. The movie is a kind of prequel to the Arbus you know.

AP: How did you and Nicole Kidman [who plays Arbus] work to prepare her for the role? Did you put her behind a camera or have her go out and photograph strangers?

SS: She did say to me, should I get tapes of Diane talking, should I see a motion picture of her. I told her, don’t look at anything. I didn’t want her “doing” Arbus. I find those kinds of performances to be self-conscious and silly. It wasn’t important for me that she imitate a Diane Arbus that we might have snippets of information on. It was more important that we try to convey through Nicole herself what this person might have been going through during this short period of time. So that just requires her to be truthful. It’s a very unadorned, bare, stripped-down performance for her.

We got her the Rollieflex that Diane used, and she worked with a photographer in Australia … so when you see her in the film, she feels like someone who moves elegantly with the camera and is used to having that particular camera with her.