Until astronauts reach Mars, the best glimpse of the red planet will come from NASA's "rovers" and the scientists who control the robotic cameras. 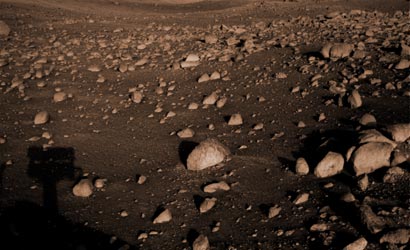 When Jim Bell was young his parents bought him a nice Pentax SLR. When he was in high school he joined the photography club. He loved to take pictures of landscapes and liked the technical aspects of being in a darkroom.

“I kept up with it as a hobby,” says Bell, now an associate professor in the Cornell University Astronomy Department. “I never imagined I would have a chance to practice that hobby on another planet.”

Bell, who refuses to classify himself as anything but an amateur photographer, will release his first photography book Nov. 16, titled Postcards from Mars (Dutton, $50).

The book includes more than 150 photographs taken of the surface of Mars by the two rovers sent up in January 2004, which are still transmitting photos back to earth despite their projected lifespan of only six months. The Cornell team Bell leads is in charge of the Pancam color cameras on each rover.

Each of the two robot rovers — Spirit and Opportunity — is equipped with two color and seven black-and-white digital cameras. Cutting edge technology when the project was developed about 10 years ago, the Pancam cameras now seem a little outdated. They are 1 megapixel cameras with approximately 100 dpi resolution at a distance of one meter (a calculation Bell carried out while we chatted on the phone). They have a fixed focus and are set at f/20 for a wide depth of field. For each color photograph the Pancam produces, three identical photos must be taken, one each in red, yellow, and blue, which are reassembled back on earth, a process that is done instantaneously by off-the-shelf digital cameras.

Despite these restrictions, the quality and volume of photos coming back from Spirit and Opportunity far exceeds anything that has come back from Mars before.

“The analogy is getting a better camera,” Bell explains. “In a sense we had a bigger flash memory card.”

So the rovers can take bigger and better pictures than ever before, but on previous trips there would have been no way to transmit such large files the incredible distance back to earth, and the trip would have degraded them nearly to the point of uselessness. Now NASA has a kind of “Mars armada,” including orbiters around the planet that act as communication satellites for the rovers. These orbiters are designed specifically to relay large amounts of information back to earth, so the “pipeline” for photo files to flow through is much larger than ever before.

To compensate for the relatively low resolution of the rovers’ cameras, the photography team creates images by taking many tiny photos and stitching them together on earth with software similar to consumer stitching programs. This means that many of the photos in Postcards from Mars are incredibly detailed panoramas. One took nearly five months to capture, with the upper left corner taken in April and the lower right in September.

Teams around the world control different parts of the rover, so the already complicated process of taking photos of Mars has become a tactical maneuver done with military precision. The Cornell team starts each day by reviewing the previous day’s movements and findings. Then they meet with scientists worldwide who control different aspects of the rovers and together they decide what to have the rover do for that day. Should they drive forward, should they put the arm down and test something — or should they take a photo? Everything has to be carefully weighed, the resources it will use versus its potential scientific benefit, and then a detailed plan for that day’s instructions is agreed on. At the end of the day, each team sends in the code for their part of the rover, which is translated into “rover language” in Pasadena and radioed up to the sleeping rovers. When the rover “wakes up” (the solar-powered robots only run during daylight hours) it performs its routine for that day.

In all of this maneuvering, photographs serve a very utilitarian purpose, not simply an aesthetic one. Putting down the rover’s arm, for instance, takes several days and eats up lots of resources.

“We have to use the pictures to select those areas very carefully,” Bell explains. And then sometimes a scene is so compelling, they just have to take some pictures. Occasionally the Cornell team even has the luxury of widening the Pancam view enough to show part of the rover’s solar panel to provide some scale for the beautiful photos in his book. “We are giving the public back something that is not just scientific, but that is beautiful and emotional,” Bell says. “Exploration sometimes just means stopping to look around.”

One of the most important discoveries made by these robotic explorers is that Mars was once covered by water. This theory is now widely accepted, in no small part because of photos from the rovers, which show patterns distinctive to shallow waves and mineral formations (dubbed “blueberries”) that result from slow evaporation of water.

In the spirit of scientific sharing, every photo that reaches Earth (about 150,000 so far) goes out to the Internet almost immediately, at full resolution, at marswatch.astro.cornell.edu/pancam_instrument/. Favorite stitched and colorized photos also can be seen at marswatch.astro.cornell.edu/mars_as_art.html. Bell admits this makes his team more likely to be scooped by other scientists using their images (which has happened), but he’s okay with that. “There are dozens of kids and teachers and enthusiasts who are just enjoying the pictures,” he says. “So I think it’s worth it.”

And because he’s “a book person,” Bell has decided to also provide those pictures to the public in the form of Postcards from Mars. “At least for myself, seeing a picture on a computer screen wouldn’t do it,” he says. “The book represents the biggest way that I could figure out to share these images in a tactile way.”

Understandably protective of his images, Bell admits he was a “thorn in the side” of publisher Dutton because he insisted on being in the loop for every step of the book’s color processing and printing. Some photos are printed in “false color,” noted in the captions, where infrared or ultraviolet filters were used. But for the images that are in natural color, Bell was meticulous about being true to life. Each rover carries a calibration target (which doubles as a sun dial) that the team photographed on earth and photographs before each Mars picture to check that the colors are correct.

Bell says he was so careful about this, and about making sure the stitched photos were seamless, because he “wanted to give people who are looking at the image a real sense of being there.” He wants someone looking through the book to see Mars “just like astronauts will when they go.”