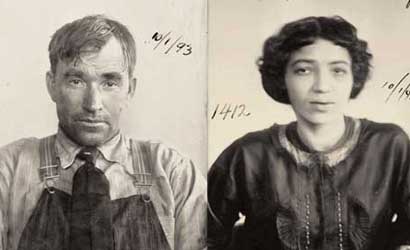 mug n. 1. The face of a person 2. The area of the mouth, chin, and jaw. 3. A photograph of the face, esp. one used by police for identification. 4. A grimace. 5. A thug; hoodlum. v. -tr. 1. To photograph a person’s face for police files. 2. To waylay and beat severely, usually with intent to rob. -intr. To grimace, esp. to make exaggerated facial expressions. -American Heritage Dictionary

Not counting pictures of baby Suri, mugshots seem to be the grail of celebrity photography — a smiling Mel Gibson after his antisemitic tantrum, a rumpled Robert Downey Jr. redux — and also proof that society has its man, whether Warren Jeffs or John Mark Karr. It’s an irony of our medium’s lingua franca status, and perhaps a reflection of its devaluation by a picture-saturated world, that these portraits are made by uncredited cops rather than pop-culture stylists or paparazzi. More ironic is that the preponderance of mugshots depict ordinary people who are, if guilty as booked, entirely petty in their criminality. The mugshot is, after all, a utilitarian document — an image “meant to be destroyed when obsolete,” according to New York gallery owner Steven Kasher.

Given the way the curatorial world strives to find value in such unwanted artifacts, it’s no surprise that Kasher has assembled “Least Wanted: A Century of American Mugshots.” Opening Sept. 14 at his Manhattan gallery, his intriguing show features over 200 examples of this most artless form of portraiture, all collected by veteran New York City art director Mark Michaelson. Michaelson and Kasher have teamed up with Steidl to design and edit a book by the same name, to be published concurrently with the show. “The selection demonstrates that mugshots, taken under duress, can be as full of truth and beauty as other, more cooperative masterpieces of studio portraiture,” says Kasher, whose list of artists ranges from Disfarmer to David LaChapelle and officially includes “Anonymous.”

Faced with a challenge to their being that few portrait photographers could hope to recreate in the studio, the subjects of these images — most shown front and side, many marked by the customary booking numbers, and some whose fingerprints are still attached — respond with expressions that range from dazed to defiant. Some of the images even come with colorful ledger entries: “Susp. is hooked steals to feed her habit,” for example. Even without such accusations mugshots automatically indict their subjects in most peoples’ minds, yet that prejudgment is often at odds with the dressy clothes, stylish hair, and benign affect of these sitters. (A few are shown with bloody bandages wrapped around their heads, but many more have their hats in place.) Given that most of the images have long since lost their original context, the viewer — on second thought — really doesn’t know what these people are charged with, let alone guilty of. And that realization creates a certain sympathy. Visit this show or buy the book and you may feel differently the next time you see a celebrity, or a pedophile, in a mugshot.