For Journalists, Iraq War is a Deadly ‘Disease’

No matter how you add it up, more journalists have died while covering the Iraq war than those in WWII, Korea and Vietnam. 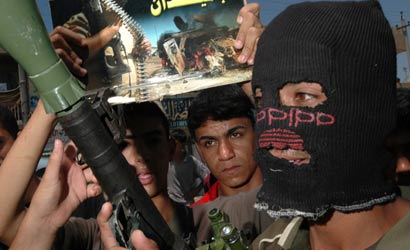 In the past three years, a lot of photographers who have worked in Iraq have told their stories to American Photo. So all of us here knew perfectly well what a dangerous place it is for journalists.

Still, it was an eye-opener to learn that the war in Iraq is now officially the most deadly conflict for journalists in the last century.

It earned that distinction on May 29, when James Brolan and Paul Douglas were killed by a roadside bomb in central Baghdad. Brolan, a CBS soundman, and Douglas, a cameraman, were embedded with the 4th Brigade Combat Team of the U.S. Army’s 4th Infantry Division when a car packed with explosives detonated near the Humvee in which they were riding. Douglas was 48 and Brolan 42.

The two journalists, along with network correspondent Kimberly Dozier, were all wearing protective gear. Nonetheless, the explosion killed the two men immediately and severely wounded Dozier, who was later taken to Germany for treatment.

Brolan and Douglas became the 70th and 71st journalists killed since the beginning of the Iraq war, according to Freedom Forum. The Committee to Protect Journalists also lists 26 members of media support staff in its count of journalists killed in the war. No matter how you add it up, though, the numbers of dead exceed the 69 killed in World War II, the 17 killed in Korea, and the 63 killed in Vietnam.

Vietnam was a terribly dangerous place for journalists — especially photographers. The war took the lives of some of the finest photojournalists of a generation: Larry Burrows, Gilles Caron, Bernard Fall, Henri Huet, Oliver Noonan, and Dana Stone, among them. It was a war in which journalists had extraordinary freedom of movement and access to battles. That access, uniquely free from military oversight, resulted in some of the fiercest war photography ever produced. Robert Capa famously said that if you’re pictures aren’t good enough, it’s because you’re not close enough. But Capa was killed covering the conflict in Indochina in 1954.

The same need to get close has driven journalists in Iraq, of course. In the aftermath of the deaths of the two CBS journalists, I read a newspaper story quoting Arnold Amber, the president of the Canadian Journalists for Free Expression, who said simply that journalists will always feel the need to “be on the ground.”

“To see what’s happening, you have to be there,” he said.

|| |—| | | | © Rita Leistner/Redux Journalists photograph a fallen statue of Saddam under which Iraqis have set a fire. | The truth is that Iraq has presented journalists with unique problems since the war began. To cover the invasion in 2003, most major news outlets embraced the Pentagon’s “embed” program, exchanging journalistic independence for access to the front lines.

At the time, it seemed like a good deal for many of the reporters and photographers who strapped on body armor to cover the global war against terrorism. From the fireworks of shock and awe to the Top Gun photo op of the president’s “Mission Accomplished” fly-in aboard the USS Abraham Lincoln, Iraq became a made-for-TV war shown in real time. You really did have to be there.

Since those early days, though, many journalists have begun to wonder if the media paid too high a price for its video footage and photographs of the fighting. As Iraq started to look more and more like a quagmire, it wasn’t just American war planners who lost credibility; Western journalists did too. And as post-invasion Iraq descended into violence, the real story of the war became ever harder to tell.

The war produced no iconic images until the pictures of prisoner abuse at Abu Ghraib prison emerged. And those pictures were made not by journalists but by the soldiers who were doing the abusing.

Now in its third year, the war has a very different look on American TV and in newspapers. The Bush administration, which once partnered with the media to get enthusiastic coverage of the invasion, now calls on journalists to present a more fair and balanced picture of Iraq. Americans, the president says, aren’t being shown the success stories resulting from our nation-building effort because the media is too focused on military firefights and civilian bombing. Visual drama was good for the administration when news photographers rode on armored personnel carriers with GIs during the invasion, but bad when the subject became soldiers and civilians killed by improvised explosive devices.

Ironically, the CBS crew that came under attack in Baghdad was working on a story about what American troops were doing on Memorial Day. That’s just the kind of story the administration says the media should be doing more of.

It isn’t only bullets and bombs that hinder the work of journalists in Iraq. According to the Committee to Protect Journalists, at least 42 journalists have been kidnapped.

Amy Cooper, a representative of the CPJ, told the New York Times: “We talk to veteran war correspondents who have covered everything going back to Vietnam and through Bosnia. Even those who have seen a number of different wars say they have never seen something like this conflict.”

By happenstance, a few days after the news of the deaths of the CBS journalists, I found myself speaking to a famed war photographer, Patrick Chauvel, who dropped by the American Photo offices. Chauvel has covered everything from the Vietnam War to the conflict in Northern Ireland, the invasion of Panama, and the fighting Chechnya, and he has been seriously wounded on several occasions. He’s also spent some time in Iraq, so I asked him what it was about the war that made it so dangerous for journalists.

He said reporters and photographers there simply can’t exercise the kind of judgment they did in places like Vietnam. “For instance, if you were experienced, you knew which drivers to choose, the ones who weren’t going to get you into a bad spot,” he said. “But Iraq isn’t like that. There’s no front line, the violence is totally unpredictable, and there’s no place to get away from the danger and just blow off steam. You can lose your edge. The war is all around you everywhere.”

“In fact, Iraq isn’t a war at all,” Chauvel told me. “It’s a disease. It’s something you catch, like the flu.” This disease is deadly.

David Schonauer is editor in chief of American Photo. To respond to this article, e-mail us at editor@popphoto.com. E-mails may be quoted by name unless the writer stipulates otherwise.