The Drilling and the Damage Done

Photojournalist Ed Kashi's saga of injustice, devastation, and violence in the oil-rich but cash-poor Niger Delta. 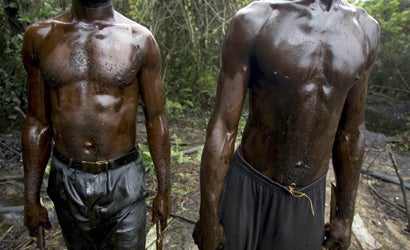 In his 25-year career, photojournalist Ed Kashi has taken on many different kinds of stories with sociopolitical ramifications, from the plight of the Iraqi Kurds to the aging of the American population to the aftermath of Hurricane Katrina. But he says what he witnessed while covering the oil conflict in the Niger Delta is particularly disturbing.

“Doing this work you see a lot of things — but some places you see, like Nigeria, make you want to explode,” says Kashi, whose photographs of the Niger Delta region appear in a 30-page feature of National Geographic’s February issue, as well as an audio-video blog. “You see how screwed up the world is, and how badly people can treat one another.”

The photo-essay, “Curse of the Black Gold: Hope and Betrayal in the Niger Delta,” documents the conditions in the oil-rich wetlands in the delta region of Nigeria, Africa’s most populous country. It is a story steeped in irony: An industry built around a natural resource (Bonny Light crude oil) that was once seen as an economic savior has become an environmental and political disaster, its profits siphoned off by corrupt government officials while the nation’s poverty deepens. And in recent years, the conflict between the haves (the oil industry and the government) and the have-nots (virtually everyone else) has burgeoned into a violent struggle — with insurgents taking up arms to disrupt oil operations — that threatens the nation’s stability as well as the world’s crude-oil supply. As reporter Tom O’Neill writes in Geographic: “Oil taints the ambitions of the young, who will try anything to scoop up a share of the liquid riches — fire a gun, sabotage a pipeline, kidnap a foreigner.”

Among the subjects of Kashi’s photographs are hooded members of MEND (Movement for the Emancipation of the Niger Delta), an organized resistance force that has been systematically staging attacks on oil platforms and pumping stations, disrupting the daily shipment of nearly 500,000 oil barrels. In Kashi’s blog, he streams audio of one of the rebels describing their mission: “MEND is an idea that has come to stay,” the activist says. “It’s believed that Ken Saro Wiwa [a pacifistic activist, 1941-1995] organized the most peaceful grass-roots mobilization in the Niger Delta. He was killed. Now we will not protest peacefully again! We must…take up arms against the oil companies and the federal government.”

According to Kashi, the violence and industry disruption in the delta can be directly linked to recent spikes in oil prices globally. “Nigeria is part of OPEC,” Kashi says. “When MEND shuts down 25 percent of the region’s output, you see crude-oil prices go up. The oil companies charge consumers more and pay the Nigerian government more. MEND is also bunkering [stealing crude oil] just like people in the military and the government. The rebels use the money to acquire more weaponry. And the violence continues. It’s a nightmare to be there — no matter how rich or poor you are.”

Many of Kashi’s pictures are of the poor ones, villagers crowded in shantytowns, fishermen and meat workers in environments polluted by oil spills, kids in neglected and near-empty schools. “With many of these people, there’s a sense of futility, a feeling that their lives will never get better,” Kashi says. “But my answer is, as long as this injustice continues, we must continue to shed light on it.”

Such a mission can be fraught with danger. In the summer of 2006, Kashi, along with his local “fixer” (guide/assistant), was arrested at gunpoint by a Nigerian naval task force, apparently for photographing an oil facility from the river without permission. The two men were held and interrogated for three harrowing days before the authorities released them. “People in the local human rights movement had been working for our release,” Kashi says. “Had it not been for their efforts, and those of others, I’m convinced the situation would have lasted a lot longer and been a lot uglier.” At one point, Kashi thought he might face death. “The most frightening thing about the experience is once they have you they can do what they want with you,” he says. “This is the part that constantly haunted me while I was being held – the not knowing. They did let me go, but I was detained because the government sees me as a threat there.”

Kashi, in turn, is no fan of the Nigerian government. “When I first went over there I figured the oil companies were the main problem,” he recalls, “but in reality, the problem is the government of Nigeria, the incredibly corrupt people in charge. At all levels. It’s a culture of corruption.”

The Geographic article, however, also documents the environmental havoc wreaked by the oil industry in the region, the global distribution of the delta’s crude oil (40 percent of it going to the United States), and the country’s low standard of living (with most Nigerians living on less than a dollar a day). Kashi and writer O’Neill were not able to get access to any government officials; nor did officials from Shell, ExxonMobil, or other oil companies that work in the region answer requests for interviews.

“I do have a lot more material, both photographic and audio, and I’d like to address the situation in more depth and detail,” says Kashi, who has made four extended trips to the delta. He hopes to create an online “flipbook” of the Nigerian story (much as he did with his work on Iraqi Kurdistan on the Mediastorm Website). He is also working on a photo book about the Niger Delta, on which he plans to collaborate with Africa scholar Michael Watts, who first brought the story to Kashi’s attention.

“Right now, as we speak, we are burning Nigerian oil,” Kashi says. “We are compelled to know what is going on there. This situation is unsustainable. If Nigeria falls apart — the most populous country in Africa — not only will the oil supply be disrupted, but there will be even bigger social and political ramifications. I’m of the belief that everything is connected. So by addressing this injustice, maybe that will help the overall picture improve. That may be naive, but what is the alternative?”

Kashi chuckles and says he doesn’t want to sound like a preacher. “But the world doesn’t need a bunch of nice pictures. The world needs stories that tell people what is going on,” he adds. “Our work is never done.”