Dispatch from a Lost Valley

Russian nature photographer Igor Spilenok describes the burley nature of one of the great wonders of the world, now gone forever. 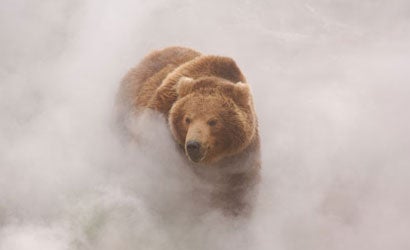 If you’ve ever seen pictures of the Valley of the Geysers in Russia, you know why it was considered one of the most beautiful places on earth. Now the valley, located in the Kamchatka Peninsula, of far eastern Russian, is gone.

The Valley, one of the few places on earth where geysers occur naturally, along with Yellowstone National Park and sites in Chile, Iceland, and New Zealand, was buried by a landslide after an entire mountain collapsed, probably following an earthquake, according to the World Wildlife Fund.

Igor Spilenok knows the Kamchatka well. One of Russia’s best-known nature photographers. Spilenok is considered a hero in the environmental movement, having spent most of his career photographing and lobbying to save the Bryansk Forest in western Russia. His work there also made him the target of death threats from poachers and loggers.

For the past several years he has been shooting in the Kamchatka Peninsula. In this dispatch, written for American Photo shortly before the landslide that buried the Valley of the Geysers, he describes the burley beauty that sets the Kamchatka apart from other landscapes. In light of the recent news about the Valley of the Geysers, his text is heartbreaking. — David Schonauer

Kamchatka is Russia’s final frontier, a land of big bears, large salmon resources, and fiery volcanoes. Now I am in its heart — the Kronotsky Nature Reserve, one of the zapovedniks in Russia’s expansive system of 101 strictly protected areas. I arrive, as do all staff and visitors, by helicopter, following an hour-and-a-half ride skimming the mountaintops from Petropavlovsk, Kamchatka’s capital and only sizable city. My vehicle is a Russian cargo helicopter, which has been brightly painted blue and orange to conceal its age.

Kronotsky Reserve is accessible only in good weather, June through September. I am here in mid-June, in time to see the Valley of the Geysers come to life. In late April and May, the nearly two-dozen large geysers, hundreds of steaming thermal springs, and boiling mud-pots in this valley melted off the deep blanket of snow. Even now, snow covers the mountains surrounding the valley, but green shoots and spring blossoms are visible in the steamy valley below. Brown bears gather here in force in springtime. For the bears, it provides an early respite from Kamchatka’s long winter. Green grasses attract the bears from other parts of the Reserve where the snow will remain until summer. Females treat their young cubs to fresh vegetation, and males woo other females to begin the mating cycle anew.

I glimpse a mother bear leading two cubs across the opposite slope of the valley. I have crossed paths with dozens of bears here in my two years working as a volunteer in the Valley of the Geysers — one of the major attractions of Kamchatka and the section of Kronotsky Nature Reserve I help to protect. In summer, when dozens of tourists are flown into the Valley each day for brief excursions, I serve as a buffer between them and the bears. While my job is to protect the bears and their habitat from human pressures, more often than not I end up protecting the people from the bears.

The Kamchatka brown bear is the second largest in the world, after the Alaskan Kodiak bear, but the Russian population is not as well managed. Poaching, poor monitoring, and insufficient capacity for enforcing protected areas threaten the population, which hovers around 10,000. In addition, over-fishing threatens the local salmon population, which is the bears’ main food source. One-quarter of all wild Pacific salmon come from Kamchatka, meaning that depletion of Kamchatka’s fish resources could have consequences for more than Kamchatka’s bears.

Volcanic mountains and geysers dominate the valley’s landscape. Yet the geysers were not discovered until April 1941. Russian hydrologist Tatiana Ustinova and her Itelmen guide Anisifor Krupenin were exploring the unmapped interior of Russia’s Kamchatka Peninsula, where a federal nature preserve had been created seven years earlier. As storm clouds gathered, they briefly stopped to rest in a narrow canyon before returning to camp. Suddenly, they were sprayed with hot water bursting from an opening in the snow across the stream. They had discovered the first geyser on Kamchatka, and indeed in all of Russia. Subsequent expeditions found more than 20 large geysers and other unique natural phenomena, such as bubbling mud-pots. The seven-kilometer-square area now known as the Valley of the Geysers was declared a World Heritage Site by UNESCO in 1996.

Some of the geysers emit steam constantly. Others, like the one Ustinova first encountered, erupt periodically, showering the landscape and unwary visitors with hot, sulfuric water. The steam is framed by steep hillsides and an azure sky. The bears and I have found a beautiful, wild place. We hope it will remain so. With my pictures, I hope to show the world the beauty of this bear filled valley and evoke in them the desire to conserve it.