Rural Iowa is slowly dying, and Danny Wilcox Frazier is documenting its demise. 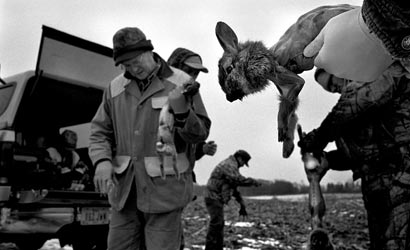 They’re all holding dead rabbits. Steam escapes their nostrils like angry cartoon bulls as they stand on the black, frozen ground, spotted with a few patches of snow. They’re alone in a field, accessible only by one of rural Iowa’s so-innumerable-they’re-all-isolated back roads. And they’re holding rabbits. Dead rabbits — skinned except for the fur on their faces and feet.

But this is normal in Iowa. It’s everyday life in the rural Midwest for hunters to skin rabbits together in a field, for people to drive tractors through town, for kids to attend farm-safety camp or for a child to go deer hunting with his eight siblings. The only thing unusual about this rabbit scene is that someone is photographing it.

That someone is Danny Wilcox Frazier. Frazier’s powerful black-and-white photos have documented rural Iowa — and its demise — in stark detail. “Ultimately, many rural communities across the Midwest will die,” he writes in the prologue to his first book, Driftless: Photographs from Iowa, to be published this fall. “In some ways the pictures I have made simply document the process.”

When Frazier, who now teaches photojournalism at the University of Iowa, started this project a few years ago — at the time nothing more than an idea and a class assignment — his subject was A.J., a student at Clear Creek-Amana High School in Tiffin, Iowa. After graduation, A.J. wanted to become a farmer — but he was the only person in his class who wanted to take up the profession most closely associated with his state. In Iowa, taking over the family farm is akin to legacy firefighters and police officers: it’s almost more surprising when children don’t follow in their parents’ footsteps than when they do.

But A.J.’s experience is just one in the widespread trend that Frazier calls the “brain drain”: native Iowans fleeing the state at their first opportunity — either after high school or college — to pursue opportunities in urban areas that they couldn’t find in the Midwest. This mass exodus, combined with the rapidly increasing population of people over 65 (the population over 65 will increase by 142,000 to more than 578,000 by 2010 — a significant amount for a state of only 3 million people), has left a gaping hole in the state’s workforce and tax base — which is, in turn, leaving a gaping hole in its soul.

“The feeling of openness that so defines the Midwest’s rural landscape is being replaced by one of emptiness,” Frazier says. “As the economies of rural communities across America continue to fail, abandonment is becoming commonplace; these photographs document the human effect of this economic shift. What I hope they do is force people to think about the decline of these rural places and start thinking of solutions. And I think the biggest solution is immigration.”

While documenting life in rural Iowa, Frazier has frequently found immigrants as his subjects: in the meatpacking plants in Columbus Junction and in the schools in West Liberty, in Kalona and in Conesville, in Washington and in Postville. To Frazier, the anti-immigration debate in the U.S. is nothing more than political kowtowing. The argument that immigrants take American jobs is a complete farce, he says, and people are missing the real issue: immigration is probably the only thing that can save small-town America. “People always say that something has to be done because they’re taking our jobs,” he says. “But that’s completely misguided; we’re keeping people out who just want to come here and make a living — often doing jobs we don’t want anyway. And they’re filling the void left by the old people who are retiring and the young people who are fleeing. Without immigration, small, rural towns will inevitably die out.”

As a native Iowan — he grew up in Le Claire, a tiny town on the Mississippi River — Frazier’s passion for, and personal stake in, his photos and his subjects is crystal clear. This passion was recognized when he was awarded the 2006 Center for Documentary Studies/Honickman First Book Prize in Photography, the prize for which is $3,000 and the publishing of his first book, Driftless. Frazier was chosen from a pool of 400 entries by the judge, legendary photographer Robert Frank, for his, as Frank put it, “passionate photographs without sentimentality… his work reaches out: Let me tell your story; it is important.”

Having Frank as the judge was especially important because, Frazier says, Frank was the biggest reason he got into photography in the first place. “In my first photo class in college, they showed all of [Frank’s photo essay] The Americans — on big, blown-up slides, they showed us the entire book,” he says. “And I was blown away by it. Not necessarily because I understood it, but because I had lived it — it was my world. I really connected to it because it was photos of the world I lived in. And I was completely hooked.”