A wildlife camera, placed by an Antarctic research team, quickly became an object of fascination for a group of Emperor penguins. 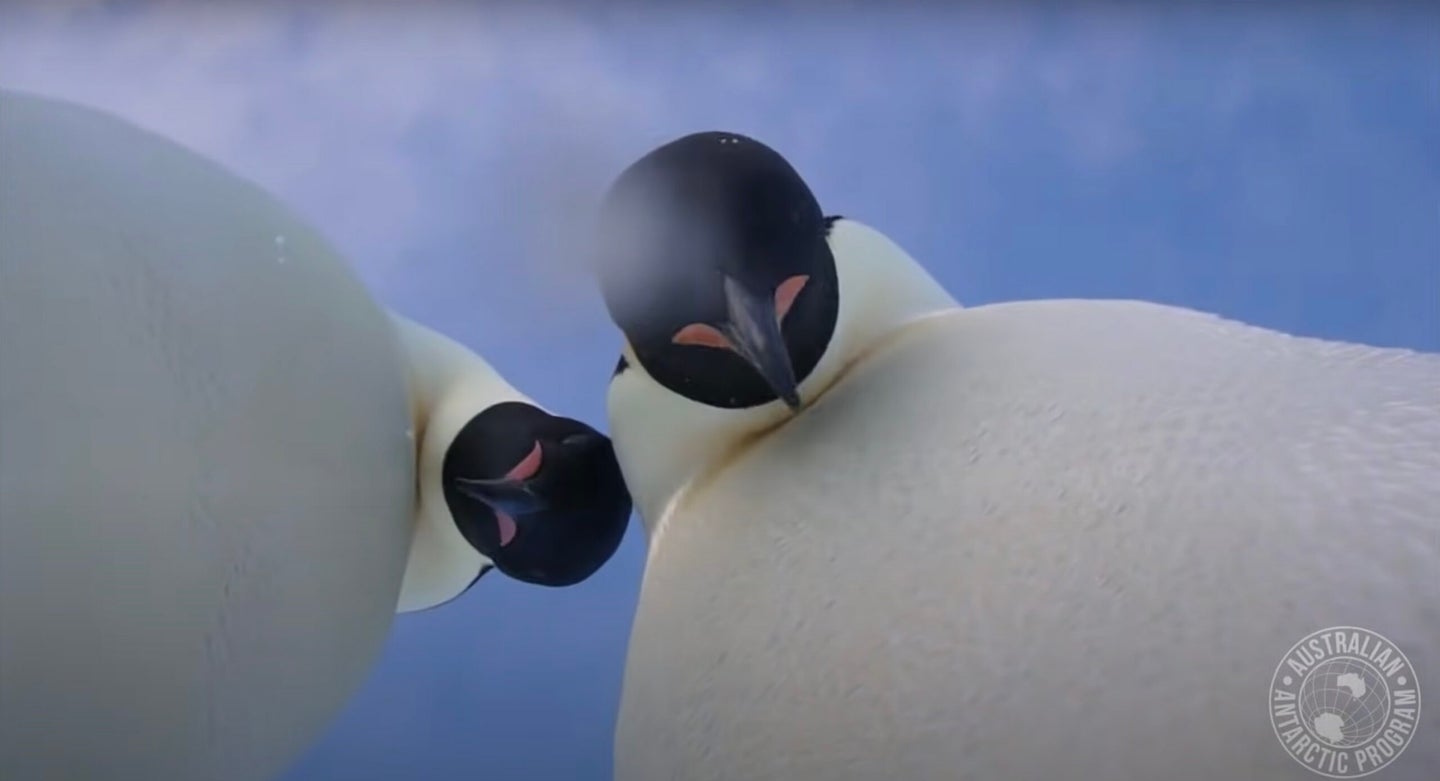 Researchers from the Australian Antarctic Program recently made a delightful discovery. A wildlife camera placed near an Emperor penguin rookery was knocked over and subsequently inspected by two very curious penguins. And the resulting footage is nothing short of heart-warming.

The clip starts out with one penguin walking over toward the camera, before promptly bumping into it and knocking it down. The Emperor then moves in toward the camera for a closer look, as another penguin joins the investigation. Around the 9-second mark the two become quite vocal, as if to say, “Hey everyone, we found this weird thing!” The pair then spends the remainder of the clip inspecting the scene, and at one point getting right up in the lens. The video ends with the two shaking their heads back and forth vigorously–perhaps they weren’t impressed with their discovery?

Penguins are highly-intelligent creatures and the look of fascination on their faces as they examine the camera is clearly genuine. According to the video’s description, the footage was captured by Australian Antarctic expeditioner, Eddie Gault, who left the camera recording on ice, at the Auster Rookery near Australia’s Mawson research station. It wasn’t long after he left that the inquisitive birds knocked it over and got up-close and personal.

This isn’t the first time a curious creature unsuspectingly snapped a goofy photo or video of themselves. A self-portrait snapped by a Celebes crested macaque (who was handed the camera by the photographer) lead to a lengthy and comical copyright dispute regarding who owned the rights to the image, the monkey or the photographer.

It’s yet to be seen whether these two Emperors will make a claim of ownership to the above video. But if they do show up in court, you can bet they’ll be dressed impeccably in their best homegrown tuxedos.

The importance of wildlife cameras

Joking aside, wildlife research cameras play an important role in our understanding of the creatures we share this planet with. And though this video is cute, it also reinforces the intelligent nature of these creatures. Moreover, the more we know about Emperor penguin behavior, the more we can potentially do to help protect them from the impacts of global climate change.

Emperor penguins are currently classified as “near threatened” by the World Wildlife Foundation, with just 60,000 Emperors estimated in the wild. And in some places in the Antarctic, their populations have declined by as much as 50% in recent years. So it’s important as ever to protect these fascinating birds.