SpaceBooth Wants To Take Your Portrait Against The Stars

Beam an image up, and get back a stellar version 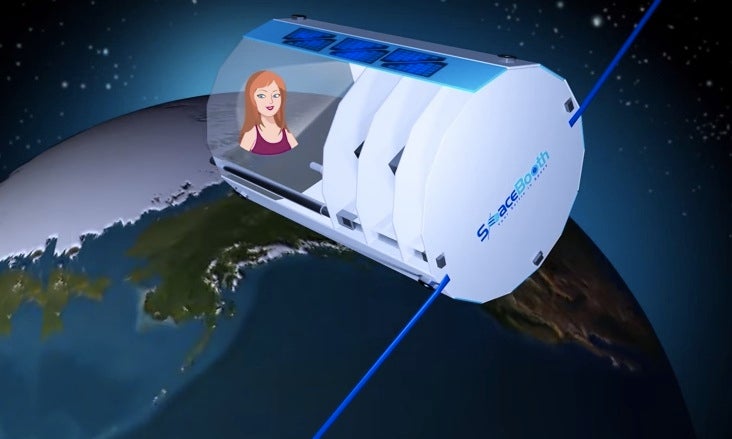 SpaceBooth is a Belgian company that plans to launch its own tiny, tiny satellite photo booth by the end of the year—giving you a chance to get a portrait with the stars, Moon, or Earth behind your head. And all for free.

The way it would work is incredibly simple. You upload an image with the SpaceBooth app (jpeg or png, 2MB or smaller), and it gets compressed at sent up to the satellite. Once there, it’s projected onto an outward facing window, and the SpaceBooth captures a photograph of your image, with the magnificence of space behind you, and sends it back down to you in VGA resolution.

The plan is to put the pico satellite into orbit by the end of the year, where it’ll circle the planet at 321km height (around 200 miles). The satellite itself is described as a tube with 16 sides, with a transparent front end—and it’ll be a bit larger than a smartphone.

Since the satellite is so small and simple, there’s no control of what direction it’s facing—so what the background on your image will be is up to the luck of the draw. If the satellite is in a spin, it might even be a blurry mess. You’re also only allowed one upload, in order to conserve precious bandwidth.

Assuming the SpaceBooth actually launches without a hitch, even with all those caveats it should be a pretty neat project, and one that we can’t wait to see come to fruition. Because even if the images end up looking horrible, they’re still a lot more interesting than most others.