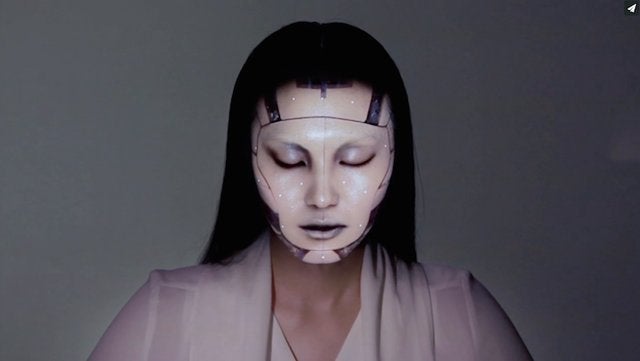 If you’ve ever seen a crazy animation projected onto the side of a building, you’ve encountered projection mapping. It’s a technique that’s exploded in the last few years, and is now commonly used in street art, advertising, and when combined with 3D animations can create an astonishing illusion. But what happens when you use that same technology on a live model?

Omote is a Japanese 3D projection group, and its most recent project is real time face tracking and projection mapping—and you can see it in action below. To put it bluntly, it’s astonishingly cool. What starts with just fairly a minor bit of digital makeup, soon transforms into increasingly elaborate animations and transformations—culminating in real time reflective surfaces, the stuff that’s usually confined to CGI.

If you look closely, you’ll see the model actually keeps her eyes shut the entire time, despite what the animations show. That makes sense, since she has an incredibly bright projector shining in her face—and it’s also one of the downsides of this technique. It won’t be replacing traditional makeup anytime soon, but it does make for a fascinating video.