If an animal takes a photo, who owns it? 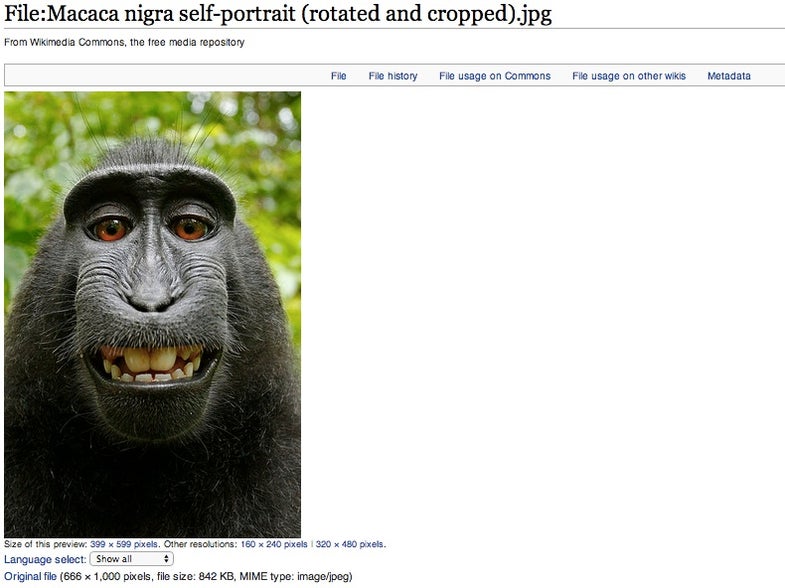 Usually, the issue of who owns a photograph is fairly straightforward. Barring contracts or agreements, the person who pressed the shutter gets it. But what happens if it’s not a person who presses the shutter? That’s a question that’s still proving incredibly difficult for photographer David Slater, ever since a monkey took his camera and grabbed a self-portrait back in 2011.

A celebes crested macaque took Slater’s camera while he was shooting in Indonesia. According to Slater,

Out of the hundreds of images, only a couple came out in focus—and rapidly went viral, but it also raised questions of copyright, questions that exist to this day. Slater didn’t press the shutter button, so some argue that he doesn’t have the copyright—and since monkey’s aren’t capable of owning copyright, then it must be in the public domain. It was a debate that first popped up in 2011 when Slater licensed his images through Caters News, and it’s one that’s going on today.

The most recent arena for this fight is Wikimedia Commons, a repository of Creative Commons and Public Domain images, that as of press time has three copies of the images uploaded. All three of the images are simultaneously marked as “nominated for deletion” due to it being under Slater’s copyright, but at the same time stating “This file is in the public domain, because as the work of a non-human animal, it has no human author in whom copyright is vested.”

Talking to the Telegraph, Slater has successfully had the image removed multiple times—but it has always been re-uploaded by those who think it’s in the public domain. And Slater faces a hefty legal battle if he goes to the courts to get a proper ruling. A number of legal blogs weighed in in 2011, coming out against Slater.

There’s an awful lot to pick apart in trying to figure out who owns the copyright. If we assume the monkey can’t have it (due to not having most legal rights), then that springs up a whole series of other questions. If I strap a camera to an animal, and take images from its point of view, do I own the copyright? What if I’m not triggering the camera directly, but it’s on a timer? What if I set up a wildlife photography trap that’s triggered by motion or sound? Technically, isn’t the animal “pressing the button” then? Does intent matter? What if an animal makes a painting?

It’s definitely a tricky issue, and one that doesn’t seem like it will be resolved soon.