Imagine peering out an enormous window, and seeing the whole planet rotate beneath you 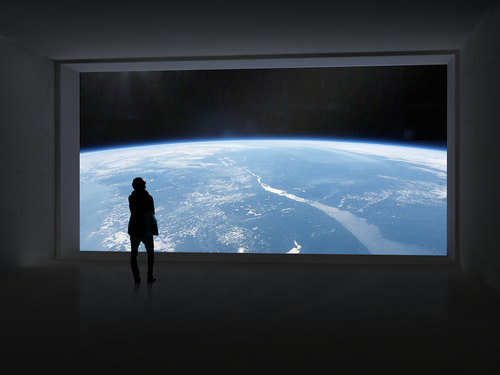 It’s hard to overstate just how powerful of an effect views of our planet have had on the human race. To this day, NASA routinely releases images taken from space, both near and far, that instill a sense of awe in all those who see it. But what if you could look out like an astronaut on the ISS does? What if you could see the the entirety of the globe spinning beneath you—but without having to hop on board a shuttle? That’s what The Satellite is attempting to do, a public installation art project that will give you a glimpse at what an astronaut sees.

The Satellite will be:

The project will take all this data and imagery, and pull it together into a visual simulation of Earth, which will then be displayed using six high-resolution projectors and a spherical screen. You can see some of data visualization below, which gives you a feel for just what it would look like to be staring out over this, but through an immense window.

There’s very little chance that most of us will make it into space in the near future, but hopefully The Satellite will give us a small taste of what it must be like to have that opportunity—and really see what our planet looks like.