FYI: It’s Illegal to Take a Selfie Photo When Running With the Bulls

This guy might get a big fine, but at least he didn't get smashed 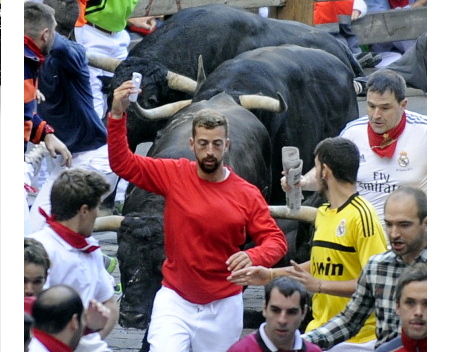 Running with the bulls is a tradition with roots going back hundreds of years. It’s also wildly dangrous and packed with drunken tourists seemingly intent on getting themselves severely hurt. In fact, injuiries and poor decision making at the event are so common, that Pamplona has had to implement some laws to discourage behavior that should, in theory be common sense. That’s why this man, who tried to take a Selfie photo as a huge bull closed in on him, is actually in trouble with the law.

One of the new rules prohibits using unapproved recording devices because runners will slow down and put themselves in precarious situations to get the shot. By stopping, or even slowing down, to grab a photo, he not only put himself in more danger, but other runners as well.

It’s kind of funny that the runner probably expected to get a lot of attention from his online friends for his “extreme” selfie, but instead, he’s getting a ton of global media attention for acting, well, like an idiot.

You can read more about it over at the Guardian.

And bro, if you happen to read this by some chance: Just get a GoPro next time.