It's not perfect, but it adds quite a bit to a drab smartphone selfie 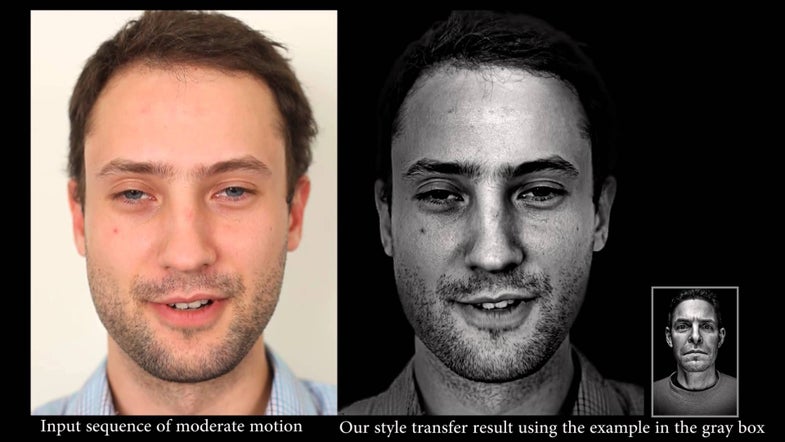 Ever looked at a picture by a famous portrait photographer and wanted to replicate the same look and feel? You could actually buckle down and learn the technique, but what if there was an app for it? The folks at MIT’s Computer Science and Artificial Intelligence Laboratory, with some help from Adobe, have created a program capable of doing just that—making your selfie look like it was taken by a famous photographer.

You can see the technique in action below, and it’s set to be shown at SIGGRAPH 2014. The paper behind it is called “Style Transfer for Headshot Portraits,” and has been put together by MIT’s YiChang Shih and Adobe’s Sylvain Paris, amongst others.

Broadly speaking, style transfer uses the same concept that turns famous analog films into filter packs for Lightroom or Instagram. It mimics existing techniques, and applies them to your images. But rather than doing a global filter over an entire image, this technique uses facial analysis to detect the correct areas of the image and apply local adjustments to mimic the intended style.

As you can see in the video below, the resulting images still look a little unnatural, but it’s an impressive piece of work. It can take a relatively flat image and create a facsimile of professional lighting and color grading.

There are still apparently some problems with the technique—it struggles with reflected light from glasses and when there are major differences between the source photo and the one the rules are being applied to. But who knows, maybe the next Instagram will do more than just mimic old films, it’ll mimic specific photographers, too.