Watch The Force Of A Tornado Captured On Security Camera

A security camera at a church in Tupelo, Mississippi recorded a tornado that hit last week 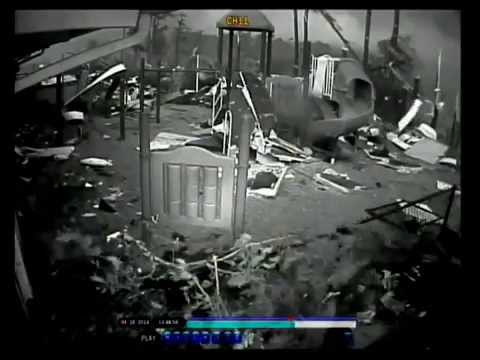 It’s one thing to imagine in your mind just how bad it would be when a tornado hits, but it’s something else completely to actually see the destruction. This video comes from St. Luke United Methodist Church, in Tupelo, Mississippi, where a security camera was trained on a playground. An EF3 level tornado hit the city, part of a recent large tornado outbreak.

The action picks up around 1:15 in the video below, but it’s around 1:45 that things start to get really serious, with trees flying off, and structures being absolutely devastated. The playground didn’t even bear the full brunt of the storm either, some analysis by Dennis Mersereau at Gawker’s weather blog indicates that the playground was probably at least partly protected by other structures.

Much of the nation is still in the grips of severe weather, so if your local area has a storm warning, please be aware of it, and take appropriate safety measures. As this video shows, it takes almost no time to go from mild to incredibly dangerous.