Cop Threatens Journalist For Using a Camera, Gets Fired

Proving, once again, your fundamental right to take photos 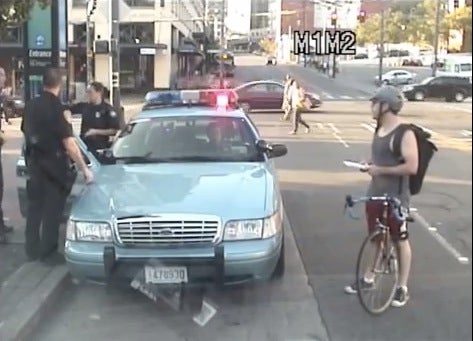 Last July, Seattle journalist Dominic Holden took photographs of a group of police officers around a man. For his trouble, King County Sheriff’s Office sergeant Patrick “K.C.” Saulet demanded him to leave, and threatened to arrest him, even though Holden was fully within his right to be there, and recording. Now, some six months later, deputy Saulet has been fired for his actions, which appear to be the latest in a long line of confrontations with the public.

According to Holden’s version of events, Saulet told Holden that it was illegal to take photographs where he was, and threatened to arrest him if he didn’t leave the block. Saulet, on the other hand, argued that he had a ” civil, professional” interaction with Holden, informing him that he couldn’t ride his bike on Metro property.

Now, after an extensive investigation, the Sherrif has dismissed Saulet, and issued a damning letter. Saulet is cited to have abused his authority, “expressly and/or implicitly threatened to arrest him”, and saying “Your ill-advised actions also play to some of the most basic fears among some citizens, which is that a police officer may indiscriminately exercise his or her power in violation of their rights.”

Saulet allegedly has a long history of negative interactions with the public, with 120 allegations of misconduct, 21 of which were upheld. He had previously been demoted from sergeant to deputy over his actions, and had undergone extensive training to improve his conduct.

You can see more of Holden’s interactions with the police in the video the Stranger released below.