This striated caracara won't be getting a meal from this egg 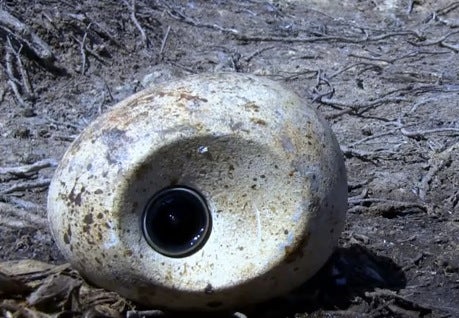 As part of the BBC documentary Penguins – Spy in the Huddle, producers disguised a camera as an egg, placing it in the midst of a rockhopper penguin colony. But, once all the real eggs had hatched, a predator decided the camera looked like a tasty meal, flying off with it, and catching some amazing footage in the process.

In keeping with the long and fine tradition of animals stealing cameras, the striated caracara knocked the camera around a bit, picked it up, swooped away (catching some impressive video), and then losing hold and dropping it below. From there, the camera was further worried by a pair of turkey vultures, before rolling away, and coming back to rest with the remainder of the penguins.

Oddly, the rockhoppers themselves seem slightly less than concerned about the fact that a predatory bird is attacking what appears to be one of their eggs. So either they’re smart enough to know it’s not real, or aren’t too concerned about egg preservation.

[via the Verge, Gawker]