Watch Chase Jarvis Crash a Drone in the Icelandic Ocean 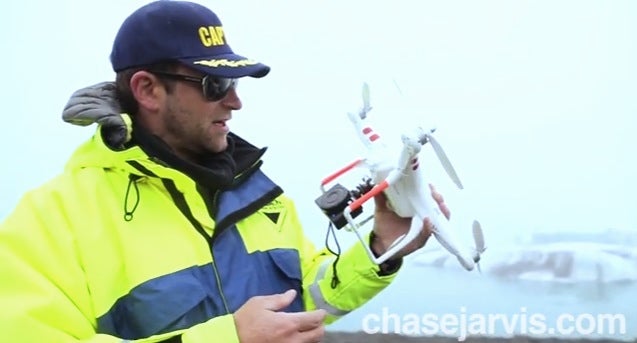 Famed photographer Chase Jarvis recently had the chance to play with a DJI Phantom during a trip to Iceland. Unhappy with the image quality from its usual GoPro attachment, he instead loaded up a shiny, new, Sony RX100 II, and took that out for a test flight. The results are just about a worst case scenario: the whole thing fell into the ocean, lost without a trace.

The DJI Phantom has been the main culprit in an explosion of drone photography. With a street price starting at around $480, these affordable drones can be easily obtained, and have been used to capture some amazing footage. The Sony RX100 II is widely regarded as arguably the best compact camera currently available, and with its Wi-Fi remote control capabilities and image stabilization, Jarvis thought he could coax better results from it than he could a GoPro.

But the problem with drones is that they can crash. And Wi-Fi controls have a pretty limited range. Which means that this experiment ended up with the whole rig falling into the ocean, and no images making it out in time. More than $1000 of gear, lost beneath the wavess