Russian Photographer Captures These Incredible Snowflakes with a Compact Camera

Proving once again that talent and creativity trump gear 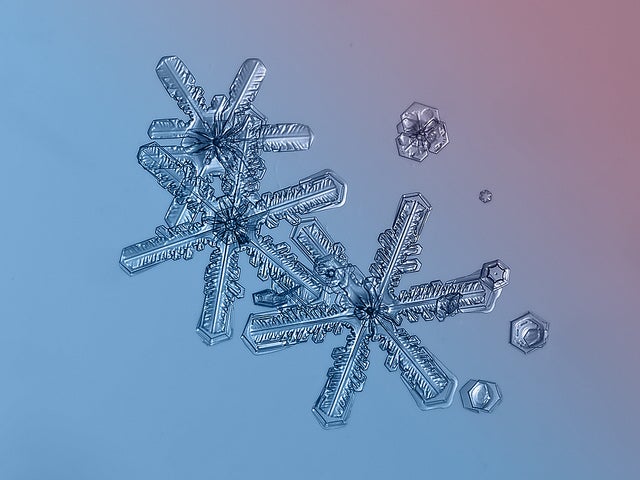 Russian photographer Alexey Kljatov (aka ChaoticMind75) has captivated the internet with his incredible macro work of snowflakes, which are shot in a surprisingly low-tech way.

His photos, which you can see on his Flickr account, are astonishing closeups of snowflakes, each of which are rendered beautifully and clearly in almost unreal detail.

But what makes his work so much more impressive is how basic the hardware is that he uses to do it, which he explains in a blog post. His primary camera is a Canon A650, a 12-megapixel camera from 2007. With the camera at its maximum zoom, he then shoots through a reversed Soviet Helios 44M-5 lens, functioning as a macro extension. The front of the whole setup then has series of extension tubes to maintain the perfect distance from the snowflakes, which he shoots on glass.

But that only accounts for magnification — what about the amazing clarity of the photos? He also talks about that in another blogpost — and he uses Photoshop, Noiseware denoising plugin, and the Hugin panorama stitcher. Kljatov takes multiple RAW photos of the snowflakes at base ISO, which he averages to cancel the noise, runs through the denoising plugin, and then aggresively sharpens. All of which contributes to a series of images that are incredible in their clarity.

So with some hard work, some basic hardware, and an understanding of editing tools, Kljatov has managed to turn a six year old point-and-shoot camera into a device for astonishing macro work.