Watch Condors in the Wild with Condor Cam

They're a lot less cute than Shiba Inu puppies 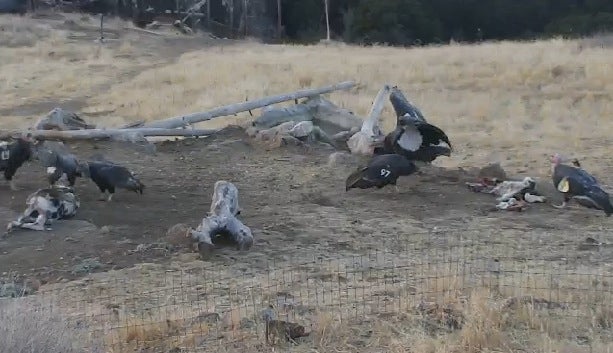 Condors aren’t exactly what you’d call the most cute and cuddly of creatures — but they’re no less important for that. Currently significantly endangered, there are less than 500 known specimens of the California condor, and for the first time, you can watch them in the wild via a streaming camera.

The Condor Cam is part of a project to help reintroduce condors to Big Sur, and is pointed right at one of the main feeding areas for a flock of California condors. Several times a week, scientists from the Ventana Wildlife Society put out food for the condors at the site, which is located in the Los Padres National Forest.

This remote location meant that a significant amount of work was required to get a live feed up and running — it ended up costing $15,000 to create the system, with help from FedEx and the Oakland Zoo. The camera itself is solar powered, with a T1 connection established at a house some 12 miles from the site, which is then relayed via antennae to the webcam itself.

The video footage is being used to help introduce zoo raised condors back into the wild, and also observe the local population as they feed, preen, and generally live their lives.

While it’s not as cute as a camera aimed at a panda enclosure, the Condor Cam is still an intriguing look into the lifecycle of a very rare bird.