Why Did That Priest Threaten to Stop the Ceremony Because of the Photographers?

What's the story behind this viral video? 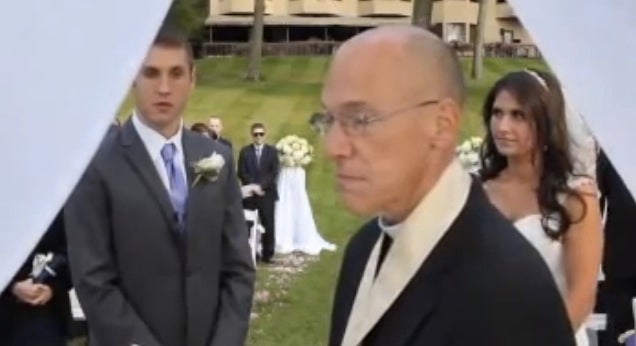 Over the last week, a video has gone viral of a priest threatening to stop a marriage ceremony mid-service if the photographers don’t stop what they’re doing and leave. Since the video first popped up just over a week ago, it has received more than 600,000 views, and spread widely across Facebook, news programs, and blogs the world over. But what’s the story behind this officiant’s frustration, and the obvious discomfort in his actions from the couple?

The priest himself hasn’t popped up to give his side of the story, but it turns out the photographers have. Dhoom Studio has put up their side of things, both on their website, and in the comments over on the Knot. By photographer Kamrul Hasan’s account, he asked the priest if there were any restrictions as to where they could shoot from, and the man said not to be in the aisle — which they avoided. But even so,they obviously frustrated the priest enough for him to snap at them. And apprently he hadn’t mentioned to the bride and groom any restrictions at all.

It seems that Dhoom Studio did the right thing by asking the priest about restrictions before the event, and even that wasn’t enough to placate him.