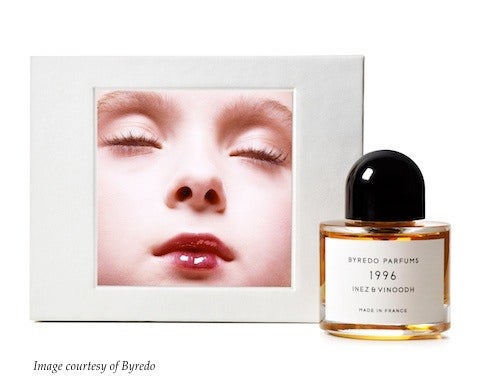 Inez van Lamsweerde and Vinoodh Matadin are a Dutch couple who are two of the biggest names in fashion photography. Just this year they’ve shot for Dior, Miu Miu, Valentino, and even directed the new Lady Gaga music video. But now they’ve turned their skills to the other side of fashion, and have developed a perfume that’s based on their photograph Kirsten, 1996.

The scent is dubbed 1996, and was created in conjunction with fragrance maker Byredo. Each box is decorated with a print of the original photograph, and the pair likewise designed jewelry collection — both of which will be available at Barney’s.

Talking to the Barney’s blog, the pair describe their process of developing the fragrance:

On the Byredo site, the scent is described as having top notes of juniper berries and black pepper, a heart of violet, leather accord, and orris, and base notes of patchouli, black amber, and vanilla.

Usually, it’s photographers who are working with an existing fragrance to make a photo campaign. It’s very interesting to see the process go in the opposite direction.