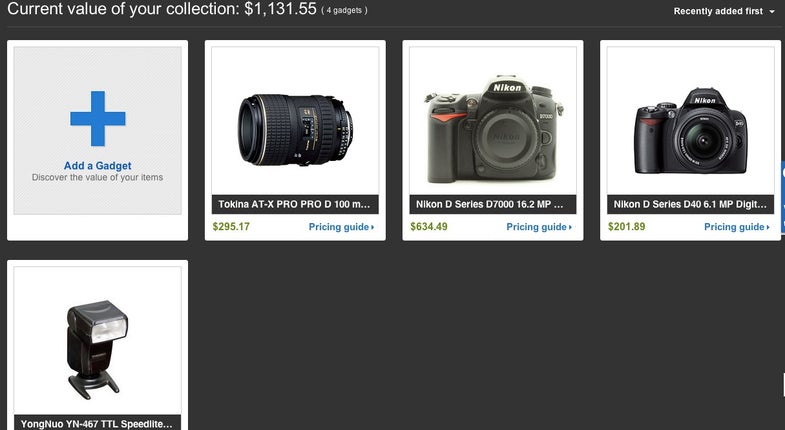 eBay’s newest feature is called “My Gadgets“, and it collates all of your gear into one place (and makes it that much easier to sell if you want to be rid of it).

With My Gadgets, it’s simply a matter of adding any and all gadgets you have floating around to a personal library of gear. That means TVs, computers, video games, tablets, old smartphones — and most especially, camera gear. As you add the gear, the system lets you specify if it’s new or used, and tells you the average going price for it.

Also, anything that you’ve bought directly through eBay seems to pop up on its own, like my cheapo YongNuo flash did.

While it’s certainly handy as a way for you to keep tabs on all the little geegaws and doodads you’ve got floating about, it’s pretty clear that the main point of this exercise is to make it that much easier to sell your gear if you want to be rid of it. According to The Next Web, once you tell My Gadgets to sell something, you’re able to add a lot more info, like a title, better descriptions of its condition, a pricetag, and photos of the object itself.

The price estimates it gives you are based on a “14-day rolling average for the same or similar products listed on eBay in the same condition (new or used)”, so it gives you a pretty good idea of what the street value of your gear is. If nothing else, it means that even if you want to try and sell something on Craigslist, it’ll give you an idea of what’s a good asking price.