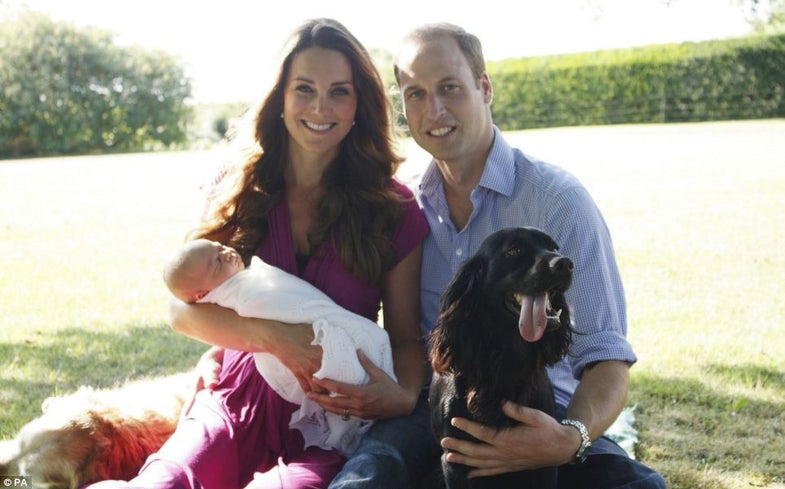 Portrait photography is a tricky thing. If you’re inexperienced, even the most attractive models can end up looking bad. For the first official photos of a newly-born prince, you’d assume the job would fall to a seasoned pro. But, instead the first images come from Princess Kate Middleton’s dad and his point-and-shoot camera. The results aren’t very good, and that has some people extremely angry. They shouldn’t be, though. I have a feeling some of the crumminess is intentional.

As you can see in the image above, the photos have a lot of problems. Blown highlights, a crooked horizon, and awkward cropping are just a few of the many obvious technical shortcomings. If they had paid any amount of money for a photographer to turn in this kind of work, they would have gotten ripped off.

However, this wasn’t taken by a pro photog, it was shot by the baby’s grandpa and that’s exactly what it feels like. The Royals have gone far out of their way to make the prince and princess seem a lot more like William and Kate. If they released photos of them in a palace, that effect goes down the drain. In fact, your Facebook feed is probably full of photos that look just like these right now.

They also claim that they didn’t feel like bringing a pro photographer into the mix to interrupt their family dynamic. With a family that is in the spotlight so much of the time, that seems kind of understandable. Though, it seems odd that they wouldn’t have at least one pro shooter with whom they felt comfortable.

In the end, I think they would’ve been better off still hiring a pro and opting for something more natural, but if grounding the couple in reality was part of their motivation, I certainly understand the move they made. It has actually been sort of entertaining looking through the papers that have run the photo and checking out the length to which they have tried to fix them up.

In the future, we’ll no doubt see many professional portraits of this kid, so don’t fret if that’s what you’re hoping for. What do you think? Should these shots have stayed on the royal Facebook page? Or does it make sense just to put images out when the whole world is apparently clamoring for them?