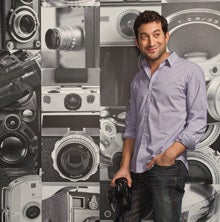 When it comes to stock photography, Shutterstock is still arguably the biggest player on the market. And its popularity has paid major dividends for Shutterstock founder Jonathan Oringer, who is now worth more than a billion dollars.

According to Bloomberg, Oringer’s 55 percent stake in the company is valued at $1 billion thanks to a precipitous climb in share price. Oringer has 18.5 million shares in the company, and since it went public last October, the share price has more than tripled. His billion dollar worth has caused Oringer to be labeled “Silicon Alley’s first billionaire”

Oringer at least has his own foot in the world of photography, he founded Shutterstock with his own work, and has tens of thousands of images up on the service. With three quarters of a million customers, a rapidly expanding worth, and a huge userbase, do you think any of this success will be passed on to the photographers? Will Shutterstock celebrate its success by upping payrates? Most likely not, but for a lot of photographers struggling to make do selling stock photography, the fact that the site’s founder is now a billionaire may cause them to take a second look at just how much they’re being paid.