Behind the Scenes at ESPN’s “The Body Issue”

Every year, ESPN magazine shoots some of the world's greatest athletes in the nude — here's how they did it in 2013 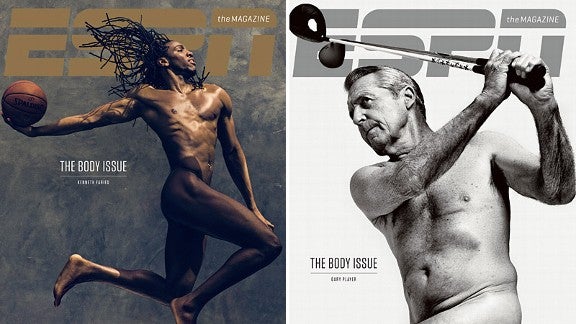 ESPN magazine’s Body Issue has become an annual celebration of the physique of some of today’s premier athletes. The photos span an array of body types, ages, and shooting styles. The Body Issue has been running since 2009, and is a monument to the machine that powers Olympic and professional athletes alike: their bodies. Shot nude.

In celebration of this year’s issue (and its eight covers), ESPN has released behind the scenes looks at the various photos shoots. You can see the entire playlist here, and we’ve also embedded it below. There are 13 parts to the series, which run in length from less than a minute to nearly five. There’s not a huge amount of technical information about how the shots were made, but it’s still an intriguing look at what goes on behind the scenes.

You can see all 54 of the final pictures here. While generally showing up in these shoots is seen as an honor for an athlete, it hasn’t gone off completely without a hitch. Tennis star Agnieszka Radwanska has been getting some heat for her shots in her native Poland, and has responded over social media.